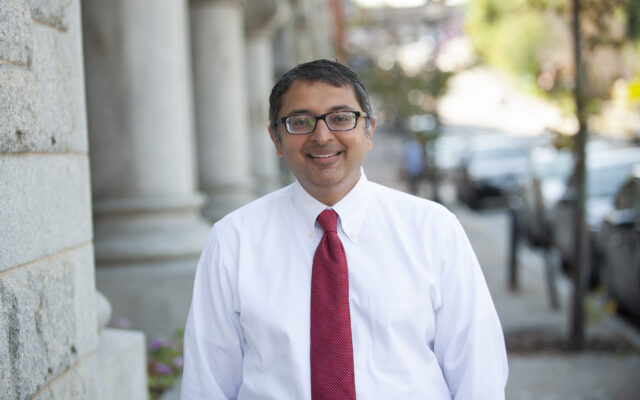 Contributed • April 19, 2021
Partners for Peace, the domestic violence resource center for Piscataquis and Penboscot counties, faced many challenges during the COVID-19 pandemic, but the organization continued to support survivors and worked to improve stability and inclusivity. This was celebrated, awards were presented and the 70-plus attendees heard from keynote speaker Maine CDC Director Dr.

Partners for Peace, the domestic violence resource center for Piscataquis and Penboscot counties, faced many challenges during the COVID-19 pandemic, but the organization continued to support survivors and worked to improve stability and inclusivity. This was celebrated, awards were presented and the 70-plus attendees heard from keynote speaker Maine CDC Director Dr. Nirav Shah during the virtual annual meeting on April 15.

Dr. Shah said when thinking of COVID, the biological consequences often come to mind but “issues like domestic violence and intimate partner violence have been exacerbated and magnified by the pandemic.”

“We can forget there can be epidemics of different sorts that have the same degree of consequences,” he said. “For individuals who are grappling with or are fearful of an unsafe home or living situation or an unsafe personal relationship, the loss of work, the loss of income, stressful expectations, each and every one of those things is magnified tenfold.”

Dr. Shah said the Maine CDC has tried to include support for those experiencing domestic violence and intimate partner violence in its programs. He said staff have been trained to screen at health clinics, in-person and virtual, and when doing visits public health nurses are empowered to do referrals for services.

“Data shows that communities of color, for example, experience disproportionate impacts of domestic violence and intimate partner violence,” Dr. Shah said, saying some reasons include less access to key services and being in lower income brackets.

“Maine CDC is reestablishing our office of health equity to explore and implement systemic changes that can be implemented across our public health system,” he said. “The goal is not just to improve outcomes for Maine’s communities of color and Maine’s disaffected communities, but also for example the LGBT community and others that have had systemic barriers to having true and equal access to health services.”

He concluded by thanking Partners for Peace and all the state’s domestic violence resource centers, “You help keep Maine a safe place for all Mainers.”

“It’s been quite an interesting year and we are so proud of all that we have accomplished given all the adversity,” Executive Director Amanda Cost said. She thanked volunteers, staff and the steering committee for attending to business with grace and compassion.

Steering Committee Co-Chairperson Denise Scuderi thanked the organization’s corporate sponsors and said Puritan Medical Products would be matching donations — up to $5,000 — made in recognition of the annual meeting.

“2020 was quite the year — no one could argue [with] that,” Steering Committee Co-Chairperson Joe Locke said. He said staff and volunteers needed to adjust quickly and “although some services were suspended for a period of time, the helpline always remained open.”

“In-person support and education advocacy groups were paused while advocates worked to create a safe and virtual platform for survivors to gather,” he said. Locke said 110 survivors later could share stories in an online setting “while navigating difficult safety challenges and ultimately finding camaraderie.”

Cost said the organization has worked to develop an inclusivity pledge for all, and as priorities are set, voices from people on the margins will be included as well as input from local and national coalitions.

“Diverse voices will help drive our mission and center our values as we own our responsibility to corrective action,” she said.

Susan Ahlin, a survivor leader for Partners for Peace who soon will be a direct services advocate for the organization, told the virtual audience about spending her life surrounded by violence. Ahlin said she believed there was more to life than simply surviving but she did not know where to find this.

“How could I break through that cycle and live a life of peace and stability?,” she said. “I was discarded by an abuser, defeated and barely able to peel myself off the floor. My trauma responses ran amok, a knock on my door would send me into a week-long anxiety attack or a Christmas card with no return address would have me looking over my shoulder in fear of being followed and dragged back into what I had survived.”

Ahlin said she moved to a new state with no support network and three children to care for. “I felt hollow, depleted of everything except my absolute terror,” she said.

Partners for Peace programs “taught me boundaries and validity. They taught me to identify my abuse and give it names like gaslighting and manipulation, red flags,” Ahlin said. She learned skills to protect herself and help her family recover, and staff were with her every step of the way.

Saying she has been lucky, Ahlin said that upon completing college in the near future she will give back as a direct services advocate for “an organization that inspired me and showed what happened is not okay but I could heal from it.”

“We found ourselves in a world where we need those resources more than ever before and they aren’t always there,” Ahlin said. “Without those supports I may not have been able to be here today. Standing on my own two feet, I am proudly announcing ‘I am a survivor.’”

The first honor bestowed was the Michelle Alexander Award, named for a long-time volunteer and given to a recipient who shares the namesake’s commitment to the organization.

Carla Suel of Dexter was recognized for the more than 350 hours contributed last year to help 100-plus survivors through the helpline, facilitating support groups and being a mentor and trainer for new advocates.

Rural Legal Services Coordinator Cindy Freeman Cyr said the Partners in Change Award is given to a community partner “in recognition that every person’s safety exists in the cultural context we create every day.”

Maine Humanities Council Board Chairperson Mazie Hough accepted the honor as Freeman Cyr said the council began working with Partners for Peace a decade prior. This has offered an opportunity for people to gain an understanding of those affected by domestic violence “by connecting through drama, books, poetry and big ideas and we certainly have,” Freeman Cyr said.

Cost said MaineTransNet embraces the mission of Partners for Peace and “creates communities where all people are treated with respect and differences are celebrated.” She said MaineTransNet provided training for domestic violence advocates on barriers facing trans people and “how some traditional models hold up those barriers rather than breaking them down.”

Director of Advocacy and Outreach Services Angie Alfonso presented the Dove Award to a person whose values reflect those of Partners for Peace, and the 2021 honoree is Freeman Cyr.

“Cindy has a legacy of more than 20 years as a founder, as a leader and as a visionary,” Alfonso said. “Over the years Cindy has worn many hats in our organization but has always been a staunch advocate and has helped countless survivors — whether it has been to secure a protection order, access stable housing, flee to a safer location, access community resources and create a plan for safety that has not only helped them to survive but to thrive.”