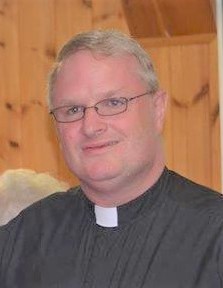 Fr. Damboise, who was born in Caribou but raised in Augusta, was ordained to the priesthood on June 7, 2008 at St. Mary of the Assumption Church in Augusta. From June of 2008 to July of 2012, Fr. Damboise served as parochial vicar at the Parish of the Precious Blood in Caribou. In July of 2012, he was appointed parochial vicar of Prince of Peace Parish in Lewiston, where he served until July of 2015, when he was appointed pastor at the Greenville and Jackman parishes. Before entering the seminary, he worked as a behavioral specialist with children with mental health issues and as a case worker for children with developmental disabilities.

Born in 1977, Fr. Hyacinth is the middle child of seven children in his family. He entered formation after graduating high school and completed his clerical studies at St. Thomas Aquinas Major Seminary in Bambui, Cameroon, where he earned bachelor’s degrees in philosophy and divinity. Fr. Hyacinth was ordained to the priesthood on March 27, 2008, by Bishop George Nkuo. Since his ordination, Fr. Hyacinth has served at parishes in Cameroon, including as curate at Christ the King Parish in Jakiri (2008-2009); curate at Holy Family Parish in Tabenken (2009-10); pastor and manager of schools at St. Kizito Parish in Sabongari (2010-13); and principal of St. John Bosco Catholic Comprehensive High School in Ngarum (2013-16). He also served as a dean and member of the Presbyteral Council for six years before coming to Maine. In January of 2017, he was appointed parochial vicar at St. Brendan the Navigator Parish, where he serves today.

A graduate of St. Dominic Regional High School in Lewiston, he received a bachelor’s degree in French from Norwich University in Vermont and a master of divinity degree from St. Mary’s Seminary in Baltimore. He was ordained to the priesthood on May 9, 1987, at Saints Peter and Paul Church in Lewiston (Basilica of Saints Peter and Paul today). After being temporarily assigned to St. Louis Parish in Fort Kent, Fr. Malo was named parochial vicar at St. Joseph Parish in Biddeford in August of 1987. He was again assigned as parochial vicar to St. Louis Parish in Fort Kent in August of 1992, when he was also named chaplain at the University of Maine at Fort Kent.