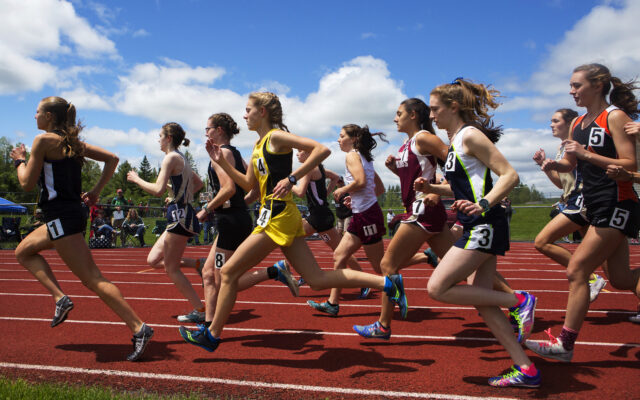 Contributed • April 17, 2021
By Ernie Clark, Bangor Daily News Staff The high school outdoor track and field regular season is set to begin, but its conclusion remains to be determined. The Maine Principals’ Association is surveying member schools that field track teams about how to conduct state championship meets during the COVID-19 pandemic.

The high school outdoor track and field regular season is set to begin, but its conclusion remains to be determined.

The Maine Principals’ Association is surveying member schools that field track teams about how to conduct state championship meets during the COVID-19 pandemic.

Issues include how to comply with the state’s 6-foot physical distancing mandate and masking requirements at state meets, which traditionally attract large gatherings of athletes, coaches and spectators.

“Those are the primary concerns we are working with,” MPA interscholastic Executive Director Mike Burnham said.

One way to accommodate physical distancing directives may be to reduce the number of participating athletes. Survey questions include whether to split the boys and girls championships into separate events, altering qualifying standards for the events within the meet, limiting team members in attendance to event qualifiers and whether to modify or eliminate relays, which involve the most athletes of any event.

“In our heart of hearts we would certainly love to open it up and run a track meet with the number of participants we’ve always had and give everybody an opportunity,” said Craig Sickels, athletic administrator at Freeport High School and chair of the MPA’s outdoor track and field committee. “But with COVID and the restrictions and the spacing and limitations, I just don’t think that’s a realistic expectation this year.”

Another question asks if the track committee should develop a facemask rule that includes a three-strike policy resulting in possible disqualification, similar to one the Penobscot Valley Conference developed for this season.

“We felt we’d rather start off stringent and be able to ease off if the state lifts some of its guidelines than try to tighten things up as we got down toward the big meets,” said Orono High School Athletic Administrator Mike Archer, the PVC outdoor track and field committee chair.

The survey also asks if there should be any restriction on the number of spectators allowed at the state championships.

A lingering question is how many attendees translate to 100 percent of capacity at a track and field venue.

“It’s not so much a number but the spacing, that regardless of the number everybody’s got to be spaced as best as possible,” Sickels said of the state’s interpretation.

The Kennebec Valley Athletic Conference, which usually holds separate Class A and Class B meets at the same location on the same day, is dividing its championships into four meets over two days to reduce attendance. The three largest divisions each will have six schools while the small-school division will have seven schools.

Ryan LaRoche, athletic administrator at Leavitt Area High School of Turner Center and chair of the KVAC track and field committee, said that league also plans to reduce the number of qualifiers for each event. Races that are contested in lanes will be limited to 16 participants, or two heats on an eight-lane track, while distance races and jumping and throwing events will feature the top 12 qualifiers.

The KVAC, PVC and Western Maine Conference all are increasing their number of regular-season meets but having fewer teams at each event. Many of those also will be regionalized to address transportation issues.

Under the physical distancing mandate, buses can accommodate between 26 and 28 people, meaning multiple buses are required to transport larger teams at a time when there is a shortage of bus drivers in many communities.

“We’re all going to have to be creative, but we’ve been in this creative mode for quite a while now,” Archer said.

The PVC, which save for Class A Bangor, Brewer and Hampden Academy consists of smaller schools in Classes B, C and D, had scheduled four track meets a week, each with seven to nine schools.

This year the league will have six meets weekly with fewer schools at each event.

“The meets are smaller, which means they’ll go quicker and allow teams to be more spread out with smaller crowds, so we feel like we’ve got a pretty good plan there,” Archer said.

The PVC will continue to hold its small-school and large-school championships on back-to-back dates. Archer said the league likely will stick to its qualifying standards but may limit athletes attending the conference meets to those who have qualified.

“If 21 kids qualify for an event, we’re not going to adjust the standards to take 16,” he said. “We feel like it’s a championship event so if they qualify they deserve to go.”

Schools are asked to return the completed surveys by April 30. The MPA’s outdoor track and field committee will meet with state championship meet directors and site directors on May 13 to discuss the feedback and formulate plans.

“It will give the schools a chance to have a couple of meets so they can share some ideas about what went well and what maybe didn’t go so well for them,” Burnham said. “We’re not reinventing the sport of track. We’re just looking at how we can do this safely and follow the restrictions that are currently in place.”