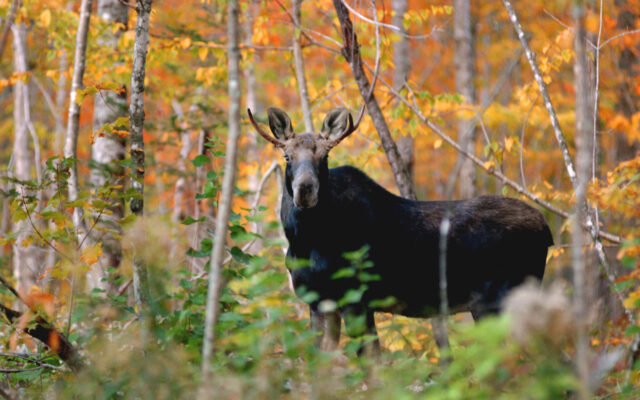 Maine moose are in trouble

Contributed • April 15, 2021
By Bob Duchesne, Bangor Metro The balance of nature is a beautiful thing, except when it isn’t. Moose are in trouble.

The balance of nature is a beautiful thing, except when it isn’t. Moose are in trouble. Although Maine’s moose population is stable, the herd is sick, and getting sicker.

Maine has the highest population of moose in the lower 48 states, perhaps too high. Nature has a way of correcting over populations, and it’s often not pretty. Predation, disease, and starvation are some of nature’s tools.

For moose, the winter tick is today’s main culprit.

The balance has swung wildly. A century ago, only about 2,000 moose were left in Maine, due mostly to overhunting. Improved conservation over the ensuing decades allowed populations to rebound. Then, timber harvests and spruce budworm infestations opened up the forest. Regenerating saplings and shrubs created a bounty of food that moose could browse, without predators to worry about. By 2012, the population had exploded to 76,000, as estimated by the Maine Department of Inland Fisheries & Wildlife.

When trouble came, DIF&W biologists were quick to notice.

Winter ticks have been in Maine since at least the 1930s, when they were first documented. Most ticks have a two-year life cycle. Winter ticks go through all their life stages in one year, and they prey primarily on just one species — moose. In the fall, they cluster in huge masses, waiting for a moose to brush by. The unlucky victim can suddenly find itself the host of 50,000 to 90,000 ticks. The ticks feed all winter, dropping off in the spring to lay eggs for the next generation. If the winter is long enough, they drop off into snow and die.

As the climate has warmed, Maine winters have shortened. Now this huge mass of winter ticks is more likely to drop off into leaf litter, vastly increasing the next year’s tick load. As moose and tick populations increased simultaneously, moose began to suffer. Maine’s population remains stable, but the warning signs have become obvious. Calves are dying. In one district, half to three-quarters of the collared calves failed to survive their first winter, with that trend repeating over several years of the study.

Worse, reproduction rates have plummeted. In the 1980s, one could expect to find four calves per hundred cows. Over the last decade, that number has been cut in half. Moose cows formerly produced twins 42 percent of the time. Over the last decade, twinning occurred only 19 percent of the time. Cows are also getting older before first getting pregnant. Though adults stand a good chance of surviving the agony of winter ticks, they are much weaker for it. Many have scratched against trees in hopes of relieving the itch, removing the fur that protects them against the cold. Sapped of strength, cows ovulate less.

Across North America, the typical density of moose in a healthy herd is one moose per square mile. In a few places, up to three moose occupy a square mile without consequences. In the areas of Maine where the moose herd is least healthy, there may be five or more moose per square mile. For the winter ticks, overpopulation is an all-you-can-eat buffet. Climate change has tipped the balance against moose, and nature will reduce the herd one way or another.

One answer is simply to let nature take its course, but Mainers have little tolerance for widespread pestilence in any wildlife population, let alone a charismatic species such as moose.

Another solution is to reduce the moose population to sustainable levels, but after years of careful research, DIF&W’s biologists are loath to apply a broad solution without testing it first.

In a district along the Quebec border, above Seboomook Lake, moose density exceeds eight per square mile. If all goes according to plan, the department will divide that district, and grant sufficient hunting permits this autumn to reduce the population to a sustainable level in one of the two halves. They can then measure and compare the effects on both the moose population and the tick load. Their ambitious goal is nothing less than finally discovering how to break the tick cycle.