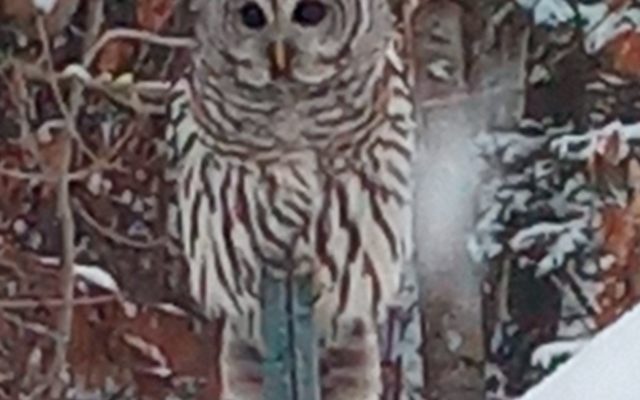 Contributed • March 18, 2021
By Bob Duchesne  Winter ended March 15. That is, the winter portion of this year’s Maine Bird Atlas project ended on March 15.

Winter ended March 15. That is, the winter portion of this year’s Maine Bird Atlas project ended on March 15. The summer portion has already begun. That is, summer began on Jan. 21, when any romantic behavior between great horned owls could safely be considered breeding behavior.

The Maine Department of Inland Fisheries and Wildlife is managing the project, using volunteer-collected information to map the current status of birds in Maine. By comparing the data to a similar survey done 30 years ago, biologists can measure macro changes to the state’s environment and habitats. The five-year project is entering its fourth year. A number of lessons have been learned over the first three years, but one of the biggest is this: Anybody can participate.

It’s simple. The entire state has been divided into blocks, 3 miles long and wide. Volunteers spend whatever time they can within a block, listing all the birds they identify. Once a block has received at least 20 hours of combined effort, it is considered complete. Scouts may not have found every bird present, but they are assumed to have found enough to provide a statistically valid sample.

Here’s my first rule of birding: The most common birds are the most common. Most of what we see are ordinary, plentiful backyard birds. Think crows. They count. For the atlas, counting a robin is just as important as counting a rarity. That means even casual birders can contribute to science, often just by wandering their neighborhoods.

Think I’m kidding? Most of the surveying is being done where people live, in the more populated areas of Maine. Not as many birders are exploring the remote sections — an area I happen to love. Since mid-December, I have walked miles of logging roads, one block at a time. I’ve walked the Stud Mill Road from Milford to Alligator Lake. I’ve walked the 15 miles from Kokadjo to the Golden Road. I’ve walked from Route 201 in Jackman almost all the way to Holeb. And what did I count? Mostly very normal birds. Probably 90 percent of my total consisted of chickadees, nuthatches and woodpeckers — the same birds you might recognize easily in your own backyard. No special expertise required.

Of course, in summer, when all of the songbirds return, there are many more birds to identify.  But the rule remains: The most common birds are the most common. Even a total non-birder can recognize a blue jay.

The project is interested only in birds using the state in summer and winter, disregarding birds that are merely passing through. But since migration and nesting happen at different times for different birds, each bird has “safe dates” attached when it can be safely presumed they are summering or wintering here. The great horned owl is the earliest breeder among all Maine birds. They started getting frisky in mid-winter. Pigeons and house sparrows became countable at the beginning of March, and bald eagles entered their safe date period this week. By June 1, most birds will be countable.

Now is a particularly good time to jump into this project. Things won’t get busy until the days are longer. There’s ample time to learn more about how the atlas works, and what tools are useful. Between seasons, project leaders have more time to educate and answer questions. Volunteers are even treated to Wednesday question and answer sessions on Zoom, often with educational tidbits. Last week, it was all about the many strange, unfamiliar noises owls can make.

Indeed, the atlas is making new discoveries about owls. Until recently, eastern screech owls were not known to nest in Maine. The summer atlas shows that they are now breeding north of the New Hampshire border — one of several dozen birds that are moving north with climate change. Meanwhile, the winter atlas is showing an influx of short-eared owls this year.

To sum up, participation in the Maine Bird Atlas is easy, and anybody can do it. The most difficult part of the whole process is wading through the background information at maine.gov/ifw/fish-wildlife/maine-bird-atlas/.

Fortunately, every region has a local expert standing by to assist. For instance, I am the regional coordinator for the Greenville region, even though I live two hours away. Isn’t that such a Maine thing? Mainers tell distance not by the mileage, but by how long it takes to get there. And two hours is close, by Maine standards. It could be worse. My wife, Sandi, coordinates the Jackman region, which is three hours away. That’s almost close.

Duchesne serves as vice president of Maine Audubon’s Penobscot Valley Chapter. He developed the Maine Birding Trail, with information at mainebirdingtrail.com. He can be reached at duchesne@midmaine.com.