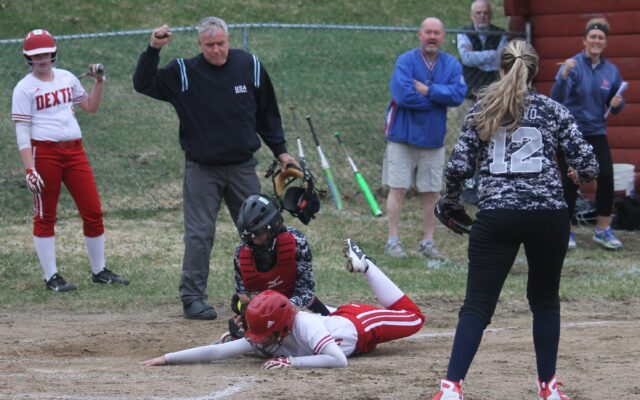 Stuart Hedstrom • March 3, 2021
MILO — A winter sports season played under many adjustments during the COVID-19 pandemic is nearing an end, and in several weeks a modified spring sports season will start. SAD 41 officials learned more during a school board meeting conducted over Zoom on March 2.

MILO — A winter sports season played under many adjustments during the COVID-19 pandemic is nearing an end, and in several weeks a modified spring sports season will start. SAD 41 officials learned more during a school board meeting conducted over Zoom on March 2.

Mills said the middle school cheering team recently won its division, with the routine taped to be judged at a later date. He said the middle school basketball teams each appeared in the postseason, the high school girls were set to play at Dexter Regional High School in a semifinal and the high school cheering team is also recording its performance for the Penobscot Valley Conference competition and will do likewise for the upcoming state championship.

“I would like to thank all my coaches for the work they have done this winter and the student athletes — they have had a lot asked of them,” Mills said. He said the players needed to wear masks while playing and practicing, took to the court without any fans and followed a number of health and safety guidelines.

“I feel like the winter season has been a success,” Mills said.

“I feel like the spring season is going to look a lot like the winter and fall seasons,” he said, such as athletes needing to wear masks and limits on numbers at the playing fields. The athletic director said the state has not yet released specific guidelines for the spring sports season, which was canceled entirely last year.

Mills said in the past the baseball and softball teams have traveled together but in 2021 one team would likely be playing at home while the other is on the road. “I would say baseball and softball will stay in their pods,” he said, as the schedule is made up of a small number of opponents from the region as was done for soccer and basketball.

Mills said he is unsure of how track would compete as typically meets have more than 100 present between male and female athletes, coaches and officials without the presence of spectators.

In other business, Superintendent Michael Wright brought up several items in his report.

He said the next meeting on the proposed regional high school is scheduled for 6 p.m. on Tuesday, March 16, on Zoom.

“I would anticipate this spring a series of meetings to be held to inform the public about this project,” Wright said.

“This region has been given the opportunity from the state to have a comprehensive high school,” the superintendent said. He said about $100 million is earmarked  for a school offering a variety of academic programs from high school to college — through the University of Maine and Maine Community College systems — and training and certifications in various industries via a number of business partnerships. Similar education models are used in other states, including Massachusetts and Connecticut.

The project participants currently are SAD 41, SAD 46 of Dexter and the Guilford-based SAD 4 and in part with the Tri-County Technical Center in Dexter and the Greenville and Jackman schools via distance learning agreements.

“We’ve talked about one of the key components and that is where this project would go,” Wright said. He said the location of a proposed regional high school is one reason why a project in the Fort Kent/Madawaska area, that was ranked ahead of the local institution on the state scoring list, fell apart.

The state will work with local officials to help determine a site best suited for the project, which would be subject to future votes at the local level to see if individual districts would like to continue participating.

“We’ve started budget talks. March is usually a big month for that so I would expect by the April meeting you will hear a lot more about that,” Wright told the school board.

Later in the meeting Piscataquis Valley Adult Education Cooperative Carolyn Haskell said that the proposed 2021-22 budget for the organization would be flat-funded from the current academic year.

“There are no changes to the cooperative assessments,” she said.

Haskell said in the last year 46 students from the SAD 41 communities have completed high school through the PVAEC, with 22 being in the 16-20 age group.

The school board has been meeting over Zoom for nearly a year but the decision was made to meet in person for the next session — set for 7 p.m. on Tuesday, April 6, at Penquis Valley. Wright said board members who would prefer can still attend remotely.