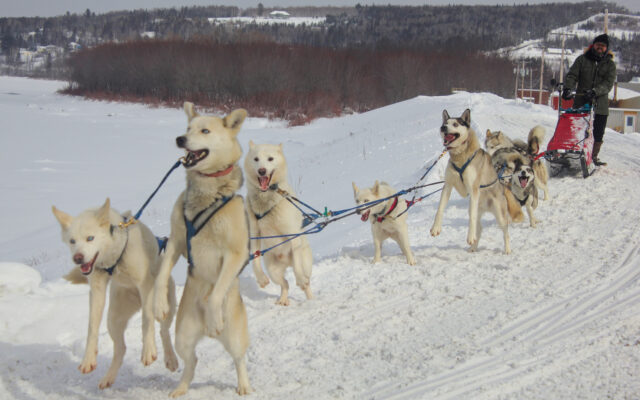 FORT KENT — The howling of dogs eager to run echoed in downtown Fort Kent Saturday, Feb. 21 and was reminiscent of the Can-Am Crown International Sled Dog Races held on Main Street each year.

But with the 2021 Can-Am event canceled due to COVID-19, the baying came from a lone team of eight Seppala Siberian sled dogs ready to embark on a weeklong journey in honor of a heroic canine ancestor.

Saint David musher Jonathan Nathaniel Hayes and his team of Seppala descendants departed from behind the America’s First Mile Monument in Fort Kent at noon on a 261-mile solo expedition meant to draw attention to the famed sled dog Togo.

Togo led his master, Leonhard Seppala, and the rest of the Seppala dogsled team 261 miles through harsh weather to transport lifesaving antitoxin to the people of Nome, Alaska, during a 1925 diphtheria epidemic.

Hayes, 45, is owner of Poland Spring Seppala Kennels in honor of Togo and Seppala, who had founded a kennel in Poland Spring where Togo retired after the historic Nome run.

This expedition is part of a coordinated effort between Poland Spring Seppala Kennels and Poland Spring Preservation Society to raise funds to commission a statue of Togo to be erected at the Maine state building in Poland Spring.

Hayes’ wife Tammie Hayes watched somewhat nervously Saturday as her husband awaited a succession of snowmobilers to pass him and his team on the narrow levee trail overlooking the St. John River.

“That worries me,” she said.

Having to share the trails with snowmobilers who are not expecting to encounter dog teams is among the dangers Hayes will face during the expedition, as the levee trail connects to the snowmobilers’ Interconnected Trail System.

The route of the weeklong run will extend due west to the town of Allagash, and then south, through the North Maine Wilderness, finishing some five to six days later at the southern end of Moosehead Lake in Greenville.

“For me, the greatest challenge of this expedition has been the logistics. Pulling the ice hook and mushing through the wilderness will be the easy part,” Hayes said. “I compare it to putting on a 261-mile dog sled race in which I am the race organizer, trail committee, veterinarian and contestants all wrapped up in one.”

Poland Spring Resort owner Cyndi Robbins is a supporter of the statue project and traveled to Fort Kent to watch the Hayes team depart on the fundraising expedition.

Can-Am President Dennis Cyr was among the well-wishers who saw the Hayes team off Saturday. Cyr, a former musher, helped harness the dogs.

Cyr added his appreciation that Hayes’ efforts will help promote the sport of dog sled racing.

Hayes said that in addition to raising funds for Togo’s statue, he hopes to draw attention to the Seppala Siberian sled dog.

“They are winter hardy, a great mix of speed and strength and their natural drive to pull sled displays their 6,000 years of selective breeding for the purpose by the native Chukchi of Siberia,” Hayes said.

Hayes has long been a fan of Seppala and Togo and even wrote a children’s book about Togo, “The True Tails of Togo the Sled Dog!”.

“After spending a quarter century absorbing every stitch of information I could find out about them both, I feel like they are friends of mine,” Hayes said.