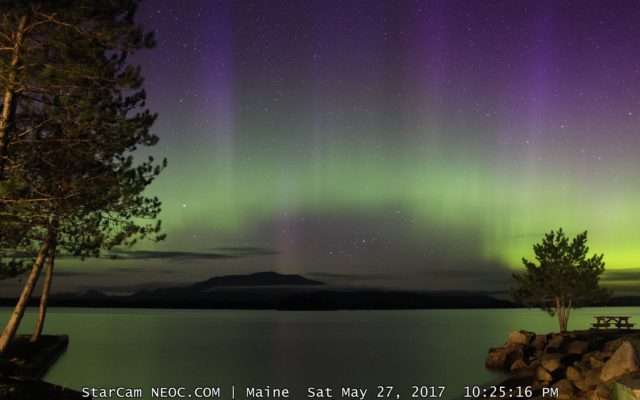 You can view Katahdin anytime you want thanks to these webcams

Contributed • February 17, 2021
By Aislinn Sarnacki, Bangor Daily News Staff Would you like to know what Katahdin, Maine’s tallest mountain, looks like this very second? You can. It’s just one click away.

On the shore of Millinocket Lake, a camera broadcasts live footage of the mighty mountain on the New England Outdoor Center website. The site also provides a timelapse of the view from yesterday and the past two weeks, so you can watch the mountain as the weather changes, the sun rises and sets and clouds move across the sky.

Or perhaps you’re more interested in the Katahdin area’s starry night sky, which sometimes displays the dancing colors of the northern lights. No problem. There’s a separate “StarCam” for that.

New England Outdoor Center also linked the cameras with a weather station on their Millinocket Lake property, Twin Pines, so the livestreams display the air temperature, wind direction and speed.

“I think there are a lot of people who use them to stay in touch with the weather on a day to day basis,” said Matthew Polstein, owner and operator of the New England Outdoor Center. “I gotta tell you, if they go offline, I immediately start getting emails and phone calls with people telling me, ‘I need my fix of Mount Katahdin today.’”

Fortunately, the facility was able to recently upgrade to a more reliable internet platform.

The webcam system is the work of Michael McCormack, a retired electrical engineer from Derry, New Hampshire. With strong ties to Maine, McCormack has set up dozens of webcam systems throughout Maine and beyond, starting in 1998 on the shores of Maine’s Sebec Lake.

“We vacationed there every summer when I was a kid through the 60s and 70s,” McCormack said. “Now I live in New Hampshire, and we still go to Sebec Lake every summer.”

McCormack’s mother grew up in the Sebec Lake area, and his family has owned a camp since the 1920s. When he decided to set up that first webcam on the lake’s shore, he was still working as an engineer at a large company, so he traveled often, working at different places throughout the country. He wanted to be able to see Sebec Lake, one of his favorite places, even when he was thousands of miles away.

“I was involved in computers and programming and image processing, so I knew it could be done, but at the time, there weren’t a lot of webcams around,” he said.

McCormack found the software to run a webcam, but it didn’t have some key features he was looking for, so he developed his own, starting from scratch and wrestling with the limitations of dial-up internet.

“One time back in 1998, I remember I was in New Orleans on a project and I was watching the lake (Sebec Lake) and thought, this is just absolutely amazing,” he said. “I could see it was a beautiful day and there was still some ice out there and puffy clouds.”

The software he created, IPTimelapse, can take snapshots, do live YouTube streaming and make timelapse videos for whatever timeframe you wish, whether that’s days or months.

McCormack currently has 28 livestreams on his YouTube channel, Boston and Maine Live. They include the Katahdin webcam at the New England Outdoor Center and webcams that showcase several other Maine locations such as Moosehead Lake, downtown Dover-Foxcroft, a view of Bar Island from Bar Harbor and Nubble Lighthouse in York.

But he has set up far more cameras than that — at least 100, he reckons. Through their business, SebecTec LLC, he and his wife, Janet, have installed cameras throughout New England, and they have projects ongoing in Iceland and Norway, where they’ve delivered camera systems for livestreaming the northern lights — also known as aurora borealis — for the Live Aurora Network and Aurora Live. Last September, they delivered cameras to the University of Dakota for project Aurorasaurus, a citizen science project funded by NASA and the National Science Foundation to gather real-time data about aurora sightings.

“I’ve always liked the weather and astronomy,” McCormack said. “And watching the clouds move in the timelapse is kind of interesting.”

The New England Outdoor Center was one of McCormack’s early clients. He reached out to Polstein in 2010 to propose setting up a camera system at the center’s Twin Pines location because he knew that it provided an excellent view of Katahdin. Polstein agreed right away, and since then, they’ve upgraded to have one live Katahdin streaming video camera and a second camera that has long exposure at night for watching the stars and the northern lights.

“Our motivation was to give people who weren’t in the area a chance to see what’s going on in our complex, but we also wanted a camera that would show Katahdin because it’s such an iconic and beautiful mountain,” Polstein said.

The camera software business has slowed down a bit for McCormack during the COVID-19 pandemic, so he took the time this past summer to build about a dozen high-end camera systems while staying at his camp on Sebec Lake. One, set up on the shores of the lake, broadcasts the night sky every night on his YouTube channel.

“You can watch satellites and meteor showers, watch them stream across the livestream,” he said. “You don’t have to sit outside in the cold or get eaten by mosquitoes. I call it the Maine Night Sky Star Party, and it’s every night, when it’s clear.”

The YouTube broadcast even has background music, and a chat function where viewers can interact.

Another popular livestream on the channel is of the ice skating rink at Strawbery Banke Museum in Portsmouth, New Hampshire. The camera was set up during the pandemic and has since become a big hit. People in the chat have expressed how watching people ice skate is both therapeutic and helps them feel connected during a time of such isolation.

The channel also includes livestreams showing Boston Harbor, the Chester Railway Station in Boston and a birdfeeder in New Hampshire. And the list is ever changing, he said. As internet connections and cell phone service continues to improve throughout New England, he hopes to set up livestreaming webcams in even more remote locations, allowing people to virtually visit places whenever they wish.