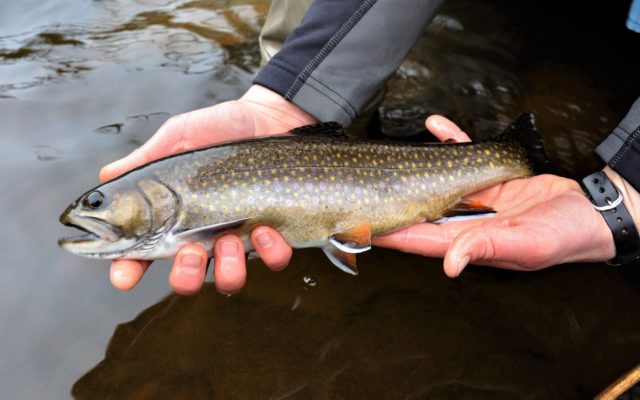 We don’t know nearly enough about sea-run brook trout as they are one of the least-studied fish in Maine. In some cases, it’s like they don’t even exist, and it’s clear they are not a priority to some of the agencies tasked with protecting them.

Outside of a few streams in Massachusetts, salters have been all but extirpated from New York, Connecticut, Rhode Island and New Hampshire. But they persist in Maine, home to 90 percent or more of the salters found in America today, as much by accident as design.

Once thought to be a subspecies of brook trout, while salters demonstrate a unique life history strategy, they are genetically the same as other brook trout. Their pale coloration is temporary, and once they move into freshwater, they look like any other brook trout.

It’s likely that what makes a brook trout sea-run is a combination of opportunity and personality. No unique genetic marker has been found, and not all fish from a given stream with access to the ocean seem to take advantage of it.

Some sea-run brook trout winter in saltwater where they feed on abundant minnows and crustaceans. One study found that brook trout that wintered in saltwater grew 30 percent faster than those that remained inland. Salters are also stronger than inland brook trout.

Coastal streams end in saltwater, rather than merging with freshwater. Some empty into salt marshes, others estuaries and some open ocean. One stream I know of goes intermittent before reaching the ocean in all but the highest tides. In addition to the flora and fauna found in freshwater, they host anadromous and catadromous fish only found where travel between freshwater and saltwater is possible.

Brook trout in inland waters fall under the jurisdiction of the Department of Inland Fisheries and Wildlife. Most coastal rivers and streams are under general law regulations, which includes allowing live fish as bait, and its 30 percent incidental mortality rate, a five-fish limit, and a 6-inch minimum limit.

For years, the department has stocked nonnative brown trout in coastal rivers south of Bangor. While down to four or five stocking programs, there were once close to 50. Browns are also stocked in lakes Down East, where they can find their way into salter waters. Browns compete with brook trout for food and space, and can disrupt spawning and prey on juvenile fish. In 2014, Maine Audubon and Trout Unlimited undertook a project to identify wild brook trout populations in coastal streams. The data collected was provided to the Department of Inland Fisheries and Wildlife to help with management decisions.

Six years later, nothing has changed.

When asked if salters were included in the new Brook Trout Management Plan, the department said they weren’t. A list of salter waters I obtained from the department did not include Stanley Brook in Acadia, home to a large National Park Service kiosk denoting their presence.

Recently, Downeast Salmon Federation and Native Fish Coalition asked the department to partner on a study to determine if sea-run brook trout in a multi-stream bay environment move between streams. The department declined, stating it was a local and not a state issue. The study is taking place Down East, home to 90 percent of the state’s salters. In 2020, the department voted against a Maine Outdoor Heritage Fund grant application to help fund the project, saying it was “not a priority.”

It lists “anadromous brook trout” as a Species of Special Concern. Maine’s Wildlife Action Plan notes that research on diadromous fish is a high priority, and specifically, notes their desire to “Improve understanding of species distribution especially in regards to ecosystem interactions,” exactly what that study aims to do.

In 2016, I approached the National Park Service regarding why they were failing to provide Acadia’s salters the same level of protection afforded native trout in other national parks. They, too, are under general law rules. The park service’s response is posted on the Native Fish Coalition’s website, and included the following:

“Since 1995, the park has met with and expressed concern about fisheries management to [the DIF&W] … NPS drafted several different draft Memoranda of Agreements for consideration by the agencies to articulate a plan for mutual management of fisheries and other resources in the mid-coast area of Maine … a constructive management framework remains to be agreed to and put into operation.”

Salter streams are found at low elevations, and are at risk of warming due to climate change. Coastal real estate is also coveted by developers. And our coastal waters haven’t escaped the nonnative fish plague. Highly invasive bass are now found in many coastal waters, including Down East. Having seen what bass did to the Kennebec and Rapid rivers, the prognosis is not good.

There is, however, hope, with groups like Downeast Salmon Federation and Native Fish Coalition working to preserve and restore salter habitat, support population studies, lobby for protective regulations, and educate the public about salters and the threats they face. Now we need the agencies responsible for preserving these fish to follow suit and do everything they can to protect Maine’s unique sea-run brook trout.