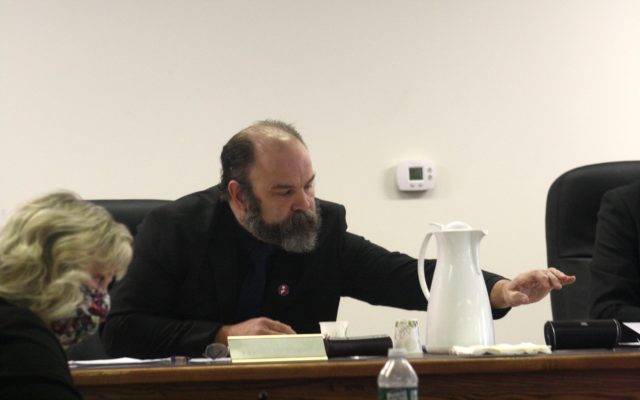 DOVER-FOXCROFT — Piscataquis County’s three commissioners all signed their names to a resolution Tuesday that objects to Gov. Janet Mills’ COVID-19 prevention measures, contains misinformation about mask-wearing and repeatedly refers to the coronavirus as the “Wuhan Virus.”

About a dozen people attended the in-person commissioners meeting next to the Piscataquis County Superior Court. More than 100 people signed in using Zoom, nearly all of whom opposed the resolution.

It was the first of the commissioners’ meetings to be broadcast digitally since the start of the COVID-19 pandemic last year.

Chair James White, however, abruptly halted the Zoom call as a woman objected to the resolution and demanded more people in the Zoom meeting be able to voice their opposition. He pushed a button on a speaker that stopped the remote participants’ voices from being broadcast into the meeting room.

The Zoom attendees were not able to hear the commissioners after that moment, though the more than 100 people who had signed on continued to talk among themselves about their opposition to the resolution. Several said the commissioners should resign for their actions, and others suggested that the group explore how to remove them from office.

The resolution — which does not have a binding effect on county policy — calls for Mills to halt “mandates and the lock-down” to stop the harm the commissioners said they have done to Maine’s economy and population. The resolution contains numerous false statements — including, for example, that face coverings cause pneumonia and respiratory disease — and sparked negative reactions from residents on Piscataquis County’s Facebook page when the commissioners posted its text last week.

White said it had been stated in the rules for the Zoom meeting that people who attended remotely were not able to participate in the public comment portion of the meeting. He appeared to be motioning for a vote without hearing the Zoom attendees before Lesley Fernow of Dover-Foxcroft demanded to be able to speak.

Fernow, who has long worked as a physician in the area, objected to the resolution’s false statements and pointed to Piscataquis County’s high rates of obesity, chronic lung disease and other conditions that put them at greater risk for complications from COVID-19.

“Now is not the time to let up on proven public health measures,” Fernow said.

The meeting came after the county commissioners likely violated Maine’s rules on open government in developing and adopting the resolution. The three commissioners — White, Andrew Torbett and Wayne Erkkinen — developed the measure outside of public view, using emails and phone calls, and adopted it in secret rather than at a public meeting.

One woman who attended the meeting in person said that she had only come after she realized that she wouldn’t be able to speak on the Zoom call.

White argued with those who opposed the resolution. At one point, he laughed when someone referred to the resolution’s use of the phrase “Wuhan Virus” as racist.

Torbett, who said he wrote the resolution, was more diplomatic, saying the point was not to create controversy, but to protest what he saw as a lack of representation of Piscataquis County residents’ concerns in the development of Mills’ COVID-19 orders.

The number of resolution supporters and opponents who attended the meeting in person and delivered public comments was about even. Two Piscataquis County sheriff’s deputies were present.

None of the commissioners wore face coverings, nor did several residents who attended.