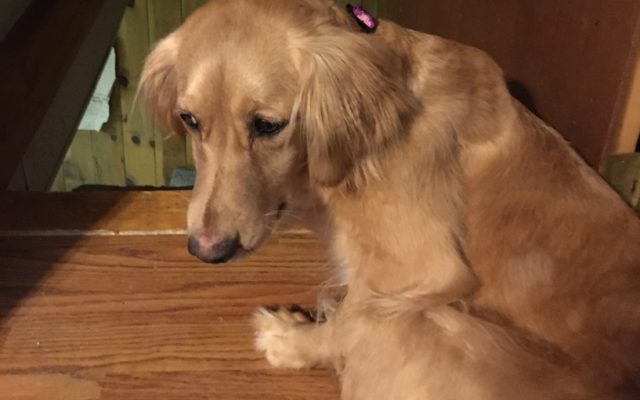 Contributed • November 27, 2020
By Julia Bayly, Bangor Daily News Staff Honey Bear is a survivor. Only a few years old, the golden retriever mix made it for 10 months and about 100 miles on her own after bolting from her owner in Monson.

Honey Bear is a survivor. Only a few years old, the golden retriever mix made it for 10 months and about 100 miles on her own after bolting from her owner in Monson. And now, she’s heading home for Thanksgiving.

Where Honey Bear has been and how she managed to get all the way to Baxter State Park, though, is a mystery.

Honey Bear had only just settled into her forever home when she went missing. The shy and nervous rescue dog with a rough start had only just begun to trust her owner when she took off one day while being walked on a leash.

“I only had her for two weeks before she took off,” Kelley said. “When I first had her all she would do was curl up in a corner and one day all she did for five hours was sit in the bathroom with her head down.”

Patience, love and a little time had helped the 2-year-old dog begin to trust — and leash walk. But she was still nervous.

“She was doing so well,” Kelley said. “But one day we were out on a walk and she got spooked and jerked the leash right out of my hand and took off.”

Kelley did everything she could to get Honey Bear to come home — and she did, sort of.

For the next two weeks Honey Bear was spotted all over Monson where residents rallied to try and catch the dog. Kelley said she set up a large live trap in her garage with food and one of her old coats in it hoping that would lure Honey Bear home.

“She’d come to the trap but would just drag my coat out,” Kelley said. “She would drag that jacket out of the garage and lay on it and sleep on the snow.”

After a couple more weeks, Kelley said the sights around town stopped. Until a week later when she was spotted nine miles south in Guilford. Honey Bear remained in that town for a day or so and was not seen again until mid February when she was sighted in Blanchard.

“That’s where all reports of her stopped,” Kelley said.

And that’s where the mystery begins. Where did Honey Bear go? And how did she end up in Patton?

Kelley turned to the volunteer organization Maine Lost Dog Recovery, which put flyers up and posted information about the missing dog on social media. Kelley just hoped someone, somewhere would find the dog.

Three months later, in May, a golden retriever looking dog was hanging around the Matagamon Wilderness Campground. Joe and Sue Christianson and their extended family spotted her.

They didn’t know the dog was the missing Honey Bear. And despite their efforts, they couldn’t capture the dog either, according to Kathy Winslow, a volunteer with Maine Lost Dog Recovery. The dog would come and go around the campground, but never get close enough to grab or trap. Maine Game Wardens were contacted and asked to see if they could get the dog, but they had no luck either.

Then, last week, another volunteer called Winslow. He had seen a social media post about the dog hanging around the campground and thought it looked a lot like Honey Bear. That’s when Maine Lost Dog Recovery got involved again.

“I took one of our special, large traps up with a ton of treats, dog food and hot dogs,” Winslow said. “I showed them how to set it up and we just hoped for the best.”

The trap was set over the weekend. On Monday, about 10 months after going missing, Honey Bear was finally captured.

The identity of the dog was confirmed when Winslow sent pictures to Kelley. She was also still wearing her collar. She had lost the leash at some point in her 100 mile journey from Monson to Patten near Baxter State Park.

“I am still in shock,” Kelley said. “I adored that dog — she was the sweetest, shyest thing and I was heartbroken when she ran off.”

Kelley said she will drive to Patten on Thanksgiving Day to pick up Honey Bear and can’t wait to begin spoiling her and introducing her to her new little sister, a rescue German Shepherd mix named Keegan.

“From what they are telling me, it looks like she is more open to being around people now,” Kelley said. “Maybe being away from humans for so long showed her people are not always as horrible as she thought.”

Although Honey Bear can’t share her adventure tale, Kelley and Winslow suspect the dog used snowmobile trails, park roads and parts of the Appalachian Trail to get around. There are still questions about where she found shelter and how she fed herself, but those may never be answered.

Dogs are remarkably tough and resilient, Winslow said, and she is not at all surprised one could survive 10 months — or even more — on its own.

“I love it when we can finally find a lost dog,” Window said. “This made my Thanksgiving knowing Honey Bear is finally going home.”