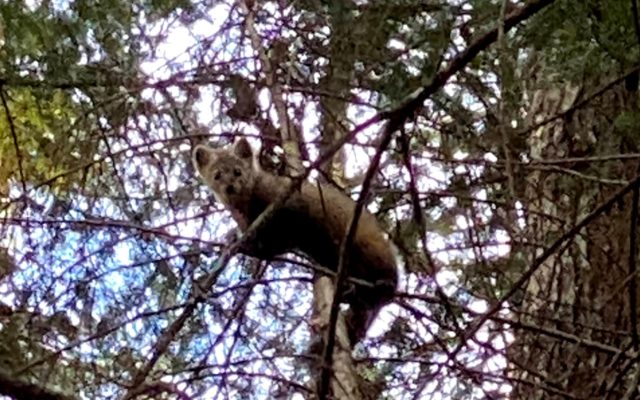 Contributed • November 26, 2020
By John Holyoke, Bangor Daily News Outdoors Editor Over the past few weeks, Judy Camuso, commissioner of the Maine Department of Inland Fisheries and Wildlife, has been spending as much time as possible in the woods, deer hunting. That effort paid off on Nov.

Over the past few weeks, Judy Camuso, commissioner of the Maine Department of Inland Fisheries and Wildlife, has been spending as much time as possible in the woods, deer hunting.

That effort paid off on Nov. 21, even though no deer showed up. Instead, Camuso had a once-in-a-lifetime encounter with one of Maine’s most elusive wild animals: a pine marten.

Camuso was deer hunting near Greenville when she caught the attention of a red squirrel, which chattered at her and voiced its displeasure at her arrival in its home territory. Not long after that, another unexpected animal showed up.

“I was sitting there and I heard something pretty loud behind me and I thought it was still the red squirrel. I try not to move very quickly when I’m deer hunting because I don’t want to startle anything,” Camuso said. “I turned very slowly and I looked, and I was like, ‘That’s not a red squirrel. It’s a pine marten!'”

Camuso, who began work at the DIF&W as a wildlife biologist, has spent a lot of time in the woods over the years. But seeing a pine marten is an exceedingly rare occurrence, she said.

“I’ve really only seen pine martens flashing by, a passing glance twice in my life. So fast that I didn’t know what they were until they were gone, and I said, ‘Oh. That was a pine marten,'” she said.

The marten wasn’t scared of Camuso, but was very curious, and seemed to be trying to figure out exactly what kind of forest-invader it had come across.

“It approached, and then it saw me there and ran up the tree and was sort of chattering there at me,” Camuso said. “At first I very slowly turned and looked, and the little marten was looking at me like I was some kind of alien being. Like he’d never seen anything like this.”

Camuso said that the marten didn’t just check her out and move on. Instead, it stayed in the area — often in trees 10 or 15 feet away — for about a half hour.

“Eventually, I sat up and got my cell phone out. I thought, ‘He’s not terribly shy,’ and I started taking pictures of him,” Camuso said. “I’ve long forgotten that I’m supposed to be deer hunting, and I’m squawking at him. He comes down on the ground and he comes up close.”

Camuso said she began texting photos of the marten to her friends. Even for a veteran biologist, the experience was special.

“This was like the absolute ultimate experience I could possibly have had. People are like, ‘Did you see any deer?’ I’m like, ‘What? No. I didn’t see any deer.’ But it was incredible,” she said.

Camuso said that due to the pandemic, her regular schedule speaking engagements and public appearances — a normal responsibility of the commissioner — have been canceled. She has sought solace in wild places, and has found that the simple act of deer hunting has been therapeutic.

She said that for her entire life, she’s been a list-maker, and a counter. When she’s birding, she’s counting species, or numbers of birds, or working off her mental list of what kinds of birds she should be seeing. Deer hunting has been different.

“When I’m deer hunting and I get set up in a place, I just sit there. It’s so restorative. It’s like nothing I’ve ever experienced,” she said. “By and large I put my phone away and I just sit there and watch the world. I let my mind relax, and I decompress.

And on this day of “deer hunting,” the deer just didn’t matter.

“For me, it’s been the highlight of my fall by far. Even if I end up harvesting a deer, I still think the marten experience is going to be the best thing that’s happened to me — a wildlife experience — in a couple of years,” she said.