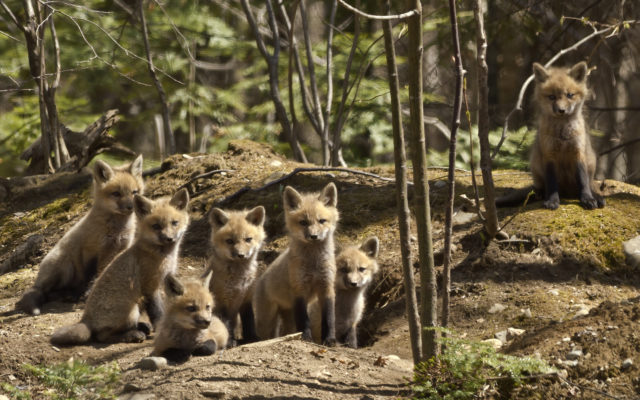 Contributed • November 23, 2020
By Sandy Heal I love all wildlife. But everyone has their favorite, right? Well, I’m no exception.

I love all wildlife. But everyone has their favorite, right? Well, I’m no exception. My favorite four-legged wild animal is the beautiful, elusive red fox.

In general, foxes are not especially dangerous. They present no danger to humans unless they are rabid, which is rare, or if they are being captured or handled. Contrary to what many people believe, they do not normally attack dogs or cats because they are not something that a fox sees as prey. When I’m with fox kits, though, I always watch for the presence of the parents.

Over the years, I have been fortunate to come across a few fox dens here in Piscataquis County within 30 miles of my Sebec home. Some years, no matter how hard I search, I find none at all. When I do find one though, I’m in seventh heaven.

When the fox kits (also called pups, because they are of the canine family) first come out of their den, they are so cute. Their little eyes are so full of wonder and curiosity that they make my heart melt.

Not too many years ago, I was lucky enough to find a den of kits who had just emerged from their den. Not wanting to frighten them, I stood very still behind a small tree and simply watched for a few minutes. They were so cute. My heart was pounding with excitement. I slowly moved out from behind the tree so they could see me. They scurried back down into their den before I could take any photos of them. So I waited — and one by one they came back out, and I started taking photos. I had a big smile on my face the whole time.

Mom and dad fox both go out hunting for food for the kits. The bigger the litter, the more they have to hunt. They will feed on livestock that is small such as poultry, rabbits or other small newborn animals. Their diet can be as flexible as their home habitat. Foxes will eat fruit and vegetables, fish, frogs and even worms. If living among humans, foxes will opportunistically dine on garbage and pet food.

One other time I found a den and could see signs of a lot of activity. I sat in my car and watched and waited and waited and waited. Finally, one little kit appeared. “Oh boy,” I thought, “Now things are starting to happen.” A moment later, a second kit appeared, then another and another. Four kits. Oh boy, I was really getting excited now. Then a fifth one appeared. Then a SIXTH. Wow. I had never seen that many. By then my heart was pounding and my hands were shaking so badly I just knew my shots would come out blurry.

Suddenly a SEVENTH kit came up from behind the den. I almost fainted from excitement. As I watched and took photos, they all looked at me except one. (Yes, there’s one in every crowd.) That shot of the seven kits is one of my most prized photos. Patience is the key to wildlife photography for sure.

More recently, I learned about a family of at least six kits. I went up to see if I could see any of them and take photos. One came down the road to greet me. That sure surprised me. We hung out together for a little while when he did something I never would have expected. He stood up and put his front feet on the back of my car. All I could think of (other than getting that shot) was if he was thinking: “When I say go, give it the gas!”

That was my favorite shot for the day. I wonder if he was looking at the raindrops on my tail light lens or if he could smell a mouse in my trunk. (I had seen signs of one in there.)

Later I ventured on over there again and was lucky to have three of the foxes come around. I got a lot of nice photos of them. They are so beautiful now with their winter fur and bushy tails. Such beauty. I could never shoot any of them except with my camera, and I could do that all day long.

Remember that den where I got photos of the seven kits? Well, I go back there on occasion to see if there is any activity. I did luck out on a beautiful spring day before the snow left. I could see that the snow was packed down around the entrance to the den, so I sat and waited. After half an hour or so, a beautiful fox came out. There he stood in all his glory. I finally got the shot of my dreams: a fox in the snow. A few days later, he moved on and I never found him again.

I will continue to watch for and photograph foxes and other wildlife throughout the winter. I hear that snowy owls are one their way south, too, so perhaps I’ll get lucky and find one.

Heal is from Sebec.

This story is a part of an ongoing series in which photographers share their favorite stories about photographing Maine wildlife. Stories and photos can be submitted to Act Out editor Aislinn Sarnacki at asarnacki@bangordailynews.com. In the email, include your full name and town of residence, as well as the written story and photos you wish to be considered for publication.