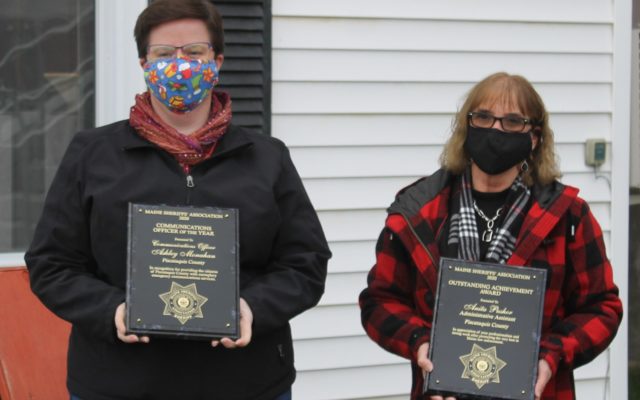 “Every spring the Maine Sheriff’s Association has an awards banquet and conference and they recognize the good of employees across the state,” Young said during a Nov. 17 county commissioners meeting. He explained the 2020 event was canceled as a result of the pandemic and the sheriff’s office had to do likewise with its gathering planned for next month.

Reading Monahan’s nomination information, which was written by Chief Deputy Todd Lyford, Young said, “Ashley has been providing the citizens and public safety personnel of Piscataquis County with exemplary emergency communication services for more than five years. Always prepared with critical information for responders, Ashley conveys the message clearly and efficiently every time. With the sizable amount of information to disseminate, she manages each situation with a calm demeanor, even in the most stressful situations.

“Ashley has extensive working knowledge of all our computer systems and programs. With social media and technology playing a considerable role in how we relay information to the public, she supports the sheriff in getting that message out as quickly and plainly as possible. As a night shift communications officer, Ashley requires minimal supervision and direction. She represents the kind of team member every department wants and deserves.”

Pushor said she is in her 25th year with the sheriff’s office.

Young wrote her nomination and reading his words said, “Most agencies have that person who functions as an orchestra conductor; keeping folks going the right direction with their finger on the pulse of all that’s taking place.  For Piscataquis SO, Anita is that person. Officially, she keeps the bills paid and budget in the black, manages civil service, greets the public coming in, answers much of the correspondence and keeps the lawyers happy. Unofficially, she organizes our Christmas banquet, annual community barbecue, provides Christmas gifts for SO employee kids, and reminds the sheriff when he’s forgotten something (like a meeting).

“That’s a partial list. In addition, she knows stuff, like why we do what we do and why we started doing it. She volunteers for many of the uncategorized duties that don’t fit anyone in particular but must surely be done. She’s in the office early, often the last one to leave and works through lunch, all to keep the gears flowing smoothly at [the sheriff’s office].”

Monahan, whose parents were present, and Pushor were each presented with plaques from Young.