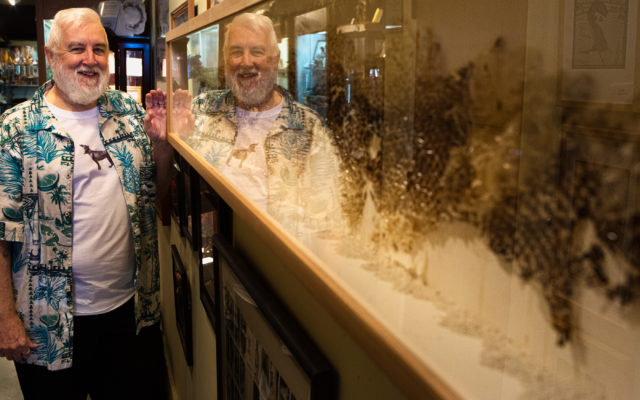 Contributed • October 29, 2020
By Emily Burnham, Bangor Daily News Staff Loren Coleman has spent most of his career chasing down both fact and fiction when it comes to the strange, unidentified creatures that may or may not wander the world. As the founder and curator of the International Cryptozoology Museum in Portland, he has amassed an amazing collection of ephemera related to everything from Bigfoot and the Yeti to the chupacabra and the Jersey Devil.

Loren Coleman has spent most of his career chasing down both fact and fiction when it comes to the strange, unidentified creatures that may or may not wander the world. As the founder and curator of the International Cryptozoology Museum in Portland, he has amassed an amazing collection of ephemera related to everything from Bigfoot and the Yeti to the chupacabra and the Jersey Devil.

More specifically, he’s also done extensive research on the cryptids — the term for an animal that is claimed but not proven to exist — that may wander the woods and waters of Maine. Below are five of the most famous ones to have popped up throughout history — from the very possibly true, to the colorful and probably fantastic.

Wessie, the giant snake of Westbrook

In June 2016, a resident of Westbrook spotted what he believed was a 10-foot-long snake with a head “the size of a softball” slithering away from a playground. A few days later, a Westbrook police officer also saw a giant snake. By then, the creature already had a name: Wessie, the giant snake of Westbrook.

Wessie wasn’t the first huge snake to be spotted in Maine. According to Coleman, there are reports of huge snakes seen in the towns of Winthrop and Gardiner in the late 19th century, and further giant snakes have been seen in Pennsylvania, Maryland and Ohio.

Little was seen of Wessie for the rest of that month or the following month, but in August 2016, a long shedded snake skin was found in Westbrook. It was determined to be from a Burmese python, possibly escaped from its owner. The snake skin ended up in the hands of Coleman, who now has it on display at the museum.

Sailors have spotted sea monsters since time immemorial, be they kraken, hydras, monstrous fish or even dragons. The vast majority of the time, they’ve actually spotted sharks, whales or squid — but sometimes, it’s hard to explain exactly what a seafarer might have seen while out on the open ocean.

Such was the case with Ole Mikkelsen, a fisherman in Portland who in 1958 spotted a creature he estimated to be over 100 feet long off the coast of Cape Elizabeth. Mikkelsen related the story to Coleman back in 1985, saying the creature had a mackerel-like tail and was the color of a cusk, a cod-like fish. That sighting, along with others from the 19th century, is among the many tales of Cassie, the Casco Bay sea monster, a name for the unidentified creature.

For as long as people have hunted moose in the Maine woods, there have been sightings of the specter moose — an enormous, ghostly white moose that stalks the hidden corners of the state. Generally, it’s been spotted somewhere between Katahdin and Moosehead Lake, and no one seems to be sure if they saw an albino moose, or something a bit more ghostly. Either way, sightings of white moose are also common in other heavily forested parts of North America, including Ontario and upstate New York.

Everyone is familiar with Bigfoot, or Sasquatch, the giant ape-man that some believe can be found deep in the forests of the Pacific Northwest. In the Northeast, the Wabanaki people have somewhat similar stories of Kiwakwa, a gigantic humanoid that reportedly has a taste for human flesh, especially during the winter. Some stories say that Kiwakwa is a human under a curse. Other stories say it is an actual monster. It is not entirely dissimilar to the Wendigo, another being described by Algonquin-speaking people that is also cannibalistic and seen most often in the winter.

Though Maine’s Department of Inland Fisheries and Wildlife maintains that mountain lions (also knowns as cougars, pumas or panthers), are not presently in Maine, some Mainers are convinced that they’re not only here, but that there’s also a sub-population of black, or melanistic, big cats roaming the woods. All cougars from the Yukon to Patagonia are part of the same overall species (Puma concolor), and scientists believe that they don’t have the genetic capability to develop melanism, in which its fur is entirely black. Only the jaguar, a separate species from South America, can display melanism. Nevertheless, black panther sightings in Maine have persisted for decades. And with many thousands of acres of Maine’s woods remaining completely uninhabited by humans — who knows what might be out there?