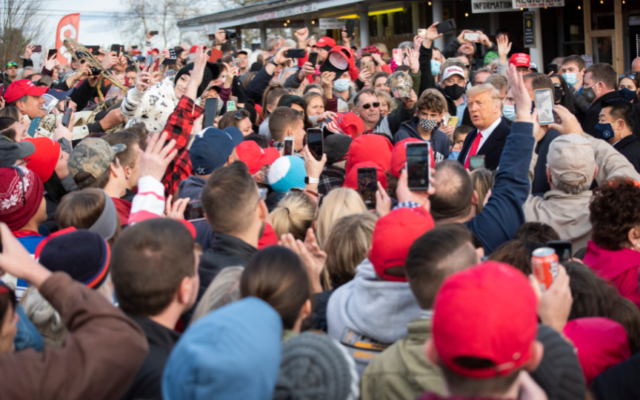 Contributed • October 26, 2020
By Michael Shepherd, Bangor Daily News Staff LEVANT — President Donald Trump descended on an apple orchard Sunday in a pitch to 2nd Congressional District voters touting his June action to allow fishing in a national marine monument southeast of Cape Cod where few, if any, Maine fishermen fish. At least several hundred people — event staff said roughly 3,000 — showed up at the orchard to greet the president on a late-breaking visit to the Bangor area nine days before the Nov.

LEVANT — President Donald Trump descended on an apple orchard Sunday in a pitch to 2nd Congressional District voters touting his June action to allow fishing in a national marine monument southeast of Cape Cod where few, if any, Maine fishermen fish.

At least several hundred people — event staff said roughly 3,000 — showed up at the orchard to greet the president on a late-breaking visit to the Bangor area nine days before the Nov. 3 election. Arrangements came together in less than 24 hours, as Treworgy Family Orchards CEO Jon Kenerson said he received a call at about 8 p.m. Saturday to schedule the event.

Trump arrived at the orchard here shortly before 3:40 p.m. and remained for only about 15 minutes. He walked through a barn to sign supporters’ hats, gestured to the national media to say “they have no idea what’s happening,” then made brief remarks using a bullhorn.

The visit underscored the Republican president’s fixation on the one Electoral College vote from Maine’s 2nd Congressional District, which he won in a historic 2016 split of the state by 10 percentage points. He has been virtually tied with Democratic nominee Joe Biden this year in the district, though the former vice president is a heavy polling favorite to win the election.

Trump has aimed a policy and messaging blitz at Maine and key industries this election season. He visited five times during his 2016 campaign and made his only official visit here in June, meeting with fishing interests in Bangor and visiting a Puritan Medical Products facility in Guilford that used federal funding to increase production of swabs used to test for the coronavirus.

The same day in June, he issued an executive order opening the Northeast Canyons and Seamounts Marine National Monument, which was created by President Barack Obama in part to protect the area from commercial fishing. Trump’s move was backed by regional fishing interests, but it is well out of range for fishermen here, a point that has been lost on Trump in speeches since then.

On Sunday, he said the Obama administration took that swath of ocean “away from you.” Then, he said, “You know who it’s a monument to? Your last president.”

As for his electoral prospects in Maine, Trump said, “We got one section” in 2016. This year, “let’s get the other section.”

Earlier on Sunday, Trump spoke at a campaign rally in Manchester, New Hampshire, that had — unlike his visit to the Bangor area — been announced days earlier. While word about the president’s Maine visit trickled out late, large crowds of supporters managed to turn out both at Bangor International Airport to glimpse Air Force One and at the orchard.

Some Trump supporters found the event by surprise. Ali, a woman from Kenduskeag who refused to give her last name, came with three of her young children and two nephews to pick apples and saw the Secret Service setup and found out they were at the event by chance.

“It was pretty exciting,” she said.

The crowd was packed at the orchard, where many supporters packed in tightly without wearing masks. State coronavirus rules limit outdoor gatherings to 100 people and mandate masks or other face coverings in places where it is hard to maintain distance from others.

Supporters doubted that Biden actually holds the advantage that national and battleground-state polls are showing. Wayne Meserve, 62, of Charleston, who spoke to Trump at the front of the rope line, said he expected the president to do well in the “Trump country” of northern Maine based on the president’s share of signs and how locals are talking.

“I think this is amazing,” Mary Fosnough of Oakland said of the crowd at the airport. “I think it’s a telltale sign of who is really winning this thing.”

Three of Maine’s top Democrats — Gov. Janet Mills, Attorney General Aaron Frey, and House Speaker Sara Gideon — held a news conference ahead of Trump’s arrival in the state to blast the president’s handling of the pandemic and rally support for Biden and Gideon’s bid to unseat Republican Sen. Susan Collins.

“I’ll work to bring our country together, address our national crises, and rebuild our economy to create a better future for all,” Biden said in a Sunday statement aimed at Maine.

Kenerson, the CEO of the orchard, said he agreed to host the event after the Trump campaign said it would not be a rally for the president. Treworgy was part of a political controversy in 2012 when the family’s patriarch put up a sign opposing a same-sex marriage referendum.

Now, it does not want to wade into politics, Kenerson said, adding that Biden would be welcome to show up as well.

“If a sitting president wants to come buy some apples, we can do that,” he said.