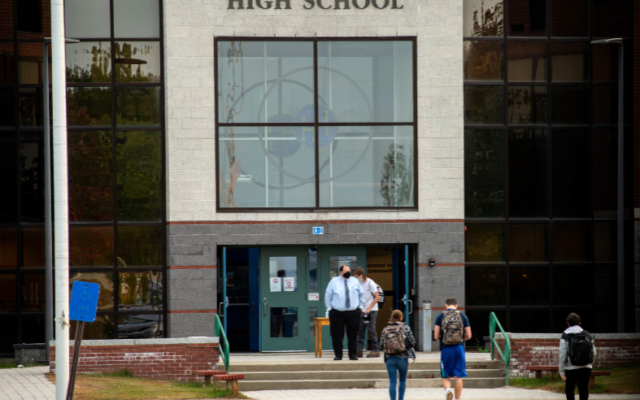 Contributed • October 26, 2020
By Eesha Pendharkar, Bangor Daily News Staff Since Maine schools reopened for the fall, students and staff have had to wear face coverings throughout the day, keep their distance from others, wash their hands frequently and often stick with the same, small group throughout the school day to reduce the risk of the coronavirus spreading. Widespread virus testing at school, however, hasn’t been part of Maine schools’ strategy to prevent the spread of the coronavirus, even as the state has seen 113 coronavirus cases and four virus outbreaks in public schools over the past month.

Since Maine schools reopened for the fall, students and staff have had to wear face coverings throughout the day, keep their distance from others, wash their hands frequently and often stick with the same, small group throughout the school day to reduce the risk of the coronavirus spreading.

Widespread virus testing at school, however, hasn’t been part of Maine schools’ strategy to prevent the spread of the coronavirus, even as the state has seen 113 coronavirus cases and four virus outbreaks in public schools over the past month.

Testing doesn’t necessarily need to be part of the strategy, according to experts.

There’s no clear answer as to whether schools should regularly test their students and teachers for the coronavirus, as colleges and universities in Maine and across the country are doing. The nation’s top public health agency acknowledges that schools could benefit from surveillance testing — especially in areas where the virus is circulating widely and access to testing is limited — but it stops short of recommending it. To the extent there is an answer, it comes down to the resources schools have, the ages of the children they serve and how actively COVID-19 is spreading in their communities.

In Maine, there’s generally a high level of access to testing outside of schools, and the virus is spreading less in Maine than in virtually every other state.

Maine is one of eight states that researchers say are conducting enough tests to stem the virus’ spread, and anyone in Maine over a year old is eligible for a test. And, as of Saturday, Maine had recorded the lowest test positivity rate in the nation over the past week, a sign of a low level of virus transmission even as Waldo County contends with a church-linked outbreak that has forced some schools to  pare back in-person instruction and call off the rest of the high school sports season. An average of 0.6 percent of Maine tests had come back positive over the past week compared with the national rate of 5.8 percent, according to the Johns Hopkins Coronavirus Resource Center.

The availability of testing locally is the main reason the Bangor School Department does not see the need to offer testing, said Assistant Superintendent Kathy Harris-Smedberg.

“I don’t know that having testing at the school would provide a benefit beyond going to” the local drive-through testing site near Bangor International Airport, she said.

Maine Center for Disease Control and Prevention Director Nirav Shah pointed to the variety of other actions the state’s public schools have taken that reduce the need for widespread testing on the level that colleges and universities have undertaken at significant expense.

“There are significant differences between colleges and schools, namely, the controls that have been placed within schools to keep students as well as teachers in tight pods as well as significant investments in things like engineering controls to reduce the likelihood of transmission,” Shah said.

Most Maine schools have stayed open throughout the nearly two months students have been back for in-person learning, with a handful shutting down temporarily in response to outbreaks and individual virus cases. Across the country, schools don’t appear to have become the major sources of COVID-19 transmission that many had feared. Elementary schools especially have seen relatively few infections.

But virus conditions can change quickly.

“My worry is that just because things have been so calm and quiet in Maine so far doesn’t mean they’re going to stay that way,” said Matthew Fox, a professor of epidemiology and global health at Boston University. “And the key to really being on top of things and being able to identify where outbreaks are happening and what to do about it is testing. I do think schools are a good place to be identifying where contact is happening, and therefore it is a reasonable place to be doing testing.”

Perhaps the main limitation for public schools is the cost of carrying out that surveillance testing.

The University of Maine System, with 30,000 students at seven universities, is spending $6 million on its testing program, through which it’s tested all students living in dorms and tests 2,000 randomly selected students and employees every 10 days throughout the semester. Maine’s public schools, by contrast, have more than 180,000 students spread across nearly 600 schools.

“Relative to something like wearing masks, which is relatively cheap, testing is expensive,” said economist Emily Oster, who co founded the COVID-19 School Response Dashboard, which tracks case data at K-12 schools across the country. “It’s about thinking about what else you’re not going to do if you spend money on testing.”

For example, if a district has to choose between improving ventilation in school buildings — improved flow of clean air can dilute potential contaminants — or testing students and staff, it might favor ventilation upgrades.

If districts do decide to conduct widespread testing, they might choose to target the testing at older students, Oster and Fox said.

“We have pretty good evidence that younger kids are kind of, on average, a bit less likely to transmit [the virus] and that high school kids are probably not much different than adults,” Oster said. “Because we know that high schools have on average more cases than younger kids’ schools, they should probably focus testing on [high schools] if schools are resource-constrained.”

As much of the nation sees another spike in COVID-19 cases, schools can use this semester to evaluate what works best to keep schools open. Ideally, data collected from testing students and staff multiple times a week would be a strong indicator of how widely the virus is transmitting in the broader community and would help schools make decisions for the next semester, Fox said.

“In general, it would be great for schools to be able to learn from other schools and sort of see what works,” Oster said. “For places like Maine that have fairly low prevalence, if you’re worried what’s going to happen if your positivity rate goes up to 5 percent, for example, you have a lot of places you can look at.”