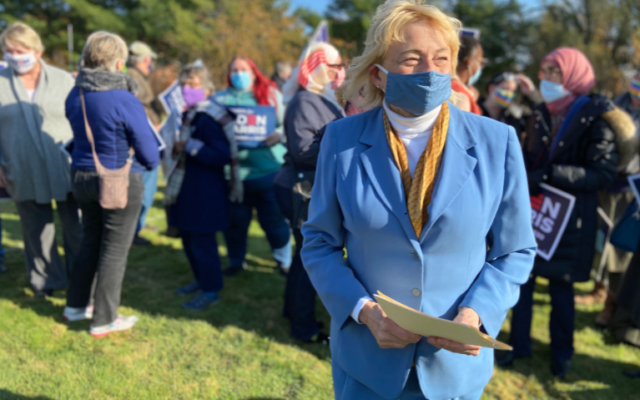 Contributed • October 26, 2020
By Eesha Pendharkar, Bangor Daily News Staff Three of Maine’s top Democrats greeted President Donald Trump with sharp criticism for his last-minute visit to the Bangor area on Sunday, with Gov. Janet Mills saying the president “doesn’t care about” everyday Maine people and chiding him for only showing up in Maine during election years.

Three of Maine’s top Democrats greeted President Donald Trump with sharp criticism for his last-minute visit to the Bangor area on Sunday, with Gov. Janet Mills saying the president “doesn’t care about” everyday Maine people and chiding him for only showing up in Maine during election years.

Mills, House Speaker Sara Gideon and Attorney General Aaron Frey also called out Trump’s response to the pandemic and his failure to disavow white supremacists during the first presidential debate at a news conference they scheduled around the corner from Bangor International Airport less than an hour before the president’s scheduled 2:30 p.m. landing.

While Gideon has been in the midst of one of the nation’s highest-profile Senate races as she tried to unseat Republican Sen. Susan Collins, Mills and Frey haven’t been a common presence on the campaign trail this year.

“When Donald Trump was elected president I said I’ll give him the benefit of a doubt,” Mills said. “But I am not now, and no one should.”

Trump’s visit to Maine 10 days before the election is part of a late addition to his campaign schedule. It highlights the emphasis his campaign has placed on winning the electoral vote from Maine’s 2nd Congressional District, which he won in 2016. While Democrat Joe Biden is currently leading in statewide polls, the contest is much narrower in the 2nd District.

He also visited Bangor in June, when he held a fisheries roundtable at the airport before heading up to Guilford for a tour of the Puritan Medical Products manufacturing plant.

Mills said Trump was “desperate for every electoral vote” and blasted his response to the coronavirus pandemic on the day Trump’s chief of staff said, “We’re not going to control the pandemic.”

“We’ve seen this pandemic spread in every county in the state and this president has done nothing to stop it,” Mills said. “He’s welcome to come here, but I encourage him for once to start speaking the truth.”

At the news conference, Gideon also criticized Collins for falling in line with the president.

Collins was in Washington, D.C., on Sunday as Senate Republicans — without the support of Collins or Republican Sen. Lisa Murkowski of Alaska — overcame Democrats’ opposition to advance Trump’s Supreme Court nomination of Judge Amy Coney Barrett.

Frey focused on multi-state legal action against the Trump administration that he’s signed onto with other attorneys general, including an effort opposing a Trump-supported pending lawsuit seeking to declare the Affordable Care Act unconstitutional and another lawsuit against the U.S. Postal Service over policy changes that led to mail delays.

“As the state’s chief law enforcement officer, I’d be negligent if I didn’t add that there is so much concern in the fact that our president is incapable of calling out white supremacy,” Frey said. “Law enforcement deserves so much better.”

Trump’s Sunday visit comes less than a week after Vice President Mike Pence held a rally for the president’s re-election in Hermon, where he touched on a few Maine-specific themes and urged voters to back Republican Dale Crafts in his bid to unseat Democratic U.S. Rep. Jared Golden.

Gov. Janet Mills later criticized the vice president for violating the state’s coronavirus gathering limits, which generally restrict outdoor gatherings to crowds of 100 people. About 800 people showed up to hear Pence speak, and hundreds more appeared to trickle in after the vice president began speaking.

Mills did not say if the state would enforce violations of gathering limits during Trump’s Sunday visit, but advised anyone who attends the gathering to get tested.