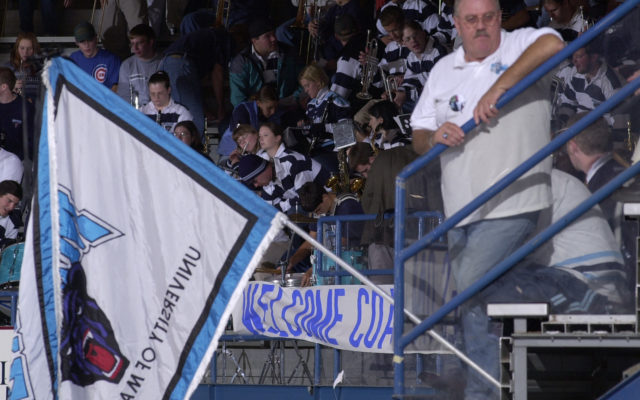 Contributed • October 22, 2020
By Larry Mahoney, Bangor Daily News Staff When you think about the qualities of a superfan, Jeff Harris checked all the boxes for the University of Maine. He was a fixture at sporting events for many years and was often seen at Black Bears games waiving a large flag with the big block “M” in the middle of it.

When you think about the qualities of a superfan, Jeff Harris checked all the boxes for the University of Maine.

He was a fixture at sporting events for many years and was often seen at Black Bears games waiving a large flag with the big block “M” in the middle of it.

But his boundless enthusiasm and school spirit will live on.

Harris was a fixture at football tailgate gatherings. During UMaine’s 1999 Homecoming festivities, he earned two of the five awards for the best picnic presentations. He then went to the game and energized the crowd, especially the students, with his passion for the Black Bears.

“The word I would use [to describe Harris] is unparalleled,” said Nonni Hilchey-Daly, former president of the university’s M Club, a member of the UMaine Athletic Advisory Board and the former associate commissioner of Hockey East.

“He had a huge heart and his heart was blue, not red,” Daly said. “He could inspire the students to be just as fanatical as he was.”

She said Harris always went the extra mile to show his support for the athletic program, the coaches and the players.

“Derek used to tell me the greatest thing about playing at home was the student section in the balcony and Jeff was right there leading the charge,” Damon said. “It gave Derek goose bumps when he came onto the ice.”

Harris’ liveliness, loyalty and zest were contagious, and his ability to inspire the crowd enhanced UMaine’s home-ice and home-field advantage.

Harris was not just a fixture at home games. He also followed UMaine teams on the road.

Damon said another of Harris’ endearing qualities was his positivity. It didn’t matter if the team was winning or losing, Harris was always supportive and would always say encouraging words to the players to give them a lift.

“That meant something to them,” Damon said.

Harris was a Guilford native and 1963 graduate of Piscataquis Community High School in that town. He served in the Army before attending the University of Maine and earning a bachelor’s degree in education in 1972.

In 1987, he earned a master’s degree in education administration from UMaine.

Harris was on the board of directors for the University of Maine Alumni Association and developed a residential life program for the American University of Bulgaria. He taught in several area school systems and was the head of resident life at the Eastern Maine Community College in Bangor.

Harris, a former campus resident director at UMaine’s Gannett Hall and at Husson University in Bangor, played a major role along with head coach Shawn Walsh in the formation of the “Mainiac” student cheering section for UMaine hockey games.

Lee Academy athletics director Randy Harris, Jeff’s nephew, said his uncle was a giver rather than a taker.

“He was a very caring individual. I was at Husson when he was there and he always took care of students who didn’t have a place to go for Thanksgiving or Christmas. He was the University of Maine’s biggest fan. He was a great man,” Randy Harris said.

Jeff Harris was involved in the UMaine cheerleading program, including a stint as an assistant coach. He served as the longtime advisor to the team and helped raise funds to support it.

“Jeff was the staple at all UMaine hockey games and football games in the stands, proudly waving his University of Maine flag,” a tribute on a UMaine cheerleading Facebook page read.

“To say that Jeff was a huge part of the University of Maine cheer program is beyond an understatement. Every football game, countless trips to Daytona and, of course, our tailgate meals. We are so incredibly thankful for our time with Jeff and the impact he had on the University of Maine community! We love you Jeff forever and always! We certainly have the best guardian angel.”