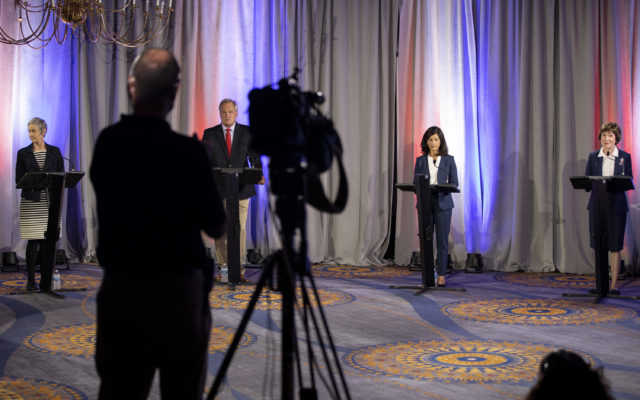 With coronavirus and other domestic challenges occupying the headlines, foreign policy has largely been sidelined in Maine’s U.S. Senate race, in stark contrast to previous elections.

U.S. Sen. Susan Collins’ first re-election campaign in 2002 was dominated by debate over the war in Iraq, which the Republican supported while joining wide majorities in both houses of Congress in a foreign policy move that has dominated the landscape for nearly a generation.

The fourth-term incumbent, who sits on the Senate Intelligence Committee, has a long and developed record on the issue. Predictably, House Speaker Sara Gideon, a Democrat, and independents Max Linn and Lisa Savage have less-fleshed-out foreign policy stances. They have generally discussed them little in this inwardly focused election year.

The next Senate will face an array of challenges abroad, however, including an Iran with growing nuclear capabilities and broad debates about what America’s role in the world should be as conflicts in Iraq and Afghanistan stretch on. Here is where Maine’s candidates stand.

While Collins supported the wars in Afghanistan and Iraq early in the 2000s, she has also voted at times to check executive war power. In 2007, she backed a failed Democratic proposal to condition $50 billion in Iraq war funding on a plan to withdraw troops. She supported a resolution this year that would have reined in the president’s war powers with respect to Iran. The resolution passed the Senate but was successfully vetoed by President Donald Trump.

The Maine senator opposed then-President Barack Obama’s 2015 nuclear deal with Iran, arguing the inspection regime was insufficient and Iran would be capable of building a nuclear weapon once it expired. She has backed legislation to increase sanctions against Iran.

Collins also supported legislation to sanction people and banks contributing to Chinese efforts to infringe on Hong Kong’s autonomy. She championed legislation last year requiring the U.S. to report on the Chinese crackdown against minority Uyghurs and sanction officials based on that.

She opposed many of Trump’s proposed cuts to international aid, and has consistently advocated for aid to Israel, a close U.S. ally. She co-sponsored a bill in 2018 conditioning aid to the Palestinian Authority on the organization ceasing to pay monetary rewards to terrorists and their families and supported legislation to counter boycotts of Israel.

Gideon has been critical of Trump’s foreign policy, arguing the president has harmed America’s relationships with its allies by withdrawing from international agreements and pushed the country closer toward conflict with Iran by dismantling the Obama-era nuclear deal.

She supports rescinding the 2001 and 2002 military use of force authorizations used by presidents of both parties as the legal basis for a range of military engagements in the Middle East, and says Congress should reassert its role in considering proposals to authorize the use of targeted, time-limited military force in specific places.

Gideon considers Israel an important ally and supports continued U.S. aid, but she also supports the reinstatement of aid to Palestine, which the Trump administration slashed in early 2019. She said she supports a two-state solution to the Israeli-Palestinian conflict — which has been U.S. policy since 2002 — and that the Palestininan people should be at the negotiating table.

The Democrat has criticized Collins over the senator’s vote to confirm Director of Intelligence John Ratcliffe, whose nomination was once balked after it was revealed he overstated claims about his record as a prosecutor in Texas. Collins’ campaign has criticized Gideon as being vague on foreign policy after a circular answer on a Maine Public call-in show this summer.

Savage, a longtime anti-war activist, says that Congress should repeal the 2001 and 2002 use-of-force authorizations. She goes much further than Gideon in calling for an end to continued military aid to Israel, citing concerns about annexations and human rights abuses against Palestinians. That position would stand out in Washington, where support for Israel has a largely bipartisan consensus.

Savage is critical of Trump’s decisions to pull out of international accords including the Paris Climate Agreement and the Iran nuclear deal, and says the U.S. should work more closely with its allies.

Linn calls for ending U.S. military engagements in the Middle East, something politicians of both parties have talked about for years that has usually run into complications due to longstanding consequences of American intervention in the region. Linn also said he considers Israel an ally but thinks the U.S. should develop alliances with other Middle Eastern countries too.

The retired Bar Harbor financial planner said he supports Trump’s decisions to withdraw from international agreements such as the Paris Climate Agreement and the Iran nuclear deal, saying neither was negotiated from an “America First” mindset.

Linn has also made opposition to immigration central to his campaign, calling for a five-year ban on all immigration to the U.S. citing current economic hardships.