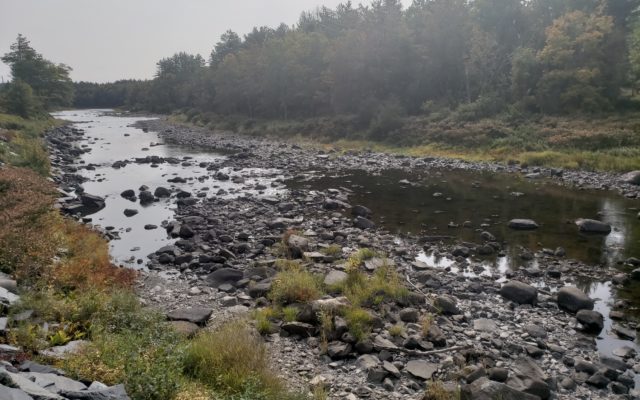 Ernie Clark, Bangor Daily News Staff • September 24, 2020
Clair Hall has always lived along the bank of the Piscataquis River in a family home where the town line between Dover and Foxcroft diagonally divided the kitchen until the towns merged in 1922.   Hall has seen low water on the river before when a nearby dam was being repaired, but he’s never seen the waterway as dry as it has been during the drought of 2020.

Hall has seen low water on the river before when a nearby dam was being repaired, but he’s never seen the waterway as dry as it has been during the drought of 2020.

“I don’t know what the water table is, but it’s got to be at historic low levels,” said Hall, a 63-year-old insurance agent. 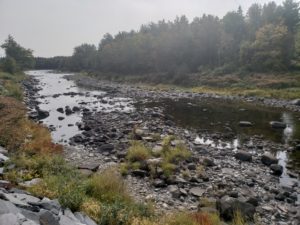 The U.S. Geological Survey’s monitoring station at Low’s Bridge in Guilford reported Sept. 23 that the Piscataquis River was at its lowest level for any Sept. 23 since record keeping at that location began 117 years ago.

It also marked the sixth consecutive day a new low had been recorded for each of those September dates, according to Nick Stasulis, chief of hydrologic surveillance for the agency’s Maine Water Science Center in Augusta.

The stream flow that day was approximately 8 cubic feet per second, which Stasulis likened to eight basketballs filled with water flowing under the covered bridge every second. 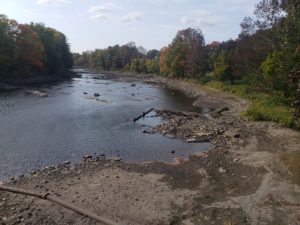 The current stream flow on the Piscataquis River is approaching a record low for any date. Stasulis said the lowest flow ever measured at Low’s Bridge was 5 cubic feet per second back in the early 1900s.

But it’s nothing new this year in drought-stricken Maine, as 16 different U.S. Geological Survey monitoring stations around the state reported record-low stream flows for Sept. 23.

“Earlier this summer it was limited to northern and eastern Maine and sporadically southern and western Maine, but as it’s gone on the conditions have really spread to the entire state,” Stasulis said.

Among other waterways experiencing a record-setting low stream flow is the Mattawamkeag River, typically one of the more flood-prone flowages in Maine during the spring.

“It’s terrible. It’s all rocks,” said Janet Grondin of the Lake Molunkus Sporting Camps, located 11 miles south of Mattawamkeag. “I don’t know how many feet it’s down but it just breaks my heart when I drive by there.”

Grondin said the water at Lake Molunkus also is lower than normal, but it hasn’t hurt her business.

“Even though the lake is down, it’s had no impact on the fishing. The fishing is excellent,” she said. “Molunkus is very shallow anyways, and what it’s done is the water’s not going over the causeway on the south end and the fish are kind of stuck in the lake.”

Most of the state’s inland fisheries are not so fortunate, according to Tim Obrey, a regional biologist with the Maine Department of Inland Fisheries and Wildlife based in Greenville.

Stasulis said one reason recent water levels are so noticeable is because this is typically the lowest time of year for stream flows.

“When you’re seeing a record low for a day when it’s usually really low already, that’s when you start to see big visual changes in the river,” he said. “If it was the lowest it’s ever been for a day in May, it wouldn’t look that dramatic because the flows are usually a lot higher in May.”

The current drought is on track to be the most significant in the state since a multi-year drought  in the early 2000s, with a smaller event taking place in 2016.

“Certainly the impacts for groundwater were much worse during the early 2000’s, when there were 17,000 wells in Maine that were reported as going dry,” Stasulis said. “A lot of those were dug wells, and I think people learned their lesson back then and drilled new wells and that has made water availability more reliable in the future.”

The Maine Emergency Management Agency started a Dry Well Survey in August, and 92 dry wells around the state have been reported as of Sept. 24, according to Amy Carole, the agency’s public information officer.

Fifteen of the state’s 16 counties have reported at least one dry well, with Piscataquis County the lone exception, according to the Dry Well Survey.

Stasulis said Maine typically experiences a wet autumn and needs a similar scenario this year to make up for a 4- to 6-inch precipitation shortfall.

“But certainly if we go into the winter below normal like we are now for rainfall, stream flows and groundwater level and then we don’t get a significant snowpack, it could really start to compound the problem for next year,” he said.

Hall, from his home near the now-rocky Piscataquis River, offers a more optimistic view based on personal experience.

“Last year at this time, it was low but not as low as what it is [now],” he recalled.  “We have friends that leave here at this time of year each year, and within a week after they left last year we had a bunch of rain and the river was back at full pond so it can change really quick.”