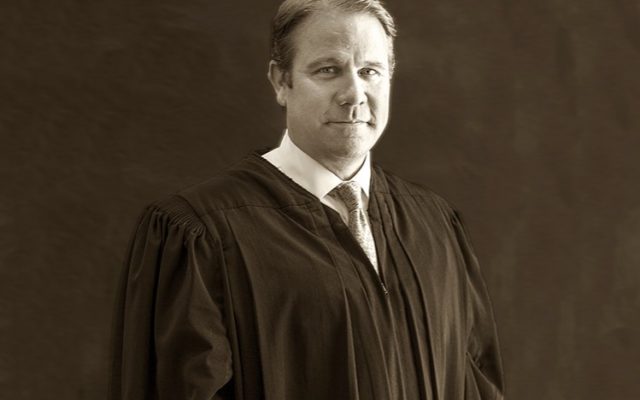 Lance Walker was one of five U.S. District Court judges across the country who ruled on a challenge to the Trump administration’s so-called “gag rule” that prohibits some federally funded health care providers from referring patients for abortions.

The 48-year-old Falmouth resident, a 1990 graduate of Foxcroft Academy, was the only judge appointed by President Donald Trump to weigh in on the matter at the lower court level, and the only one of those judges who refused to halt its implementation.

While Walker sided with the Trump administration in that example, the Trump appointee has actually ruled against the Trump- and Republican-aligned sides in cases more often than he has ruled in their favor since he was elevated to a lifetime seat on the federal bench nearly two years ago.

Walker twice has rejected Maine Republicans’ attempts to nullify ranked-choice voting, most recently last week. He has upheld Gov. Janet Mills’ coronavirus quarantine requirements for out-of-state visitors that Trump’s Justice Department opposed. He rejected a challenge from industry groups to a Maine privacy law that limits what internet service providers can do with consumers’ data. And he sided with the American Civil Liberties Union, a frequent Trump opponent, in a student’s First Amendment challenge to school district regulations.

Analysts and court watchers agree that Trump’s appointees to the U.S. Supreme Court and appellate courts have tipped the federal court system to the right. But the impact on the U.S. District Court, where Walker sits, is harder to measure, according to Stephen Burbank, a professor at the University of Pennsylvania’s Carey School of Law in Philadelphia.

“Typically, presidents have less influence in selecting district court judges than do home-state senators, and less influence than they do in selecting court of appeals judges or Supreme Court justices,” said Burbank, an expert on the federal court system. “Even at the Supreme Court level, there are numerous examples of justices who proved to be disappointments to the presidents who nominated them. That said, there has been a concerted effort in this administration to find people who would not disappoint those who nominated and confirmed them.”

Walker was appointed to replace U.S. District Court Judge John A. Woodcock Jr. in May 2018 on the recommendation of Maine’s two U.S. senators, Republican Susan Collins and Independent Angus King. The Senate confirmed him on Oct. 11, 2018.

His rise to the federal bench has been rapid since Gov. Paul LePage first nominated him as a Maine District Court judge in 2014, does resemble Trump judicial appointees in some ways. He’s younger than his colleagues were when they became federal judges, and he was a member of the Federalist Society — the influential, nationwide group of conservative lawyers that’s been a guide to Trump in selecting judicial nominees — while he was in law school, first at the Vermont School of Law and then at the University of Maine. The Milo native has also been a member of the National Rifle Association intermittently since 2001, according to a Senate questionnaire.

But that has far from guaranteed that his rulings will go the way Trump or Republicans would prefer.

With ranked-choice voting, Walker has now twice ruled against GOP challenges to the voting method — once in 2018 when then-Rep. Bruce Poliquin sued after the ranked-choice tabulation resulted in Democrat Jared Golden winning Maine’s 2nd Congressional District seat and again last week in a case brought by four Maine voters. Walker appears to be the only federal judge to have ruled on the use of ranked-choice voting in federal elections.

In the Poliquin case, the judge found that setting aside the voting system would “undermine rather than safeguard the most relevant public interest,” referring to people’s ability to use the voting method if they wished to do so.

In the most recent lawsuit, the plaintiffs claimed the system effectively disenfranchises voters who do not rank a second choice — either because they are confused or do not want to — and that those voters are more likely to be older or less educated.

“My limited charge is to determine only whether the RCV Act is contrary to the text of the United States Constitution,” Walker said last week. “It is not.”

He suggested that those who don’t like the voting method should work to repeal it, but those efforts also have failed.

Since the state put in place a number of measures to prevent the spread of the coronavirus, Walker has ruled in two separate cases that Gov. Janet Mills’ 14-day quarantine requirement for people coming to Maine from out of state is probably constitutional.

In May, he denied a motion for a preliminary injunction filed by southern Maine campground and restaurant owners. Walker found that the case had potential, but the plaintiffs had not yet shown that they would prevail in the long run, one of the standards for granting the injunction, which would have stopped Mills’ requirement.

Earlier this month he dismissed a similar lawsuit brought by business owners that asserted the governor’s order violated their right to due process.

“The Supreme Court has long recognized that a state can avoid this close constitutional scrutiny of alleged violations of substantive due process during a public health crisis,” Walker said in a 22-page ruling. “This collective crisis ought to have imposed a sense of collective humility given the long shadow cast by all that we do not know about the disease.”

Hawaii “imposed the quarantine to prevent the importation and spread of COVID-19 and to avoid overwhelming the health care system, which are compelling state interests,” Otake said.

That case was not assigned to Walker but to U.S. District Judge Nancy Torresen, an Obama appointee. She sided with the governor, but Trump appointees in other states found that gathering restrictions when applied to houses of worship were unconstitutional.

On May 29, the U.S. Supreme Court rejected a California church’s appeal over that state’s gathering limits in a 5-4 ruling. That same week, Maine started allowing gatherings of up to 50 people. The same limit is in place today, but outdoor services may include 100 worshippers.

Walker ruled last month that Maine’s strict internet privacy law is not preempted by federal law as internet service providers had argued. While Walker found that he did not have enough evidence on whether the law unfairly regulates commercial speech to dismiss it outright, he said the plaintiff’s arguments were “attempting to create a conflict where none exists.”

The “opt-in” law prevents providers from using, disclosing, selling or permitting access to personal information unless a customer gives them permission to do so.

Attorney General Aaron Frey, a Democrat, called the ruling a “huge victory” and said he was confident the law would withstand further scrutiny, including an appeal to the First U.S. Circuit in Boston.

The judge in October granted the then-15-year-old student’s request for a temporary restraining order, and wrote that she showed a likelihood of success as the case moved forward.

Aela Mansmann, who was represented by the ACLU of Maine, admitted to posting the sticky note that proclaimed, “There’s a rapist in our school and you know who it is.”

Earlier this month, a three-judge panel with the First Circuit upheld Walker’s ruling. Judge Sandra L. Lynch found that the school “is not permitted to punish a student merely because her speech causes argument on a controversial topic.”