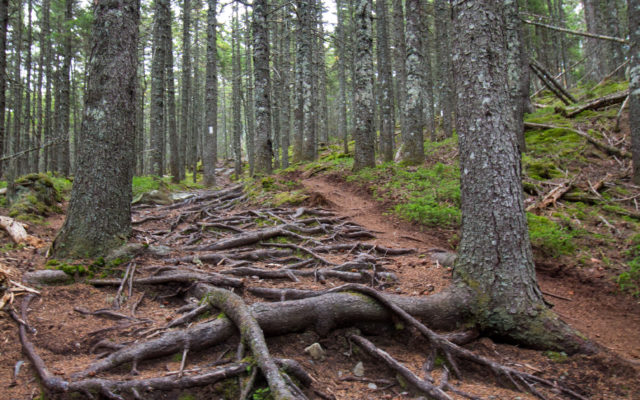 Susan Sharon, Maine Public • July 13, 2020
Every year, several thousand adventurous souls set out to hike all 2,190 miles of the Appalachian Trail. But this year, because of the coronavirus pandemic, thru-hikers have been advised to put their dreams on hold.

Every year, several thousand adventurous souls set out to hike all 2,190 miles of the Appalachian Trail. But this year, because of the coronavirus pandemic, thru-hikers have been advised to put their dreams on hold.

That refusal has created tension between those who want to push personal boundaries and those who say there should be limits on public safety.

Back in March, the Appalachian Trail Conservancy, which manages and protects the trail from Georgia to Maine, made an unusual decision: “we asked people that hadn’t started their hike to postpone it, and we asked people who were on the trail to please leave.”

Sandi Marra, president and CEO of the conservancy, said that even before the pandemic there were regular outbreaks of other viruses in crowded bunkhouses and shelters. Hikers often do not have access to soap and water for days at a time, so hygiene can be a challenge. There were concerns hikers would infect each other or spread the virus in rural towns where they stopped to pick up food and supplies.

Overnight facilities and privies along the trail were closed.

But then came a tremendous flood of day-hikers in more populated areas trying to escape the confines of their homes.

“We started getting reports of overflowing parking lots,” Marra said. “People parking on highways, parking on private land. Tons of people driving into these small communities. A lot continued to disregard the basic guidance of having masks.”

At that point everyone was asked to get off the trail because of the inability to socially distance on the crowded, narrow footpath. Marra said managing the surge of day-hikers continues to be a struggle in certain states.

But that is not the case in the tiny town of Caratunk, where Greg Caruso has noticed a big drop in the number of people coming through.

Known as “the ferryman,” Caruso’s job is to safely transport hikers across the swift-moving Kennebec River, which can rise several feet in a matter of minutes when water from upstream dams is released. Caruso’s canoe is the only sanctioned means to cross the river. There is even a white blaze on the inside that officially marks the Appalachian Trail.

“Last year, I took 280 people across the river by this point between Memorial weekend and July,” he said. “This year I’ve taken 50. But I don’t know what to expect. Maybe there’s people starting now.”

In a typical year, only 1 in 4 hikers who plan to complete the trail actually meets the goal, about 1,200 people. Marra estimates that this year only half the usual number will finish. Zack Chen of Poughkeepsie, New York hopes to be one of them.

“I was like, as long as I can social distance and not have too much interaction with the public and the locals, it should be OK,” Chen said.

At a rest stop near Baxter State Park, Chen, who goes by the trail name “Eager Beaver,” said he first tried to complete the Appalachian Trail in 2018, but he fractured his foot and had to give up. In March of this year, Chen got back on the trail again in Georgia a few days before state-imposed shutdowns and quarantines took effect. By the time he arrived in North Carolina, he said hostels were closing and hikers were being told to go home. That is where Chen said he had an unpleasant encounter with a postal worker.

“He pretty much yelled at me for hiking and putting peoples’ lives in jeopardy.”

Chen rented a car and headed home that very same day. He waited until July before trying again. This time he is going in the reverse direction, from Maine to Georgia.

But for those who stayed the course, there was harsh criticism from the online trail community.

“We did hear that. Right at the peak, when everything was getting worse, people were throwing around like ‘Grandma Killers’ and like stuff like that,” Kristen Glennie said.

Glennie and Mary Szatkowski, both from Maine, finished their hike July 4. Along the way, Szatkowski said, they were confident they could follow CDC guidelines.

“When we went to town we would feel like we were being safer than the residents there. We were masking up. We were sanitizing and seeing like, do we think we can follow these directions well enough, and we did feel like we could,” Szatkowski said.

On July 4, preparing for their final 15 miles of the trail, Drew Miller and Dustin Kornegay said they were feeling good and tired.

“Really, until we got several weeks in, it wasn’t that big of a thing here yet,” Miller said.

The two quit their jobs before beginning their months-long odyssey on Feb. 29. Kornegay said they briefly discussed giving up.

“We debated it. I mean, I know for me personally, I put so many other things on life on hold to come and do the trail, and this was one my one chance to do it, so I was not gonna stop,” Kornegay said. “That’s what it came down to.”

But northbound hikers who were a few days ahead of Miller and Kornegay faced one other obstacle: the Appalachian Trail officially ends at the summit of Katahdin in Maine’s Baxter State Park, and the park did not completely open until July 1. So several people essentially sneaked in to do the climb, and that created more hard feelings when they posted pictures online of themselves doing it.

“That puts a bad mark on the trail community,” said Paul Renaud, who runs a hostel for hikers in the nearby town of Millinocket. “That’s just saying, ‘no, you can do whatever you want. Don’t listen to anybody.’”

Renaud’s business is off this year because of the coronavirus. But, he said, there is one silver lining — the more remote stretches of the trail have been given a bit of a break. And thru-hikers who are just finishing now say that has made their experience even more worthwhile.

“I don’t know, I think we’re living our best lives right now. Been nice having most everything to ourselves,” Kornegay said. It will be strange leaving the Appalachian Trail to return to a world in the midst of a pandemic, he said.

And, plus, his wife will want him to find a job.