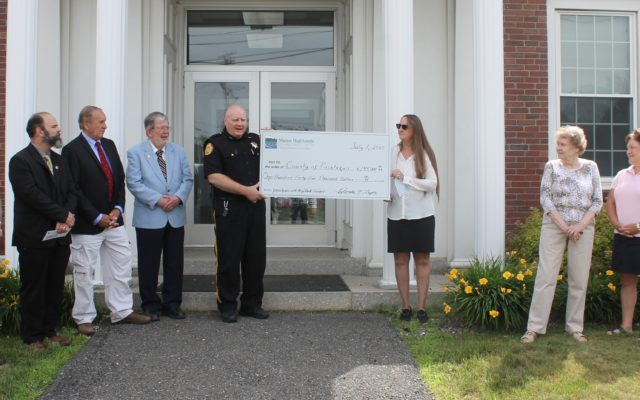 Stuart Hedstrom • July 7, 2020
GUILFORD — Thanks to the generosity of the Maine Highlands Federal Credit Union, the patrol and investigation divisions of the Piscataquis County Sheriff’s Office will have a new home in downtown Guilford at the former Key Bank building. The announcement of the identity of the previously anonymous $145,000 donor was made on the front lawn of the 2 Hudson Avenue location on the morning of Tuesday, July 7.

GUILFORD — Thanks to the generosity of the Maine Highlands Federal Credit Union, the patrol and investigation divisions of the Piscataquis County Sheriff’s Office will have a new home in downtown Guilford at the former Key Bank building. The announcement of the identity of the previously anonymous $145,000 donor was made on the front lawn of the 2 Hudson Avenue location on the morning of Tuesday, July 7.

“This is the first time we have ever done something this big,” Maine Highlands Federal Credit Union President and CEO Rhonda Taylor said, as the $145,000 contribution is the largest in the business’ 54-year history.

“Normally we are just in the background quietly doing things that nobody hears about but because there’s not a lot of things going on this year for festivals that we are supporting and those kinds of things, we said this is a good year to support something in the community that will help everyone,” Taylor said. “We decided we were going to write one big check to do that and we chose the Piscatquis County Sheriff’s Department because when we were robbed several years ago at gunpoint — every one of our tellers had a gun pointed at them during that robbery — they were there for us.

“They were there instantly, they did everything correctly and for days and weeks and months afterwards they were there riding through our parking lot, coming in and asking our tellers how we were doing. Then when we saw how Piscataquis County was when President Trump came here we were so proud of how the citizens of this county reacted and treated everyone with respect no matter their belief, it was time to really give back.”

“Not only does it help the sheriff’s department but it helps every taxpayer in Piscataquis County as well so we had several reasons for doing what we did and it was the perfect time to do that,” Taylor said.

“I am proud to live in a community of people who can come together as one, and I am especially proud to work for Maine Highlands Federal Credit Union, not just a financial institution, but an organization that understands the importance of giving back to the communities that have made the credit union the success that it is today,” she said.

A question of Tuesday’s ballot has now been rendered moot thanks to the credit union. The question for county residents is voting on a bond for the $145,000 property purchase price, which would have come with an additional $29,100 in interest over a decade. The ballot question was written and approved by the Secretary of State well before the donor came forward,

Piscataquis County Sheriff Robert Young said he learned of the generosity of the Maine Highlands Federal Credit Union about three weeks ago. “We had no inkling that this was in the works at all,” he said.

Young said Taylor “called me one morning and said ‘here’s what we’d like to do, we would like to donate the $145,000 for the purchase.’ I listened to that and then I had to repeat it back to her to make sure I understood that right.”

“We have been, for years, trying to find a permanent home for our law enforcement divisions,” Young said, as the county is currently leasing space at the former Guilford Primary School. “Where they are now, it’s rented space, it’s cramped still. Evidence is kept in Dover, their office is in Guilford, they are constantly going back and forth. They don’t have rooms for interviews so this alleviates all of that. At some point down the road we need to move dispatch out of the jail and there is plenty of room here for that.”

“As soon as the COVID restrictions are lifted we are going to be offering classes for people who are sentenced to home confinement,” Young said. “We are trying to figure out where we could do that, this allows for that to happen. So this really is a building that will help, certainly the law enforcement but dispatch and jail for now and certainly into the foreseeable future.”

The sheriff said a permanent home for the patrol and investigations has been sought for several years. “Guilford for us is a very central area, 70% of our calls are Guilford, Sangerville, Abbot, this general area,” he said. “As far as the actual location it is ideal for us.”

“I can’t say thanks enough, it is an extraordinary gift, Young said. “I think it needs to be viewed not as just a gift to the sheriff’s office or to the county but to the people of Piscataquis County because it really will benefit the entire county so we are greatly appreciative.”

“We are hoping to be in the first of September,” he said about the move. “Other than a few tweaks and setting up the internet and that sort of thing it’s ready for us to move into. It’s in very good condition. There’s offices already in place so the move will be very easy.”

During a county commissioner’s earlier in the morning Young said the donation comes with a pair of conditions. “They need to be recognized as the donor and that it be permanently used as a sheriff’s office,” he said.

“We want to thank them for the board’s decision to make this donation,” Commissioners Chair Jim White said about the Maine Highlands Federal Credit Union board of directors making a unanimous decision to donate the $145,000. “It was not our solicitation.”

“We are thrilled that the taxpayers will not have to come up with the money and it will benefit the community,” he said.

Commissioner Wayne Erkkinen said the credit union donation is a sign of confidence in the sheriff’s department. “They do a good job and this shows their appreciation,” he said.

White also thanked County Manager Michael Williams, who he said was instrumental in finding a home for the sheriff’s office.

“It’s going to be a big plus,” Sen. Paul Davis, R-Sangerville said standing in front of the bank building. “I was a state trooper for many years and I used to sit right over there matter of fact.”

“I would say it’s going to make it easier for the sheriff’s department,” Davis said. “So a big thank you to the credit union.”