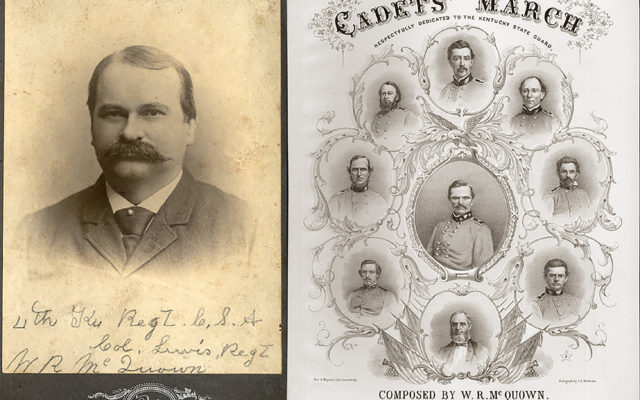 Thanks to you, another Confederate gravesite is confirmed in Maine

Troy R. Bennett, Bangor Daily News Staff • July 1, 2020
Thanks to a pair of alert Bangor Daily News readers, an eighth Confederate soldier’s grave has been located in Maine.   After reading Saturday’s story detailing how seven Southern Civil War soldiers came to be buried so far north of the Mason-Dixon line, both Bill Koed and Cheryl Patten of the Maine Old Cemetery Association Facebook group pointed out the Skowhegan grave of William R.

Thanks to a pair of alert Bangor Daily News readers, an eighth Confederate soldier’s grave has been located in Maine.

After reading Saturday’s story detailing how seven Southern Civil War soldiers came to be buried so far north of the Mason-Dixon line, both Bill Koed and Cheryl Patten of the Maine Old Cemetery Association Facebook group pointed out the Skowhegan grave of William R. McQuown. 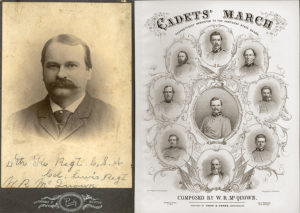 Confederate veteran and composer William R. McQuown’s “carte-de-visite” photograph (left) was taken in Boston and indicates he lead regimental bands during the Civil War. In 1860, when he was 18 or 19 years old, he composed the “Cadets’ March” in his home state of Kentucky. McQuown is buried next to his wife Sallie in Skowhegan. Images courtesy of the Tennessee State Library and Archives and the Johns Hopkins Sheridan Libraries and University Museums

“I am not surprised that another Confederate grave has been found in Maine,” said Brian Swartz, a Maine Civil War historian who helped locate two of the previously known burial sites.

As with other history buffs who spoke with the Bangor Daily News for the original story, Patten hopes McQuown’s grave escapes vandalism amid the national controversy over public symbols of the Confederacy.

“I think these monuments and stones are part of our history. Maybe a not very pleasant part as we look back,” said Patten in a Facebook post. “I am not in favor of trying to change or delete history. [I] don’t agree with a lot of it — but it happened — and we need to live with it and make what we consider the needed changes from here forward.”

A musician by trade, McQuown was born in Bardstown, Kentucky, about 40 miles southeast of Louisville, on March 1, 1842. In 1860, when he was about 18 years old, McQuown composed the “Cadets’ March” in honor of the Kentucky State Guard. The sheet music was published in Louisville.

While his home state never joined the Confederacy, McQuown did. He enlisted in Company C of the 2nd Kentucky Volunteer regiment at Camp Boone, Tennessee on Aug. 2, 1861, according to official records. He was 19.

Many years after the war, McQuown’s “carte-de-visite” photograph was taken in Boston. The popular, 19th-century photos were often made of famous figures and then sold as collectibles. People would trade them and paste them into albums. The Tennessee State Library and Archives has a copy of McQuown’s picture in its collections. Pencil writing on the front and back indicates he served as band leader for the 4th Kentucky and 1st Tennessee Regiments until the end of the war in 1865.

For several years after the war, McQuown was listed in Louisville business directories as a musician and music teacher. At some point, he seems to have moved Boston. It was there he composed and published the songs “Those Witching Eyes” in 1873 and “Memory’s Magic Spell” in 1878. The latter was dedicated to a Mrs. J.A. Crowell of Bangor.

Boston marriage records indicate McQuown married Sallie Savage of Madison, Maine, on Oct. 23, 1888. He was 47 and she was 32. Their union was short lived, however. McQuown died of heart disease on March 1, 1897 at the age of 55. Sallie lived to be 83 before joining her late husband under a shared Skowhegan tombstone in 1939.

They were probably buried there due to its proximity to her nearby hometown. There’s no indication that McQuown ever lived in Maine.

He might be a late addition to the list of Confederates taking their eternal rest here but McQuown may not be the last.

“The odds are very good that more Confederates are buried in Maine cemeteries,” Swartz said. “Since your article ran late last week, a friend has alerted me to a possible ninth Confederate buried in the midcoast. I am researching that gentleman, who may have been from Maine.”