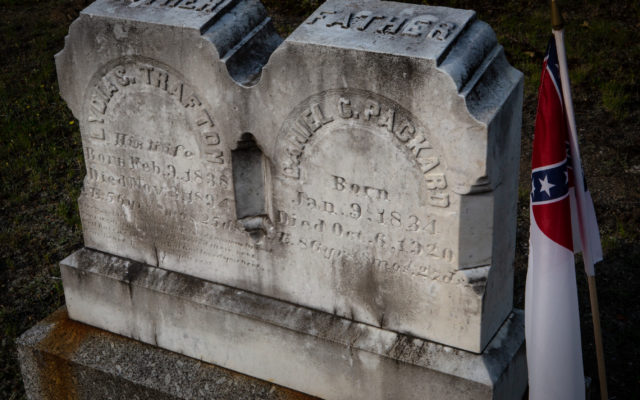 How seven Confederate soldiers came to be buried in Maine

Troy R. Bennett, Bangor Daily News Staff • June 28, 2020
Controversial Confederate monuments are coming down all over the southern United States. Crowds toppled some, while others were whisked away in the dead of night.

Controversial Confederate monuments are coming down all over the southern United States. Crowds toppled some, while others were whisked away in the dead of night. From Virginia to Florida, Americans are grappling with a racist past often glorified in bronze and stone.

Maine has its own racist history, but no statues commemorating Confederate heroes. Still, seven Confederate veterans are known to be buried here. None of the grave locations are secret and most are easily found with a Google search.

That’s why some local historians worry they may become targets for vandalism due to their Confederate flags and markings.

“With everything that is going on right now — monuments being defaced — I worry something will happen to this sacred burial spot,” said Tia Wilson of the Durham Historical Society and town cemetery committee. “Over the past several years, the Confederate flag has been removed from the grave.”

One of the graves is in Wilson’s town. While she does not sympathize with the old southern cause, she does respect historic, hallowed cemetery grounds and doesn’t want to see any destruction there.

Brian Swartz, a historian and former Bangor Daily News editor, is the author of the long-running Civil War-themed blog “Maine at War” and a three-book project chronicling Maine’s role in the war. He’s also published stories about three of the state’s Confederate gravesites.

“As for not publicizing where the Confederates are buried, the grave-site information is already available online,” Swartz said. “As for historical research, I believe it’s important to present the stories of Mainers, both Yankee and Confederate, involved in the Civil War.”

The BDN, with help from several historians, has pieced together how the seven known Confederate veterans likely came to rest forever in the Pine Tree State.

In the fall of 1862, a coffin arrived in town by train. It was supposed to contain the remains of Union Army Lt. Charles H. Colley.

“Wounded in a knee during the 10th Maine’s epic and bloody participation in the Aug. 9, 1862 Battle of Cedar Mountain in central Virginia, the 29-year-old Colley was evacuated to a Union hospital in Alexandria, Va.,” Swartz wrote in a 2015 blog post.

Colley eventually died at the hospital in September.

When his family opened the coffin in Maine he wasn’t there. Instead, they found an unknown Confederate soldier dressed in gray.

With no one to send the young Confederate back to, the “Ladies of Gray” took up a collection, purchased a cemetery plot and buried him like one of their own.

The headstone carved for him still stands today. It reads: “Stranger, a soldier of the late war, died 1862, erected by the Ladies of Gray.”

A modest, granite stone put up in recent times marks the grave of another unknown Confederate soldier. Four different origin stories are associated with the spot — but which one is true, if any, is a mystery.

“Keep in mind, these are all legends and there is no hard evidence that any of them are historically accurate,” Wilson said.

The first tale mirrors the Stranger in Gray, where a family received the wrong body by accident and buried it. The second story is similar, where a Confederate soldier who should have been sent to Durham, North Carolina, ended up in Durham, Maine, instead.

A third possibility is that the soldier died in Maine on his way to Canada after escaping a New York prison. The fourth is that there is nobody buried there at all.

Grotton was born in Spain to a Spanish father and a mother from Lewiston. He arrived in the United States as a 15-year-old sailor and settled in Virginia. When the Civil War broke out, he joined the Virginia Cavalry.

“Discharged from Confederate service in Pennsylvania in 1865, George Grotton moved to Belfast for reasons that seem unclear,” Swartz wrote in a 2018 blog post. “In either 1870 or 1871 he married Hannah Knowlton, listed as 18 years old in the 1870 Swanville census.”

Grotton and his wife eventually had a large family. He worked as a fisherman, fishmonger, laborer, carpenter, justice of the peace and ran a pension business. Grotton also served four years on the local school board.

“His life in Belfast proves he was a pretty decent Yankee,” Swartz wrote.

Grotton died of appendicitis in 1901. His and his wife’s graves went unmarked until descendants placed metal tags on them in 2016.

Born in Exeter, Packard and his brother Dudley both moved to Quincy, in western Florida, sometime before the Civil War, settling down as homestead farmers, according to retired firefighter and cemetery enthusiast Daniel Meehan of Rochester, New Hampshire.

Meehan gives talks about the Civil War at schools, always focusing on individual soldiers’ experiences — both Union and Confederate — rather than just dates and famous generals. He also manages a 2,000-member Facebook group dedicated to researching and telling stories associated with Civil War graves. 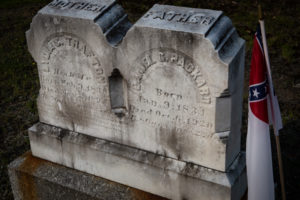 Bangor Daily News photo/Troy R. Bennett
CONFEDERATE GRAVE IN GARLAND — Daniel Packard’s grave in Garland is marked with a Confederate flag. Packard, a native Mainer, moved to Florida before the war with his brother. Both joined the Confederate army.

When the war broke out, both brothers joined the 2nd Florida Cavalry. Confusingly, there were two Civil War units which went by that designation. One served the Confederacy and one served the Union. According to Meehan’s research, both brothers served in the southern version.

It was organized close to where Packard was living in late spring 1862. The unit never left Florida, fighting at Olustee, Gainesville, and Braddock’s Farm. It surrendered on May 10, 1865.

After the war, Packard’s brother stayed in Florida while he came home to Maine. Further details are sketchy but he seems to have had a family and was married at least twice. Meehan believes Packard suffered from depression and dementia in his later years, hanging himself in 1901 at age 65.

Most of what is known about Cheever is written on the flat, rectangular stone marking his grave.

It reads: “Confederate soldier, died at Poland Springs 1878 far from his own people. Kind strangers ministered to him.”

The carved words also say that Cheever was from New Orleans. The stone is in the Ricker family cemetery. That clan used to own and operate the mineral spring resort where people would come to take the water for their health.

According to official documents, nobody from Louisiana matching his name served in the war. However, there is a record for a Robert Cheevers — with an “s” — from New Orleans. A clerk by trade, he enlisted in the Louisiana infantry at age 17 in February 1862. Six months later, he was a prisoner of war.

It’s likely the same man, with a typo either in the records or on the gravestone.

Cheevers’ entry in the record ends with the cryptic phrase, “Escaped from prison, supposed to be in U.S.”

It could mean that the man buried in Poland was on the lam when he died.

Mitchell hailed from Lovington, Virginia, where he married a schoolteacher from Dedham named Mary Dexter in October 1857.

In 1861, Mitchell joined the 49th Virginia Infantry Regiment and sent his wife and daughter to Dedham, for safekeeping.

“Mitchell possibly fought at Antietam, definitely battled Yankees at Fredericksburg and Gettysburg, and remained with the regiment until Union troops captured him on May 30, 1864,” Swartz wrote in a 2015 blog post.

After his capture, Mitchell was sent to a wretched prison camp on an island in the Delaware River where he became gravely ill. When the war ended a year later, he took an oath of allegiance to the Union and headed for Dedham to see his family.

He only got as far as Bangor.

Mitchell died, probably from pneumonia, in a hotel room there, less than 20 miles from his family.

Known but to God, Wells

This flat stone, nearly hidden at the back of a small cemetery, does not bear anyone’s name. Instead, it says, “CSA, known but to god, prisoner of war.”

Meehan’s research indicates it’s the grave of a British cabin boy named Thomas Butters. The young man was captured by Confederate pirates and then arrested in Portland Harbor after the rebels stole and blew up a ship.

In the spring of 1863, Confederate pirates marauding the East Coast aboard the Tacony captured a British ship called the Byzanthean. The cabin boy, Butters, decided to join up with the rebels and was with them in June when they stole a revenue cutter from a Portland dock. They didn’t get far before they were all captured and brought ashore.

“Church bells rang and hundreds lined the wharves to see the sight,” reads a BDN Portland blog post from 2017 detailing the whole affair. “When [the] rebels were put ashore, soldiers had to brandish bayonets to keep an angry mob off them.”

The regular Confederate sailors were held at Fort Preble in South Portland, but Butters was charged with piracy and sent to the Cumberland County Jail. According to a letter written by the Tacony’s Confederate captain, Butters was abused while in custody.

“Butters endured ‘unmerciful flog[ging]’ as he was ‘inclined to be sassy,'” Colby College student Carter Stevens wrote in his honors thesis recounting the historic events.

Stevens found records indicating Butters was sent by train to Fort Warren in Boston a year later, in May 1864. Meeham thinks Butters died en route, was taken off the train and buried in Wells.

The tombstone is dated 1863, but it is modern and placed next to an original, uninscribed fieldstone. The date discrepancy may be an understandable typo due to the battle in Portland Harbor being the year before.

As with most of the Confederate graves in Maine, much is unknown and is likely to remain that way.