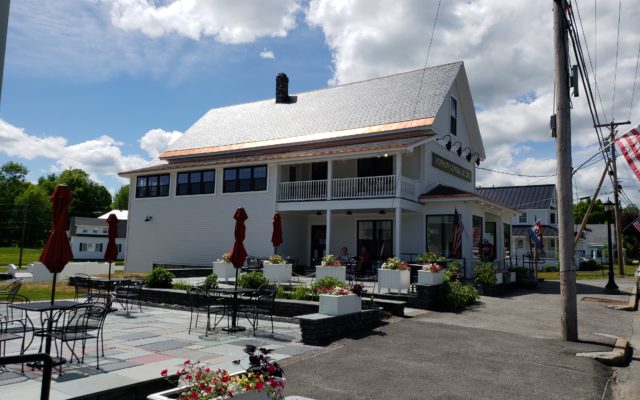 Ernie Clark, Bangor Daily News Staff • June 26, 2020
It’s a familiar story for Maine — a once-thriving manufacturing town suddenly in search of a new identity.   But unlike Bucksport, Lincoln and Old Town, communities that have been redefining themselves since their paper mills closed, one smaller town’s survival efforts boast a unique twist.

It’s a familiar story for Maine — a once-thriving manufacturing town suddenly in search of a new identity.

But unlike Bucksport, Lincoln and Old Town, communities that have been redefining themselves since their paper mills closed, one smaller town’s survival efforts boast a unique twist.

Monson faced its own uncertainty after the loss of its largest employer in 2007 — until a major benefactor brought in millions of dollars and hope of a brighter future to help rejuvenate the fabric of the community.

The Libra Foundation, a Portland-based private philanthropy, has built an arts colony, upgraded downtown buildings and created a new medical center for this Piscataquis County community of 680 year-round residents. 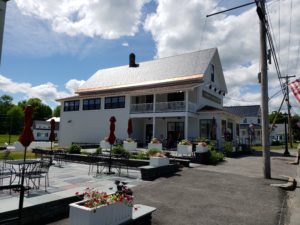 Bangor Daily News photo/Ernie Clark
NEW LOOK FOR MONSON — The new Monson General Store with its outside dining area is one of the centerpieces of the revived downtown area.

And while the true impact of Libra’s contributions on Monson may not be known for a while, town leaders are planning for a future marked by entrepreneurship and population growth.

It’s a stark contrast to the town that was reeling when Moosehead Manufacturing Co. closed after six decades of producing the kind of high-end furniture that people could pass from generation to generation.

“I was the guy that was steering the Titanic when we hit the iceberg,” said John Wentworth, an 11th-generation Mainer and the third-generation president of the family-owned company when it ceased operations. “We ran into globalism.”

Younger people started moving away to where they could find work, which meant fewer customers to support the other businesses in town. Downtown buildings began to fray around the edges and money to make improvements became more scarce.

“As time went on I started to think to myself, ‘Am I going to live long enough to see the next turnaround in Monson?’,” Wentworth said.

Libra has invested more than $10 million into creating an artists’ colony near Lake Hebron’s downtown shorefront — building on Monson’s artisan’s past — and most recently funded a medical center that will provide primary care, optometry and dental health services.

That has generated enthusiasm within the community to add high-speed wi-fi service downtown, draft a new comprehensive plan and create more opportunities for entrepreneurs to start and grow local businesses.

“It’s all so fascinating how people are working together,” said Craig Denekas, president and chief executive officer of the Libra Foundation.

The Libra Foundation was created in 1989 by Elizabeth Noyce, the former wife of Robert Noyce — the co-inventor of the microchip, an executive at Fairfield Semiconductor and co-founder of Intel Corporation.

Those efforts have included the purchase and transformation of a former mental hospital campus in New Gloucester into Pineland Farms, now a 5,000-acre working farm that sells its products around the state; the Maine Winter Sports Center, a Nordic skiing complex in Fort Kent and Presque Isle; and the Piscataquis County Ice Arena in Dover-Foxcroft.

That arena represents an extension of Libra’s interest in Piscataquis County, which ranks as the least populated with 16,800 residents, oldest at an average age of 51 and poorest with an average median household income in 2018 of $39,470 of the state’s 16 counties.

Yet Libra officials saw great potential in the area’s rich working tradition — Moosehead Manufacturing once had factories in Monson and Dover-Foxcroft, and before that era Monson was known for its working slate quarries.

The region also has a history of notable artists and craftspeople — including renowned photographer Berenice Abbott, who settled in nearby Blanchard.

Monson also is well known as the last stop along the Appalachian Trail before the 100-Mile Wilderness that leads to the route’s northern terminus atop Mount Katahdin — which adds an eclectic mix of hikers to the town’s summer population as they pass through each year.

That all spurred the Libra Foundation in 2016 to begin its purchase of approximately 30 houses and other buildings — as well as a picturesque farm just outside of town to add to its Pineland Farms operations.

Most of the buildings were renovated as homes for artists from around the country and the world who are accepted into the Monson Arts residency program designed by Stuart Kestenbaum, former director of the Haystack Mountain School of Crafts and Maine’s poet laureate.

“We grew a lot of our programming in that year and gained a lot of traction,” Monson Arts program manager Dan Bouthot said. “I think a lot of the popularity was word of mouth from people who had been here previously letting people in their circles know that they should apply for this opportunity, too.”

Monson Arts’ emergence coincided with Libra’s support in reviving the downtown — which is home to three restaurants, an art gallery and the new Monson General Store.

“We always had a lot of traffic going through town but most of it was going to Greenville or coming back on Sunday night from Greenville,” Wentworth said. “But especially last summer a lot of it was stopping in Monson. The general store was going great guns, the little gallery in town was up and going, and we have the Lakeshore House and the barbecue place that were doing even better because people were stopping.

“Sometimes you couldn’t even find a place to park.”

Things have been quieter along Monson’s main thoroughfare this spring because of the COVID-19 pandemic.

Monson Arts had just started its March programming before suspending operations when the coronavirus arrived in the United States.

Bouthot hopes to resume residency and workshop programs in August. He also is poised to build on Monson Arts’ relationship with younger artists from the region after hosting creative writing and visual arts classes for students from six schools spanning from Jackman to Newport during the most recent academic year.

“It was a pretty fruitful program,” Bouthot said. “I was just congratulating myself on making it into March without having to cancel because of snow days when everything ended.”

While activity on the arts front has been slowed by the pandemic, Monson’s revitalization has not completely stalled.

Northern Light Healthcare opened a primary-care office this month in the former Monson Elementary School — one of the first buildings Libra Foundation had purchased.

An optometrist’s office and dental clinic are set to join Northern Light and the town’s library in the building next month, giving Monson a unique one-stop medical facility for a town of its size.

“That’s a spectacular building with what they’ve done there. They spared no expense in rehabbing that school,” Wentworth said. “One of the first things someone asks when they’re thinking about moving to town is where to get health care, and to have a little medical center like that in this town is really a gift.”

Plan for the future

The transformation of the school into a medical complex represents one of the last significant building projects that Libra Foundation has planned for Monson — though it will continue its financial support for the community into the future.

“We consider construction essentially to be complete,” Denekas said. “But what has been really inspiring on the whole is the way so many people have embraced the opportunity to do something different and be hopeful. In many ways that’s what the project does as we turn the page and talk about and build upon the history here in a little different way.”

And while town manager Daniel Swain and others await results of the 2020 U.S. Census to confirm their suspicions, they say the investments of money and energy are enticing people to move to their town.

“If nothing else this place looks great, and there are people moving in,” Wentworth said. “I know of two couples that have moved into town and bought property here. One is a pair of artists who went to one of the residencies and have come back, and another is a couple with a couple of kids who are right across the street from me.

“It’s not a chamber of commerce,” Wentworth said. “It’s just a bunch of us with small businesses here trying to share thoughts and encourage people who want to start their own business and maybe attract some people to move here. That never would have happened before all this happened.”

This spring the town won a $70,000 planning grant from the National Main Street Center to develop networks within the community to foster entrepreneurship and innovation.

“It actually comes at a great time because we also had started re-doing our comprehensive plan even before we got this grant,” Swain said. “Once the comprehensive plan is written, that’s going to guide us on what to do with the grant money.

“Monson is growing right now, so we have to figure out what to do because we’re running out of space.”