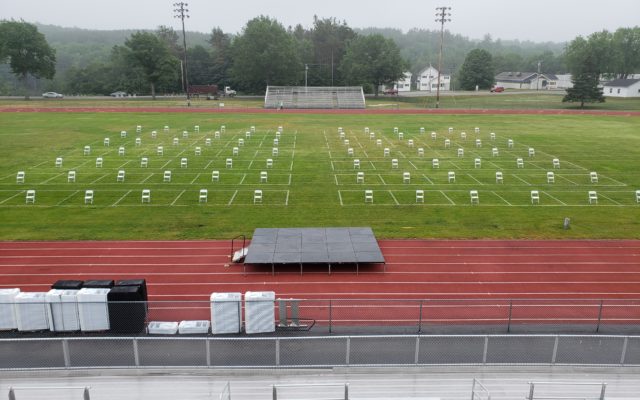 Alumnus to emerge from quarantine to give Foxcroft commencement address

Mark Stitham, M.D., had plenty of time to put the finishing touches on the commencement address he’ll give to the Class of 2020 at Foxcroft Academy in Dover-Foxcroft on Saturday morning.

He’s concluding a 14-day quarantine in southern Maine after arriving in the state on June 12 from his home in Kailua, Hawaii, where the 70-year-old Stitham has been a practicing psychiatrist and frequent actor for the past four decades.

“It’s been OK,” said Stitham. “I’ll be through the quarantine on Thursday, and the first thing I’m going to do is run out to Docks Seafood [in South Portland] and get some steamers. I don’t want them delivered.” 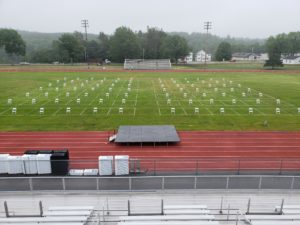 Bangor Daily News photo/Ernie Clark Oakes Field at Foxcroft Academy in Dover-Foxcroft is being set up for graduation ceremonies set for Saturday morning, June 27. Eighty-five 12-by-12-foot boxes have been painted on the field, each for a graduate and up to four family members in accordance with social distancing standards.

Stitham, whose father Dr. Linus J. Stitham delivered more than 3,000 babies during his 40-plus years of practicing medicine in the area, is a 1968 Foxcroft Academy alumnus.

He graduated from Dartmouth College with a bachelor’s degree in psychology in three years before earning his medical degree from Washington University in St. Louis, Missouri, in 1975.

After serving his residency at Maine Medical Center in Portland, he moved to Hawaii, where he had visited in 1974.

“My dad told me, ‘You don’t like the cold’,” Stitham recalled.

As Stitham began his practice of adult, child and forensic psychiatry in 1980, he also continued to dabble in various media — a side gig of sorts he had begun as a disc jockey at WDME radio in Dover-Foxcroft during the summer before his senior year of high school.

Stitham went on to broadcast at WGUY in Bangor and WDCR while at Dartmouth, then for a 100,000-watt station in St. Louis while pursuing his medical degree.

Stitham turned from radio to television during the late 1980s, with series credits during the next two decades including “Unsolved Mysteries,” “Lost,” “Jake and the Fatman” and “Hawaii Five-0.”

Stitham focuses his psychiatric work these days on forensics involving Workers’ Compensation disability cases while spending summers in Maine — including frequent visits to the Dover-Foxcroft area where his favorite stops include Sebec Lake, Pat’s Dairyland and Butterfield’s Ice Cream.

Stitham also has remained close to his alma mater and regularly attends Foxcroft Academy  alumni events, including his class’s 50th reunion in 2018.

Much of this commencement address has been written for a while, though he has added  thoughts related to the COVID-19 pandemic, economic slowdown and racial tension that have emerged around the country this year.

“Every generation has its own crises to deal with,” he said. “Mom and Dad went through the Great Depression and then ‘Bam,’ there was World War II. Even though I was in the post-War affluence of the Baby Boomers, we had the civil rights movement, the assassinations of the two Kennedys and Martin Luther King Jr., and the Vietnam War.

“Now this generation has theirs, so basically I’m going to give them a hopeful message that Foxcroft Academy has prepared them well.”

Stitham plans to remain in Maine until the end of September before returning to Hawaii, where another quarantine may await him.

“They’ve got a two-week quarantine, too, and I go back Sept. 30 and it may still be in effect,” he said. “It is now, but I think it will be lifted by then or there will be some testing that we can do.”