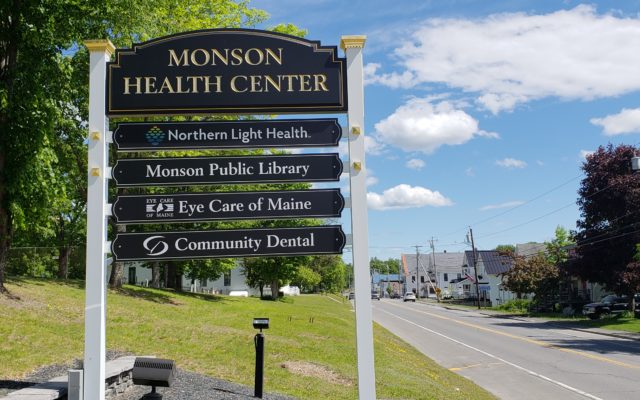 Ernie Clark, Bangor Daily News Staff • June 16, 2020
While creating an arts community along the shore of Lake Hebron has been at the heart of the Libra Foundation’s efforts to revitalize the Monson area, a newly developed health center should serve as an equally important development for the town’s 680 residents. The Monson Health Center, located in the town’s former elementary school, already is home to primary care services for patients of all ages through Northern Light Health, which opened last week.

While creating an arts community along the shore of Lake Hebron has been at the heart of the Libra Foundation’s efforts to revitalize the Monson area, a newly developed health center should serve as an equally important development for the town’s 680 residents.

The Monson Health Center, located in the town’s former elementary school, already is home to primary care services for patients of all ages through Northern Light Health, which opened last week.

Eyecare of Maine and Community Dental are scheduled to open in the same building in July, according to Craig Denekas, chairman and chief executive officer of the Libra Foundation.

Bangor Daily News photo/Ernie Clark
MONSON HEALTH CENTER — Downtown Monson is off in the distance beyond a sign that reflects the Piscataquis County town’s new health center, which will include primary care, eye care and dental services.

The Libra Foundation is a private organization based in Portland that has provided significant financial support to numerous Maine causes since 1989, among them the Maine Winter Sports Center Nordic skiing facilities in Fort Kent and Presque Isle and the Piscataquis County Ice Arena in Dover-Foxcroft.

The foundation has invested more than $10 million to help revitalize Monson during the last few  years, purchasing approximately 30 buildings and a farm and renovating or replacing them while also creating the Monson Arts artists’ residency program and arts center and the new Monson General Store.

“It’s really art and health care — those are the primary two legs of the stool,” said Denekas of Libra’s philanthropic efforts in the Piscataquis County community.

One of the first buildings purchased by the foundation in 2016 was the former elementary school, which became the Monson Arts Center while being used as studio space for visiting artists until the studios were relocated closer to the lake.

That move coincided with discussions that began in January 2018 among Libra officials and health care professionals throughout the region because local medical care for most Monson residents at the time was extremely limited. The need for health care typically required a trip to Northern Light C.A. Dean Hospital in Greenville or Northern Light Mayo Regional Hospital in Dover-Foxcroft.

The Libra Foundation ultimately retrofitted the school building for use as medical offices, then attracted Northern Light Healthcare, Eyecare of Maine and Community Dental to the facility.

“We wanted to create a model with first-class dental care, eye care and primary care under one roof,” Denekas said.

Dr. Peter Bates, a former senior vice president of academic affairs and chief academic officer at Maine Medical Center in Portland, served as a consultant on the project.

“Libra’s choice of Monson, a small town within this large county with an underserved population, is significant — there are many health issues here that are serious and heartbreaking,” said Bates, now interim dean of the Tufts University School of Medicine. “Primary care, dental and eye care were chosen to address specific unmet needs within the community and county.

“These health programs are integrated into those of existing providers like C.A. Dean, Northern Light, Community Dental and Eyecare of Maine to assure continuity for patients and that there is integration across multiple areas of need — health care, economic development, the arts and community engagement.”

The Monson location not only provides more convenient health care access for its residents — Northern Light Health is open Monday through Friday for primary care and laboratory services — it also helps address a paucity of eyecare and dental professionals in rural Maine.

Greenville has one dentist’s office, while the only other dentists in Piscataquis County are more than 20 miles away in Dover-Foxcroft.

“The dental aspect is what I think most people are excited about,” Monson town manager Daniel Swain said. “Not only are there not a lot of dentists around but the ones that are here maybe don’t like to specialize in the rural parts of Maine — so because of where we are to have this type of program here is going to be great.”