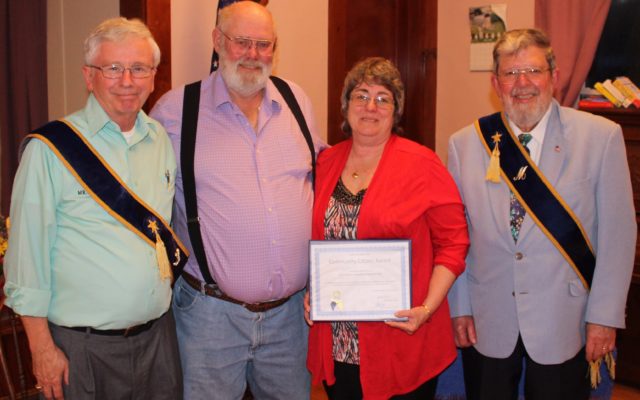 Stuart Hedstrom • June 8, 2020
An area Grange member who has been dedicated to the organization at the local and state levels, served the region in the Maine Legislature and in local government and has given back to the community in many other ways was honored by Piscataquis Pomona -- the local Grange district -- on June 4. Jim Annis of Dover-Foxcroft received the Piscataquis Pomona Award for Public Service as part of the monthly Piscataquis Pomona gathering held at the Valley Grange.

GUILFORD — An area Grange member who has been dedicated to the organization at the local and state levels, served the region in the Maine Legislature and in local government and has given back to the community in many other ways was honored by Piscataquis Pomona — the local Grange district — on June 4. Jim Annis of Dover-Foxcroft received the Piscataquis Pomona Award for Public Service as part of the monthly Piscataquis Pomona gathering held at the Valley Grange.

Piscataquis Pomona Overseer/Maine State Grange Communications Director Walter Boomsma said the honor is being bestowed upon Annis “for personal commitment and involvement as a servant to the public.” He added, “It is a real honor and pleasure to give you this Jim.”

“Jim we all know has been a dutiful public servant and has served in many, many rolls,” Stearns said. He said he worked with Annis on the Piscataquis County Economic Development Council board and Annis always “does the right thing, for the right reason.”

Higgins said he and his wife have sat behind Annis and his wife Mary (a fellow Grange member) at Dover-Foxcroft Congregational Church services for many years. “Jim leads by example, he quietly demonstrates that.

Davis said he and Annis campaigned together in years past and “I say we’re friends for life.”

“Jim worked hard when he was in the Legislature, he was there every day,” Davis said. He said Annis is dedicated “not only to Grange, but to Dover-Foxcroft, Piscataquis County and the State of Maine.”

Annis, who first learned of the award during the pre-meeting supper, is planning to step down as legislative director of the Maine State Grange. This news was announced to those present, who were reminded about some of Annis’ other community endeavors including the Dover-Foxcroft Historical Society and serving as a Piscataquis County commissioner.

Past Maine State Master Steve Verrill said he appointed Annis to the state legislative committee, where he served for about a decade. Verrill said Annis “was a big asset to the committee and if we had any resolutions we needed someone to sponsor them in the Legislature he always took care of that.”

“We want to thank you for all you have done for the Grange and you are not done,” Verrill said.

Mary Annis spoke next and she said, “I am very supportive in all he does going back to when we were first married and he gets involved in the board of education in Wallingford, Connecticut.”

“It’s been fun and we have met a lot of wonderful people along the way,” she added.

“You have been a great master for the Valley Grange and what you have heard tonight is true,” Boomsma said.

“I started off as a PTA president and cub master at the same time and from there it’s just blossomed,” Annis said.

He said after his family moved to Dover-Foxcroft he was asked to run for the Legislature. Following his time in Augusta, Annis said he was asked to serve on the town selectboard and later encouraged to run for a seat on the county commissioners. Annis mentioned he would be 83 by the time his current term as a commissioner comes to an end at the conclusion of the year and had planned to step down from the government seat.

“It’s been a lot of fun,” Annis said. “My father said when you take on a problem you give it 100 percent, you don’t slow down.”