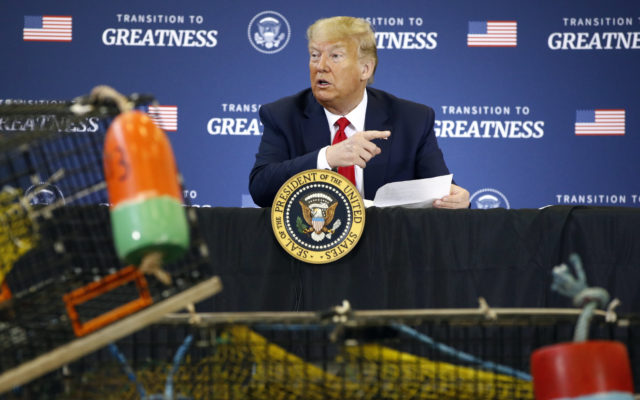 From swabs to fish, more jobs for Maine

Peter Navarro, Special to the Piscataquis Observer • June 6, 2020
More jobs in the factories of Maine. More opportunities for Maine’s commercial fishermen. That’s the good news President Donald Trump brought to Bangor on Friday as he celebrated a dramatic expansion of swab production for COVID-19 testing in Guilford and signed a proclamation reopening the Northeast Canyons and Seamounts area to commercial fishing.

More jobs in the factories of Maine. More opportunities for Maine’s commercial fishermen. That’s the good news President Donald Trump brought to Bangor on Friday as he celebrated a dramatic expansion of swab production for COVID-19 testing in Guilford and signed a proclamation reopening the Northeast Canyons and Seamounts area to commercial fishing.

The new factory jobs coming to Maine will be spread across the state from Guilford and Bangor to Bath and Brunswick. On America’s swift march to become the coronavirus testing capital of the world, Puritan Medical Products has been awarded a $75 million contract under the auspices of the Defense Production Act to dramatically increase its production of cotton swabs.

Puritan — a family-run company more than 100 years old — is already the largest producer of testing swabs in America. With this new contract, Puritan will first double production to 20 million swabs a month and then double that again to 40 million swabs.

To meet these production targets, Puritan has already added 200 new employees with full benefits to its team. As a spanking new 95,000 square foot factory in Pittsfield comes alive, Puritan will also be hiring an additional 150 Maine workers.

There is a more interesting story here that speaks to the power of the DPA to help recruit and repurpose America’s manufacturing might in the war against the China virus. This story involves one of the sturdiest anchors of the Maine economy, Bath Iron Works.

Under the Defense Production Act, this General Dynamics facility will provide 30 specialized machines that will allow Puritan to quickly and efficiently manufacture and package its swabs. General Dynamics will manufacture these machines by mobilizing its machine shops, outfit fabrication facilities, supply chains and experienced workforce.

Writ large for the United States, this cooperative effort between Puritan and Bath Iron Works will help contribute to the greatest industrial mobilization of the American economy since the Korean War. For Maine, this effort means more jobs in both Bath and Brunswick, as well as an important opportunity for Mainers to contribute to the war against an enemy virus that began in China, one of the deadliest enemies this country has ever faced.

It’s not just more factory jobs that New England can look forward to. On Friday, Trump also signed a proclamation that will reopen a one part of one of the most fertile fishing grounds in the world — the fecund waters that stretch to and through Georges Bank out to the limits of America’s 200-mile offshore exclusive economic zone.

In 2016, under the previous administration, fishermen and lobstermen were informed that the nearly 5,000 square miles of the Northeast Canyons and Seamounts area would be closed by presidential proclamation to commercial fishing. This was done without adequate justification, and it was an action taken by Washington elites that struck right at the heart of New England’s hard-scrabble commercial fishing and lobster industries.

With the stroke of a pen, Trump is righting this wrong. With a similar stroke of the pen, Trump recently signed an executive order on Promoting American Seafood Competitiveness and Economic Growth that will also benefit New England’s commercial fishing industry. This order will remove unnecessary restrictions on the American fishing industry even as it will combat illegal, unreported and unregulated fishing. Foreign vessels from China and elsewhere should not be allowed to take away the livelihoods of American commercial fishermen.

Peter Navarro is the White House Director of Trade and Manufacturing Policy.