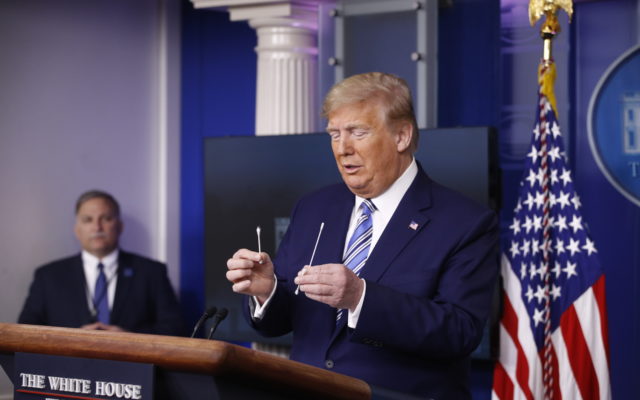 President Trump, now is not the time to be in Maine

BDN Editorial Board, Special to the Piscataquis Observer • June 4, 2020
As anti-racism protests grow across the country and coronavirus continues to spread, a presidential visit to Maine on Friday feels misplaced. Worse, it has the potential to spread dangerous violence -- and the deadly virus -- to rural Maine while taking precious financial resources away from local and state agencies that need them to serve their citizens. President Donald Trump is headed to Guilford anyway. Here is our message to our president. You should not be coming here. Not now.

As anti-racism protests grow across the country and coronavirus continues to spread, a presidential visit to Maine on Friday feels misplaced. Worse, it has the potential to spread dangerous violence — and the deadly virus — to rural Maine while taking precious financial resources away from local and state agencies that need them to serve their citizens.

President Donald Trump is headed to Guilford anyway. Here is our message to our president.

You should not be coming here. Not now.

Far more people have died from coronavirus in America than in other countries. Hundreds of people continue to die daily from the virus.

More than 40 million Americans are out of work. The unemployment rate is the highest it has been since the Great Depression. Businesses are struggling under government restrictions and reduced customer demand.

States, tribes and municipalities aren’t able to balance their budgets as the costs of addressing the pandemic mount while revenues have shrunk. A visit to rural Maine will further stress these budgets as state and community law enforcement must be deployed to protect you at all the various points in your journey through Maine.

Millions of people have taken to the streets in cities across the country to peacefully call for an end to police brutality, which ends the lives of far too many Americans — a disproportionate number of them people of color — each year. Some protests have turned violent, diluting the calls for equality and justice and threatening the vitality of community businesses.

All of these issues — and more — demand your attention. America is in chaos. It needs a leader who is empathetic and understanding, who sees that the way to heal generations of division and distrust is through compassion and cooperation, not through talk of law and order, and worse, threats of violence and domestic militarization, and actual police violence against your fellow Americans.

Your attention needs to be on policies and actions that can help America heal, not on exploiting political divisions.

Maine has long welcomed presidents and their families, offering a place for respite, reflection and relaxation.

But, now is not the time for these activities, and that is not why you are coming to the Pine Tree State. Based on your comments earlier this week, it seems you’re coming with hopes of seeing cheering crowds and hearing chants of support.

Now is not the time for this type of politicking. Sen. Susan Collins, a Republican up for re-election this year, will remain in Washington, rather than join you in Maine, according to her staff.

The support and empathy from a president are needed in the hearts of broken communities, like Minneapolis and Louisville. Heading to a manufacturing plant in a remote part of the whitest state in the country does not look like leadership. Frankly, it looks like hiding out.

Our criticism of this visit should in no way diminish the important work being done at Puritan Medical Products, one of the largest makers of the swabs used in some coronavirus tests. The Guilford plant’s workers deserve thanks and recognition for the job they’re doing to help the entire country in its coronavirus response. However, we can’t help but feel like you’re using them as props for a photo op or campaign video. They, and the country, deserve better in this moment. The same is true of the fishermen you are also scheduled to meet with.

Pleas from Gov. Janet Mills to not come to Maine, not now, were not meant as a challenge or a joke. Treating them as such shows how out of touch you are with the reality of America today. The governor is rightly worried about security — yours as well as that of the people of Guilford, Piscataquis County and all of Maine.

Maine is not immune from the bigotry that has led to riots across the country, and in several communities here. Protests are planned around your president’s visit. Your supporters will also gather in Guilford and Bangor. Unfortunately, some of those supporters have already threatened violence.

Your visit to Maine, as a recent BDN headline put it, will be “expensive and complicated.” It is also not necessary.

But, since you are coming anyway, we entreat you to rise to the challenge of the duties and responsibilities you swore to uphold in January 2017. You are the president of all Americans — including those who are sick with coronavirus or fearful they will get it, those who are out of work, those who daily fear that a police interaction could turn deadly, those who are marching for a more equitable America and those who will eagerly greet you in Maine.

All Americans deserve a president who will hear their concerns and will work with them to make America a country that lives up to its promises of equity and justice, for all.