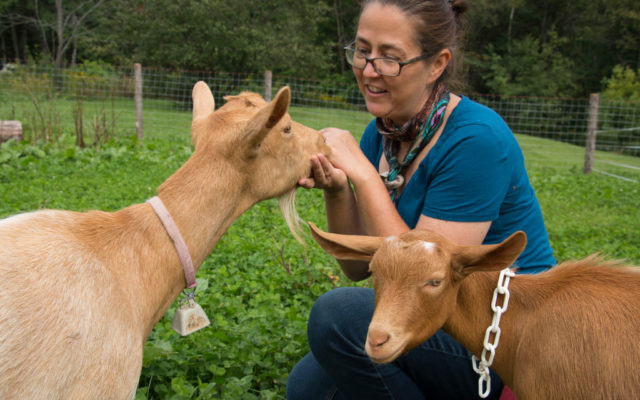 There’s nothing quite like sipping a cold craft beer, enjoying a soft homemade pretzel and watching goats play.

To make this magical combination possible, Turning Page Farm — a homestead, goat creamery and small-batch brewery in Monson — recently opened a beer garden right outside one of their goat pastures. Open from 11 a.m. to 6 p.m. Sundays and Mondays through the end of October, this low-key venue has already attracted locals and vacationers who are seeking a memorable drink.

“What we want is for people to come and experience the farm in all ways, shapes and forms, and beer is a way to bring people in,” said Tim Bueschen, who owns and runs the farm with his wife, Joy Bueschen. “So far, everybody that comes will have one, maybe two beers, and will sit here and chat, maybe meet some new friends, and that’s what we’re looking for.”

Under a large white canvas tent, visitors sit on long picnic tables just a few feet from the pasture’s tall fence, where curious goats will approach to poke their soft noses through the wire mesh. With long ears, wide eyes, and a tendency to nibble and climb, these little animals are known to have a calming, therapeutic effect on many people.

Nearby, the farm store is open during the same hours, offering a variety of goat cheeses and soaps made on site, as well as premium pork from the farm’s heritage forest-raised pigs. And if you enjoy the farm’s pale ale or red ale, you can purchase a growler to take home.

“I think everybody who comes is enjoying themselves, and that’s kind of the measure of success we’re using right now,” Joy Bueschen said.

Originally from Ohio, the Bueschens have a story that, while seemingly bizarre, mirrors the stories of many other homesteaders in the state.

Climbing the corporate ladder, the couple have traveled and lived in several states and countries. Most recently, they lived in Munich, Germany, for eight years working for various companies in sales and supply chain operations. And when life got crazy, they dreamed of living in the country, raising goats, making cheese and brewing beer.

A studious lover of books, Joy Bueschen buckled down and researched all things goats, then found a tour in Ireland where she milked goats for the first time. And eventually, she and her husband decided it was time to make the leap and pursue their dream of living a simpler, more sustainable life in the country.

“You become disenchanted with what’s going on [in the corporate world],” Joy Bueschen said. “Every year it’s a different strategy, and you don’t really see all the output of all the work you’re putting into it.”

On the farm, things are different.

Three young male goats enjoy a sunny day in their fenced-in pasture at Turning Page Farm in Monson, a new homestead that includes a small goat creamery and a small-batch brewery. The young male goats are currently for sale. (Aislinn Sarnacki | BDN)

“It’s really hard work, that’s for sure,” Joy Bueschen said of farm life. “But at the end of the day, you have something to show for it. We have freezers full of meat at the end of the year, and we have cheese all summer long. So you see the output of all the hard work.”

They purchased the 1850s farm in Monson sight unseen and moved to it in April 2016. Prior to that, Joy Bueschen had been to Maine once, and Tim Bueschen had never stepped foot in the state. But they wanted to live somewhere new, somewhere with seasons, and the price was right.

On Turning Page Farm, they were starting a new chapter of their lives, and right away, their resolve was tested with tragedy. That March, a fire destroyed their barn and first goat herd.

“I didn’t have a plan B,” Joy Bueschen said, “so I couldn’t think of what else we’d do, which probably saved us.”

That summer, they rebuilt the barn. That fall, they pieced together another small goat herd. And that winter, their herd gave birth to seven kids.

“We had to start all over again,” Tim Bueschen said. “We took quite a few steps back and to get everything back to where we could start getting the enterprises going, which was the goal, it took a lot of work, but we’re kind of stubborn like that.”

Still in its infancy, their homestead now includes a flock of meat chickens, laying hens, a couple ducks, beehives, heritage breed pigs and an herb garden. And in addition to goat stalls, the barn features the required room and equipment for producing food and beer for the market.

The Bueschens each have their own passions. For Joy Bueschen, it’s the goats, which she milks two times a day to make cheese and goat milk soap. Her cheese line includes feta marinated in rosemary, basil and garlic, along with four types of chevre: plain, garlic and herb, blueberry and jalapeno, and horseradish and dill. And this fall, she’s launching a line of goat cheese salad dressing. She sells these cheeses — along with her homemade goat milk soaps — at Monson General Store in Monson, Spruce Mill Farm & Kitchen in Dover-Foxcroft and Blair Hill Inn in Greenville.

“I’m selling a lot more with the beer garden, too,” she said, “which is exactly what we wanted, to bring people to the farm, then they can buy directly from us.”

Meanwhile, Tim Bueschen focuses on brewing, using the skills and knowledge he gained while working with a group of microbrewers in Germany. To date, he’s developed a pale ale and a red ale, which he sells on the farm and to The Lakeshore House Lodge and Pub in downtown Monson.

The couple said that they’ve found their small community to be welcoming and supportive. Already, they’re active members of the Maine Cheese Guild and the Maine Brewers’ Guild. They attend events at the East Sangerville Grange. And they’ve participated in the Maine Organic Farmers and Gardeners Association Journeyperson Farm Training Program and Farm Beginnings program.

They’ve also attended Goat School, a two-day program that provides hands-on training for anyone interested in owning goats. At the time, the school was run on a farm in Albion, but after the Bueschens graduated from the program, they purchased the school from the retiring owners and brought it to Turning Page Farm, where they plan to offer it twice a year in spring and fall.

“When [the Goat School owners] retired, I said OK, this is kind of perfect,” Joy Bueschen said. “They helped mentor me, so we took over that business and will do the same for others.”

This fall, Goat School is being held Oct. 13 to 14, with an extra day on Oct. 15 for cheese- and soap-making classes, and slots are still open. Turning Page Farm also runs cheese-making and soap-making classes throughout the year, and they participate in statewide Open Farm Day held each July and the statewide Open Creamery Day, this year scheduled for Sunday, Oct. 7.

For more information about Turning Page Farm and their events, visit www.turningpagefarm.com, call the farm at 207-997-3424.