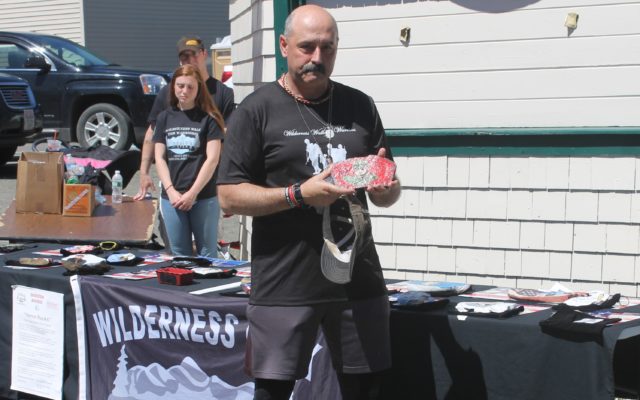 Stuart Hedstrom • July 10, 2018
For the fifth consecutive year a contingent -is hiking approximately 120 miles over a week and a half from downtown Monson to the summit of Mount Katahdin through the 100-Mile Wilderness along the northernmost section of the Appalachian Trail to raise funds through pledges. This year’s “Honor Rocks” hike supports the Wilderness Walk for Warriors, an organization that raises money for Maine veterans and service members and their families and honors the nation’s fallen heroes through a motto of “Assisting the Living, Honoring the Deceased.”

MONSON — For the fifth consecutive year a contingent — the 2018 group is comprised of nine members — is hiking approximately 120 miles over a week and a half from downtown Monson to the summit of Mount Katahdin through the 100-Mile Wilderness along the northernmost section of the Appalachian Trail to raise funds through pledges. This year’s “Honor Rocks” hike supports the Wilderness Walk for Warriors, an organization that raises money for Maine veterans and service members and their families and honors the nation’s fallen heroes through a motto of “Assisting the Living, Honoring the Deceased.”

During the late morning of Saturday, July 7 members of the Wilderness Walk for Warriors team departed Bangor by the Army Aviation Support Facility on Florida Avenue for a 60-mile ride to Monson, escorted by the Patriot Riders of America, Penobscot Valley 4-Wheel Drive organization, Downeast Emergency Management Institute and others.

As 1 p.m. neared the roar of motorcycles could be heard in town as the procession arrived. Following a barbecue served by Monson’s American Legion Post 116 and music by the band Recon, those present gathered by the gazebo to hear from Wilderness Walk for Warriors founder Chris Robinson of Houlton.

“This is the fifth year (his brother) Tim and I have gone through the 100-Mile Wilderness,” Robinson said. “It’s a test but it’s worth it.”

He said the inspiration for the 2018 hike theme came from Facebook, as Robinson said he learned about a program called “Houlton Rocks” with stones painted with scenes for Easter, Christmas and other events. “I contacted the artists in this group, and my idea was who could paint service members on the rocks?”

Houlton Rocks artists were more than happy to take part and Robinson said the portraits and names of fallen service members and first-responders were painted onto stones.

“The common theme among all these rocks is they put on a uniform,” he said. “They all perished but we are going to honor them.” He said Wilderness Walk for Warriors hikes will carry the stones with them along the Appalachian Trail, with some participants having more than one stone in their possession.

He then read the names of each stone, including U.S. Marine Corps Cpl. Devon Strout of Milo and U.S. Army Capt. John “Jay” Brainard of Atkinson. “These are the heroes we are honoring this year,” Robinson said.

“Tim, this is your Honor Rock to carry,” he said, unveiling an honor rock for Leon Robinson.

“Tim I want this to be near and dear to your heart because I know you and Chris and Dad had a bond together as a family,” Bonnie Robinson said.

For the second year in a row, Penobscot Valley 4-Wheel Drive presented a $500 donation to Wilderness Walk for Warriors.

After the check presentation, Rep. Paul Stearns, R-Guilford concluded the program. “I would just like to thank each and everyone one of you,” he said. “It’s a huge group of people that have the backs of our veterans.”

Stearns said many who have served have visible wounds and many others have not so visible wounds. He said he recently sat in on an American Legion meeting at the Greenville post and was amazed at hearing all the names, including family members, who are being helped by the organization and he knows there are many others with similar missions.

Observer photo/Stuart Hedstrom
HONOR ROCKS HIKE — Wilderness Walk for Warriors founder Chris Robinson shows one of the Honor Rocks, painted with the portrait and name of a fallen member of the armed forces or a first-responder, during the kickoff event for the annual hike on July 7 in Monson. A group departed from Monson on Saturday afternoon to begin their journey north along the Appalachian Trail to the summit of Mount Katahdin in the fifth annual Wilderness Walk for Warriors event, which raises funds for Maine veterans and service members and their families.

Observer photo/Stuart Hedstrom
MEMORIAL STONE — Wilderness Walk for Warriors Chris Robinson, left, and his mother Bonnie unveiled a special Honor Rock for his brother and organization co-founder Tim Robinson on July 7 during the opening ceremony for the fifth annual Walk for Warriors. The stone honors the Robinson’s father U.S. Army veteran Leon as Tim Robinson will carry it with him north to the summit of Mount Katahdin.

Observer photo/Stuart Hedstrom
MOTORCYCLE ESCORT — The 2018 Wilderness Walk for Warriors “Miles of Memories Hike” participants traveled with a motorcycle escort from Bangor to Monson on July 7. From the Monson the hikers are walking nearly 120 miles to the Summit of Mount Katahdin to honor fallen members of the military while raising monies for various veteran programs.