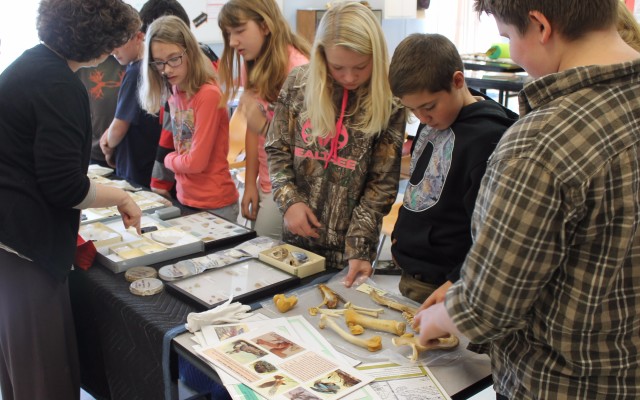 “Our students have been reading ‘Lizzie Bright and the Buckminster Boy’ so we asked the Maine State Museum to come and have actual items from the island,” grade 7 English/language arts teacher Tiffany Dever said. The historical fiction novel by Gary Schmidt is based on real-life events of 1911-12 when the state forcibly evicted residents of  Malaga Island, off the coast of Phippsburg, and razed their homes.

Grade 7 students were split into three groups to rotate between a trio of sessions, Dever said as the pupils took turns hearing from Maine State Museum Chief Educator Joanna Torow in the science classroom and taking part in activities related to the novel during the other two sessions.

Dever said Torow has a number of artifacts from Malaga Island to show what life was like over a century ago. Dever said the near 50-acre body of land is now uninhabited and is managed by the Maine Coast Heritage Trust.

As one of the three groups took their seats Torow stood before the students with a table covered in various objects, broken pieces of various materials, papers with writings and photographs. “We can hope that you will look at these objects and learn a little more, like a historian, to learn what life was like in the 1880s and 1890s and then the 1900s,” Torow said.

She then passed out various fragments of broken objects to each seventh-grader. Torow said what the students were holding were relics exhumed over the last eight years by a team from the University of Southern Maine excavating at Malaga Island.

“How do these fragments fit together to tell the story of how people lived?,” Torow asked the students to think about.

The Maine State Museum chief educator then had the seventh-graders describe the difference between primary and secondary sources — which they had learned about during Dever’s unit on the the novel.

“We can take all these pieces of evidence and make interpretations,” Torow said. She had the students think about what the objects in their hands are made of and who might have made the items and for what purpose. The students were able to conclude that they were looking at pieces of milk bottles, casserole dishes and tea cups.

“This type of work that you’re doing, piecing things together with fragments is what archaeologists do,” Torow said. “Fitting those pieces together to tell a bigger story.”

DIGGING INTO THE PAST — SeDoMoCha Middle School seventh-graders, from left, Dahlia Sharrow, Ruby Rideout, Kiya Cook, Benjamin Martin and Gabe Brawn examine items from Malaga Island with Maine State Museum Chief Educator Joanna Torow on Nov. 7. The students studied the historical fiction novel “Lizzie Bright and the Buckminster Boy,” which is based upon the state’s eviction of island residents in the early 20th century.