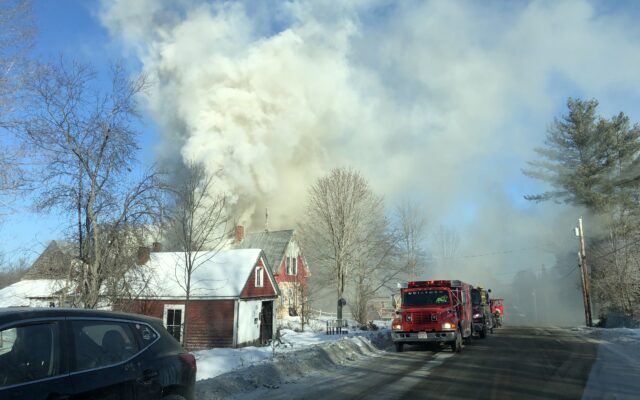 Valerie Royzman • January 13, 2022
ABBOT — An old two-story farmhouse in Abbot was destroyed when an indoor wood stove sparked a fire that enveloped the structure Tuesday afternoon. The homeowner called the Piscataquis County Sheriff’s Office after 1 p.

The homeowner called the Piscataquis County Sheriff’s Office after 1 p.m. and reported smoke coming from the floor, Guilford Fire Chief Jeff Libby said. Firefighters arrived within about 10 minutes, along with other area crews, he said.

No injuries were reported, though some of the family’s animals died in the fire. The homeowner’s children were not home when the fire started in the West Road house, which was likely built in the late 1800s or early 1900s.

When crews first arrived, no smoke was visible, Libby said. After firefighters stepped inside, they noticed a small amount of smoke coming from the first-floor ceiling. One of the family’s wood stoves had a pipe going through the wall, where the fire was growing and spreading into rafters in the ceiling. There was also a fire near the chimney.

“The minute we opened the wall, the whole place went up,” the chief said. “It went from something that we thought we could put out and didn’t look too bad and escalated into a full structure fire.”

By the time crews were done battling the blaze in subzero temperatures, nothing was salvageable, Libby said.

House fires this destructive, where an excavator is needed to pull the metal roof off the structure, are uncommon, Libby said. In his 21 years working in fire services, this was one of two fires where the air horn was blown, signaling that the chief sees something dangerous and firefighters and anyone else inside need to exit the structure immediately.

The chief called the fire a “classic backdraft situation,” where air is suddenly introduced into a fire that has depleted most of the available oxygen in a space. The situation had everything it needed — heat, fuel and oxygen — to erupt into a full-fledged fire, he said.

With hoses and other equipment freezing in extreme weather conditions, and fewer people signing up to volunteer or work for local fire departments, “our mutual aid system is invaluable at this point,” Libby said.

Jaeme Duggan, Piscataquis County Emergency Management Agency director, helped connect the family to the Red Cross. A firefighter from one of the area departments owns a farm and offered to foster some of the family’s animals, Duggan said. The family had dogs, cats, goats and other barn animals, but she couldn’t say how many survived the fire.

“It’s horrible that they lost everything they own. … On a day like yesterday, with the wind pushing the fire as far as it went, it was wonderful that there were no injuries,” she said.

Several GoFundMe pages have been set up to aid the family, Libby said.