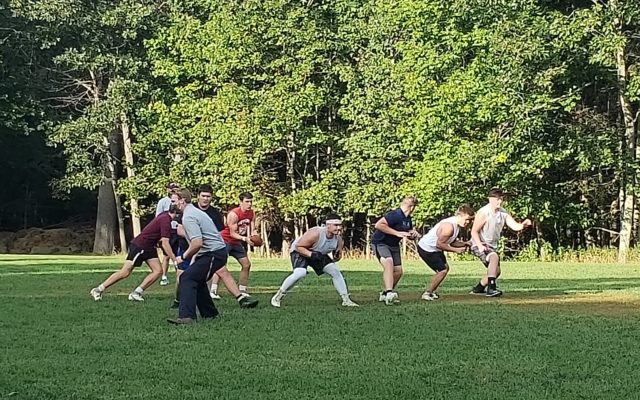 Ernie Clark, Bangor Daily News Staff • September 16, 2020
DOVER-FOXCROFT — The practice fields surrounding Foxcroft Academy were busy Monday as the school’s fall sports teams began tryouts.   And while the stakes won’t be quite the same for the Ponies this season, with no traditional football and no postseason play for the field hockey and soccer programs, that’s a lament for another day.

And while the stakes won’t be quite the same for the Ponies this season, with no traditional football and no postseason play for the field hockey and soccer programs, that’s a lament for another day.

For now, the mere chance to play is the ultimate prize. 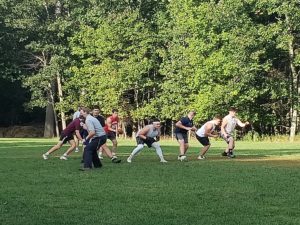 Members of the Foxcroft Academy football team run their offense during the first day of preseason practices on Monday. (Ernie Clark/BDN)

“It’s incredibly exhilarating. I can’t express how happy I am that they’ve allowed us to have a season and for me to be on this field with these girls. It’s really amazing,” said Sheryl Chase, a senior on Foxcroft’s 2019 Class C state champion field hockey team.

“There were a lot of ups and downs during the summer, and it was just a struggle to get through it. But everybody’s just crazy excited to be here now. You can definitely tell that everybody’s happy,” she said.

Like their peers around the state, Foxcroft’s student-athletes have endured months without competition since the shutdown of the spring sports season  in mid-March after the COVID-19 pandemic arrived in the United States. 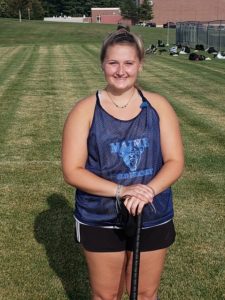 That unscheduled break also included a brief shutdown of the school’s summer conditioning program after two student-athletes tested positive for the coronavirus.

The loss of spring sports denied Foxcroft senior soccer player Ainsley Ade her chance to play tennis and travel soccer. The latter would have been a chance to boost her hopes of playing that sport collegiately.

But as she and her soccer teammates gathered — at an appropriate social distance — for their first formal practice this week, any energy absorbed by frustration was being redirected toward the competition ahead. 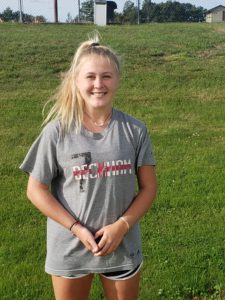 “Just getting out here and playing means the world to me,” Ade said.

While the Maine Principals’ Association and various state agencies reached agreement last week on COVID-19-related safety guidelines that allow for interscholastic competition in all fall sports except football and volleyball, decisions continue to be made locally.

Camden Hills of Rockport, which last month announced it was opting out of the fall sports season, has since reinstated cross country and golf while limiting football, field hockey, soccer and mountain biking to intrasquad workouts. 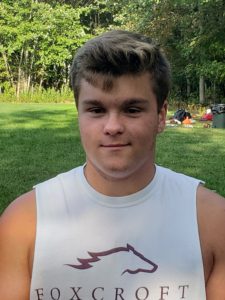 Deer Isle-Stonington has reinstated its soccer program after initially declaring it would not field teams in that sport.

Bangor High School has not yet begun formal practices, with a special school committee meeting scheduled for 7 p.m. Thursday to consider approval of a fall sports plan. 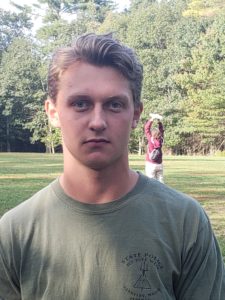 The Ponies’ football team practiced on the other side of campus Monday knowing its best chance for a typical season of sorts rests in a possible move from fall to next spring.

Plans are in the works for 7-on-7 games against regional competition this fall, but it won’t be quite the same.

“It’s still not as good as playing real games in pads and hitting people, but we’ll take whatever football we can get at this point,” said Foxcroft senior Noah Lamb, who plays offensive guard and defensive end.

Despite football being labeled a high-risk sport, Lamb and his teammates had reason to think they might have a chance to play 11-player tackle football on Oakes Field this season after the MPA originally approved the sport for competition.

But support for football and volleyball — the only indoor fall sport — was overturned after state agencies reviewed the MPA’s safety plan.

“Not getting an answer on whether we were going to have football or not was weird but we were coming [to conditioning workouts] with the mindset that we’re going to have football,” Foxcroft senior wide receiver and cornerback Luke Stedman said. “Of course, when we were told it was going to be pushed to spring we were all pretty disappointed.”

Players on other Foxcroft teams are sympathetic to their friends on the gridiron. Chase’s younger brother Cameron is on the football squad.

“He’s taking it better than expected,” she said. “I know a lot of my other friends aren’t taking it that well, but it’s definitely a hard thing to hear, not having a season. I’m just lucky we have a season.”