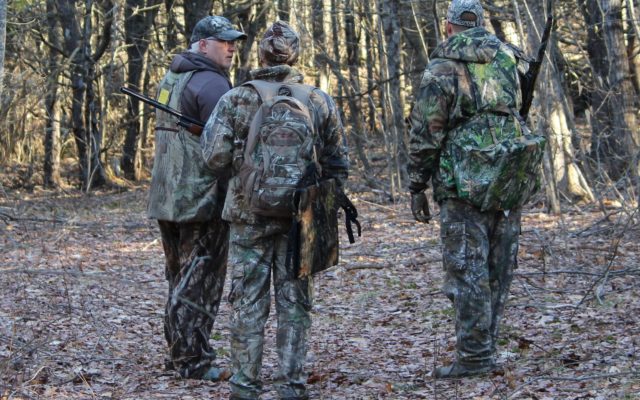 John Holyoke, Bangor Daily News Outdoors Editor • September 15, 2020
In the springtime, as many as 18,000 hunters in Maine take part in a thrilling turkey hunt that involves trying to call in lovesick male turkeys during the mating season.   But that’s not the only opportunity for turkey hunting.

In the springtime, as many as 18,000 hunters in Maine take part in a thrilling turkey hunt that involves trying to call in lovesick male turkeys during the mating season.

But that’s not the only opportunity for turkey hunting. Maine has a fall turkey hunting season, too — it opened on Sept. 14 and runs until Nov. 7 — though it has never caught on at the same level.

It might be the best Maine hunting season you’ve never heard of.

While spring turkey season is a harbinger of warmer days and welcomes many hunters back after a winter without hunting, the fall season overlaps with the popular upland bird season, archery deer season, part of bear season, moose season and the opening of the firearms season for deer. It doesn’t get the same attention.

The methods used during the fall season are also different, and hunters aren’t rewarded with the heart-stopping gobble of an approaching male turkey like they are when the mating season is in full swing in the springtime.

Kelsey Sullivan, game bird biologist for the Maine Department of Inland Fisheries and Wildlife, doesn’t actively pursue turkeys in the fall, said those who do have told him that finding a flock of turkeys is the first step.

“Some of the guys use dogs, where they find flocks and break them up, basically,” Sullivan said. “You come into an area where you know there are birds, you break the flock up, and then you set up where they dispersed from, and then make calls to draw them back. They want to come back together again.”

Sullivan said that the department hoped an increase in fall participation would help biologists reach management goals by stabilizing the turkey population in certain parts of the state. Thus far, that hasn’t been the case though the number of hunters is on the rise.

Sullivan thinks there may be as many as 5,000 fall turkey hunters now, compared with 3,500 a few years ago.

The season also has been extended: a turkey permit now covers spring and fall seasons, and the bag limits in much of Maine have increased.

But many of those fall turkey hunters are simply “opportunistic” hunters who are actually in the woods looking for other game, like ruffed grouse and woodcock, Sullivan said.

“They’re not all diehard turkey hunters, but they might take a bird because an opportunity presents itself,” Sullivan said.

Sullivan said that data gathered in the spring of 2019 indicates that Maine’s turkey population was about 70,000, before the nesting season. By September, when that year’s newly hatched birds were on the landscape, the population had likely swelled to 140,000, he said, before naturally trending down as birds died or were killed during the fall and winter.

“The harvest is still fairly low, and it’s still not a major tool in keeping those numbers down,” Sullivan said.

If you do go turkey hunting this year, you will need to get your turkey tagged. Due to the COVID-19 outbreak, in-person tagging for turkeys was discontinued for the spring season. Tagging stations are now open again, and hunters must register the turkeys they shoot.

While the concept of fall turkey hunting is pretty simple, the framework explaining where you can hunt and how many birds you’re allowed to take gets complicated, and deserves explanation.

First, there is no fall turkey season at all in parts of the state, including extreme northern Maine, where there aren’t as many birds as in other spots. The Wildlife Management Districts where no fall turkey hunting is allowed: 1 through 5, and 7 through 9.

In zones where there is a fall season, it began with Youth Turkey Day on Sept. 12 and runs until Nov. 7 (excluding Sundays).

Hunters are only allowed to take two turkeys per day during the season. The bird may be a male or a female.