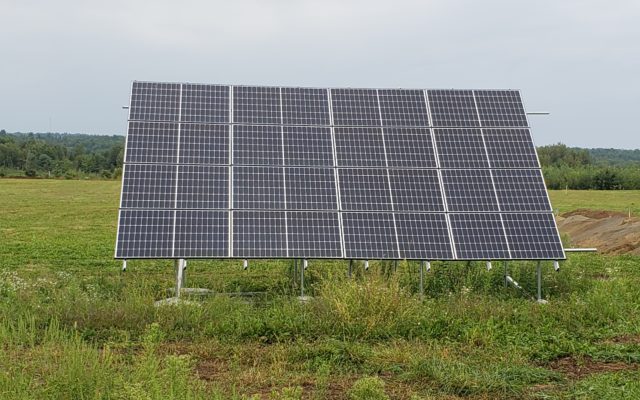 Ernie Clark, Bangor Daily News Staff • August 30, 2020
MILO — Construction of a large solar farm is under way at the Eastern Piscataquis Business Park in Milo.   When it’s completed, the site will feature 67,000 solar panels on land located just north of downtown off Route 11.

MILO — Construction of a large solar farm is under way at the Eastern Piscataquis Business Park in Milo.

When it’s completed, the site will feature 67,000 solar panels on land located just north of downtown off Route 11.

The project has been in the works for several years, according to Peter Hamlin, chair of the Milo select board. He said the town will benefit through lease payments it receives for use of the land and a percentage of the money earned by the sale of electricity. 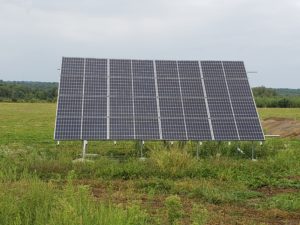 “It seems like this is a marriage made in heaven, a large-scale operation where we don’t have to be landlords chasing people in business parks,” Hamlin said. “Manufacturing’s a real tough sell up here, but there are a lot of good things to look at with this from the town’s point of view.”

When the solar array becomes operational early next year, it will produce enough energy for 5,430 homes, according to developers.

“At the time we were awarded the contract, the size of this project would have just about surpassed the amount of solar in the state of Maine at the time,” said Nick Mazuroski, director of BNRG Maine.

BNRG Maine is an offshoot of BNRG Renewables, a Dublin, Ireland-based solar developer and co-development partner on the Milo project with Dirigo Solar of Portland. BNRG purchased the Milo project last December.

“Now alongside us there are larger developments in Farmington, Sanford and the Benton area, but we will be one of the largest in the state, for sure,” Mazuroski said.

Within six months after Dirigo Solar was founded in 2015, it was awarded a long-term contract from the Public Utilities Commission to develop and sell solar power at 3.4 cents per kilowatt hour.

That compares with the cost of approximately 7 cents per kilowatt hour paid by residential customers in Maine to power distributors like Versant and Central Maine Power.

“We started the company when it became evident to us that the economics of solar finally made sense for the state of Maine,” said Mazuroski, a Portland native and Bates College graduate. “The decline in technology costs, a federal tax credit and the energy market conditions of New England finally made solar look compelling in the state.”

BNRG Renewables and Dirigo Solar have 10 projects under way or scheduled for construction in eight Maine communities. Auburn and Hancock will have two sites each, with Augusta, Fairfield, Milo, Oxford, Palmyra and Winslow as the other host communities.

“The PUC when they awarded us the contract said the entire portfolio should save Maine ratepayers more than $25 million over a 20-year term,” Mazuroski said. “I think we’ll do that a lot sooner.”

A $26 million investment is planned in the Milo solar farm, which is expected to produce 26.4 megawatts of direct current that ultimately will be transformed into 20 megawatts of alternating current to be sold to consumers.

Approximately 170 workers are expected to be involved in the construction process.

“Milo was one of the first projects that came to us,” Mazuroski said. “We had learned about the opportunity with the land at the business park early in our development process, engaged really closely with the town, shared with them the contract we had been awarded and the economics of solar and what that looked like to a landowner.

“The town was incredibly supportive.”

The developers soon entered an option to lease a little more than 60 acres of town land and approximately 50 acres from an abutting landowner, Mazuroski said.

Subsequent preliminary work involved acquiring required permits and applying to ISO-New England for the right to connect the project to the electrical grid, which was approved late last year.

Since then the developers and the town have entered into a formal lease for the industrial park land, and installation work is under way on a racking system to hold the solar panels.

“We’re happy to see it started,” Hamlin said. “They’ve got a lot of money tied up so they’re not going to waste any time getting it online, that’s for sure.”

Of considerable importance to the company is the ability to site its solar arrays near the electrical grid — and that distance from Milo’s industrial park is less than one mile.

“What made this really attractive was the grid infrastructure — the three-phase line that goes by the site and a substation being in close proximity and it being a substation that could take 20 megawatts of solar,” Mazuroski said.

The power produced from the farm is then sold to Versant and that lowers the amount of electricity that Versant has to go to market for each year.

“It’s going to directly benefit Maine homeowners, ratepayers, anyone that uses the standard-offer program in the state,” Mazuroski said.

The flat, open field where the solar farm will be located provides clear access to the available sunlight at its location, which is 45.23 degrees north latitude, or near the midpoint between the Equator and North Pole.

“To be up here with a clear blue sky from January through April is pretty good for them,” Hamlin said. “We can generate a significant amount of power, more than you would think for this northern latitude.”

That’s because the use of fixed-tilt, bifacial solar panels will enable the solar farm to generate electricity from both the front and back of each panel — even during the winter.

Mazuroski said the bifacial panels result in a boost of 10 to 30 percent of solar energy because the sun reflects off the snow and generates electricity from the back side of the panel.

The tops of the solar panels will be no more than 8 feet off the ground.

“Solar is low to the ground so you can’t see it, and there’s no moving parts,” Mazuroski said. “You put up a vegetative buffer and then you really can’t see it because a basketball hoop is taller [than the panels].

“And it doesn’t make any noise or emit anything, so it’s really a win-win.”