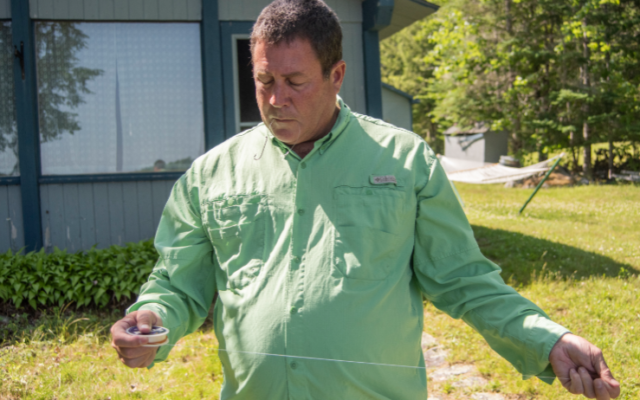 How to rig up your fly rod

John Holyoke, Bangor Daily News Outdoors Editor • July 26, 2020
When I started fly fishing, I knew less than nothing about the sport, and everything about it made me nervous   I didn’t want to make a fool out of myself, and didn’t know who to ask for help. Luckily, I found a few fly fishers I could trust, and who walked me through even the most basic of tasks.

When I started fly fishing, I knew less than nothing about the sport, and everything about it made me nervous

I didn’t want to make a fool out of myself, and didn’t know who to ask for help. Luckily, I found a few fly fishers I could trust, and who walked me through even the most basic of tasks. Today, I’ll share one of those early lessons in hopes that a few nervous first-timers learn something new and avoid making mistakes that could damage expensive gear.

One thing that’s second nature for experienced fly anglers, but might deserve some explaining to beginners: After I attach the reel to the rod, is there an advisable way to thread the line through those metal hoops? 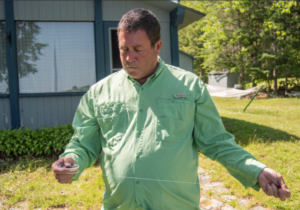 Yes, there is. First, though, those “metal hoops” are actually called “guides.” It’s important that you know that. There are registered Maine guides who take you fishing and tell you where to cast, but these guides are different. They’re just rounded pieces of metal attached to your rod that keep your fly line in a straight line.

Now, make sure your reel is on the rod in the proper direction, with the line feeding off the top of the reel, rather than the bottom.

Next (especially if you’re streamside, standing in sandy soil or gravel), take off your hat, put it on the ground, and put the reel end of your rod into it.

You’re not wearing a hat? Of course you are! You’re fly fishing, and you’d much rather have an errant fly smack you in the hat than embed itself in your scalp. Trust me.

Why put your reel and butt end of the rod in your hat? That way, you don’t end up with gravel and sand in your reel. If you do get sand in the inner workings of the reel, it can be difficult or impossible to reel in the line.

Next, DO NOT try to thread your monofilament or fluorocarbon leader up through the guides. Instead, grasp the fly line itself, letting the leader droop off to the side. Next, fold your fly line in two, so that it creates a curve that looks like an upside-down “U.”

Then push that “U” through each of the guides, in order, until you get to the final guide, which is called (appropriately), the “tip top.”

By using this method, if you happen to let go of the fly line when you’re four or five guides into the process, the line will just rest there. If you’re trying to thread your leader up through those guides and you let go, all of your progress will be lost as the heavier fly line falls to the ground, pulling the leader with it.

Another tip that will save you some tears at some point: Don’t bend the rod from the top so that you can reach the last few guides. Do that on a cold day (which I once did) and you’re apt to end up breaking the tip of your new fly rod clean off. Rods are often nine feet long, so they’re taller standing straight up than you can reach. Simply tilt the rod to the side so that it’s at a 45-degree angle to the ground and slide the fly line through each guide as you go.

After all, nobody wants to see you cry.