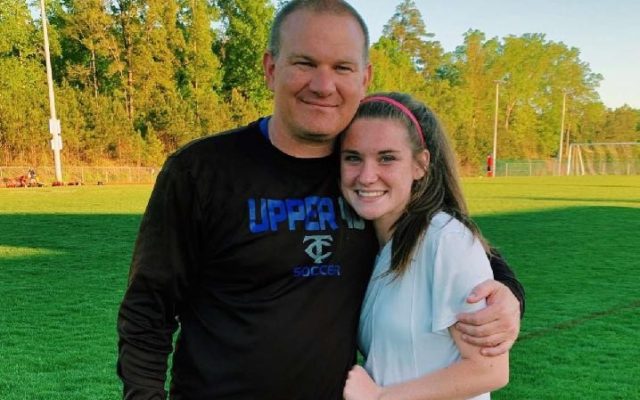 Larry Mahoney, Bangor Daily News Staff • June 26, 2020
DOVER-FOXCROFT — John Cornett was the 1990 LTC Class C Player of the Year as he rushed for 1,050 yards and passed for 305 yards as the quarterback at John Bapst Memorial High School in Bangor.    The safety also was the leading tackler and made three interceptions for the Crusaders, who were coached by his father, Don.

DOVER-FOXCROFT — John Cornett was the 1990 LTC Class C Player of the Year as he rushed for 1,050 yards and passed for 305 yards as the quarterback at John Bapst Memorial High School in Bangor.

The safety also was the leading tackler and made three interceptions for the Crusaders, who were coached by his father, Don.

But he also has an extensive soccer background after spending six years living in Germany, where his dad served in the U.S. Army. This fall, he will call on that background as the head coach of the Foxcroft Academy boys soccer team.

The 47-year-old Cornett replaces Luis Ayala, who stepped down this spring for family reasons. 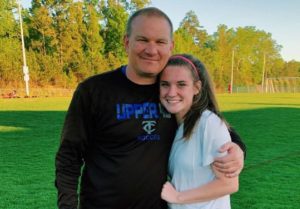 Photo courtesy of John Cornett
NEW COACH — John Cornett has been hired as the boys soccer coach at Foxcroft Academy. He is pictured here with his daughter Taylor.

“First, I hope the season happens. I’m a little worried about that,” Cornett said, referring to concerns about the COVID-19 pandemic.

“I’m excited. My wife [Kelly] and I had wanted to move back to Maine for 15 years. Last year was the first time we had the opportunity and we jumped on it,” he said.

Ayala led the Ponies to 104 wins in 19 seasons and last year’s team reached the Class B North semifinals as the 10th seed after upsetting No. 7 Waterville and No. 2 Winslow.

He actually played soccer for SeDoMoCha after moving to Dover-Foxcroft in eighth grade before switching over to football. He played two seasons for his dad at Foxcroft Academy and then accompanied Don Cornett to John Bapst for his junior and senior seasons.

Cornett, a 1992 John Bapst graduate, went on to play football at Carson-Newman University in Tennessee.

“The thing that stands out the most for me is his integrity,” Foxcroft Academy Athletic Administrator Tim Smith said. “He is a real genuine guy.

“I played for his dad in high school [at FA] and I’ve known the family a long time. They all have great family values,” Smith added.

Cornett is well-respected and is good working with youngsters, Smith said.

“Kids gravitate toward him. He’s a real solid family man and a good human being,” Smith said.

Cornett said he learned soccer playing with German kids. He coached football and soccer in Georgia before returning to Dover-Foxcroft with Kelly and their four children.

“Soccer is a spring sport in Georgia,” Cornett said, explaining how he could coach both sports.

He also coached basketball and track in Georgia and previously taught school and coached in Florida.

Cornett praised Ayala for the job he did with the Foxcroft program and in developing the Foxcroft Youth Soccer program. He intends to install a possession type of game like teams played in Georgia.

“You don’t see a lot of that up here,” Cornett said. “It’s more physical [and direct]. I like patient, possession soccer.”

He coached four of his five children in soccer and will have two of them on his team, junior Danny and freshman Josh.

‘I’m thrilled about that,” said Cornett, whose oldest son, Cody, is in the Air Force and didn’t play soccer.

Youngest son Austin will be in seventh grade and played with Josh for his father at SeDoMoCha.

Daughter Taylor also played for her father growing up and plans to play this fall for Southern Maine Community College in South Portland.