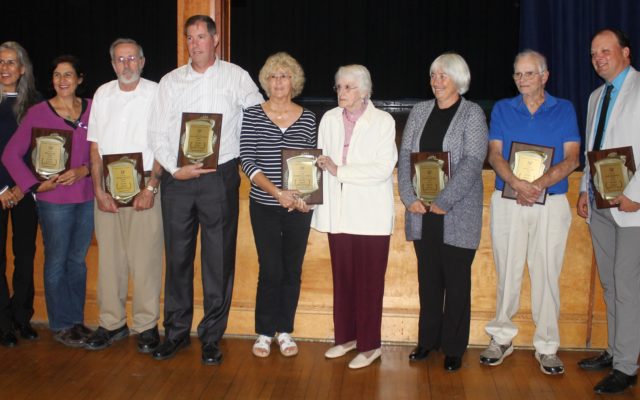 Stuart Hedstrom • October 2, 2018
The sports history of Piscataquis Community High School, previous secondary institutions, and the towns making up SAD 4 is now preserved in one place with the PCHS Athletic Hall of Fame. The inaugural class was formally inducted during an early evening ceremony in the gymnasium on Sept. 29 as part of the school’s annual homecoming festivities.

GUILFORD — The sports history of Piscataquis Community High School, previous secondary institutions, and the towns making up SAD 4 is now preserved in one place with the PCHS Athletic Hall of Fame. The inaugural class was formally inducted during an early evening ceremony in the gymnasium on Sept. 29 as part of the school’s annual homecoming festivities.

“We have a very exciting night as this is the first induction of our hall of fame, so we are making history,” PCHS Principal John Keane said.

He explained in March some interested parties came together and “after very little deliberation it was clear there was enthusiasm for the hall of fame.” He said the development group created by-laws “and shortly thereafter a second group was established, the nominating group. They had the lofty goal of getting the first class selected by homecoming this year.”

“We had 15 nominations right off the bat and from that the group are eight inductees,” Keane said.

Observer photo/Stuart Hedstrom
PCHS ATHLETIC HALL OF FAME CLASS OF 2018 — Members of the inaugural PCHS Athletic Hall of Fame class were enshrined during a ceremony at the Guilford school on Sept. 29. The PCHS Athletic Hall of Fame Class of 2018 is comprised of athletes Fred Blake, Peggy (Riitano) Genoa, and Kirk Kimball, coaches Dave Gaw, Donna Jordan, Charles “Rusty” Sweeney, contributor Joe Riitano Sr., and the 1946 Guilford High School Golden Panthers boys basketball team as inductees and others accepting on behalf of honorees were present to receive the plaques.

The principal said the PCHS Athletic Hall of Fame has three business sponsors, Herring Brothers of Guilford, the Kimball Insurance Company in Sangerville as well as “a third silent partner.” Keane said the three sponsors also were supporting the 2018 homecoming events, including a fireworks to follow an evening boys soccer played under portable lights in honor of the 50th year of the sport at PCHS.

Kam Kimball, a 1995 PCHS graduate and an owner at Kimball Insurance, introduced the eight members of the first PCHS Athletic Hall of Fame class.

Blake attended Guilford High School in the mid-1940s and he played basketball and baseball for the Golden Panthers. Blake now lives in Canada, and his daughters accepted the enshrinement plaque on his behalf.

The late Genoa starred for the PCHS field hockey, basketball, and softball teams during the first half of the 1980s. She went on to play basketball and softball at Husson College. Her brother accepted the hall of fame honor on behalf of the family.

Kirk Kimball was present and he was inducted for his talents on the golf course and basketball court during the early 1990s before becoming a PGA professional.

Donna Jordan led the PCHS field hockey program for over two decades, starting in the early seasons at the varsity level in the late 1970s.

The late Sweeney introduced soccer to PCHS in 1968 and coached the sport for the first dozen years of the program. He also coached cross country and track.

Riitano is the sole contributor in the first PCHS Hall of Fame class. Riitano’s nine children, including Genoa, all played three sports for the Pirates, and he has been involved in high school and youth athletics in the area for four and a half decades.

Kam Kimball said the 1946 basketball squad is the first team to be enshrined. The 1946 Golden Panthers won a county championship and finished as the Eastern Maine runners-up. Reading a newspaper article from the time, Kimball described how the basketball team lifted the spirits of thousands and including members of the military inquiring about the squad’s fortunes in letters senhome.

The wife and daughter of one of the late team members were present to accept the hall of fame plaque for the basketball team.

Keane said he and Athletic Director Joe Gallant had talked about ways to expand the athletics program in addition to the hall of fame to create more enthusiasm and excitement. Keane said there is a new weight room in the building to help the athletes improve and reach the next level.

He said there is now a high standards academic policy for student-athletes “because we wanted to let our athletes know academics is No. 1.”

Keane invited everyone present to attend the first-ever night soccer game in school history recognizing the half century of Pirate soccer.