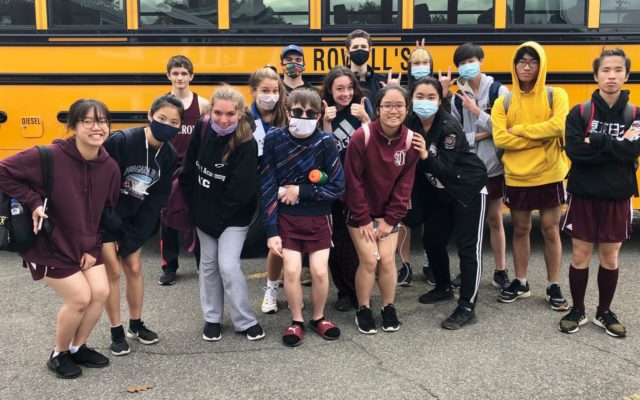 The Maine Principals’ Association on Friday, Oct. 16  announced dates for this year’s high school cross country state championship meets. The boys are set to run on Wednesday, Nov. 11, and the girls compete on Saturday, Nov. 14.

Both three-class meets will be held at the Troy Howard Middle School in Belfast, as this year is the North Region site’s turn to host.

Holding the event over two days instead of the usual single-day, six-race extravaganza is among the ways organizers will be able to stage the championships while complying with the state’s COVID-19 outdoor mass-gathering limit of 100 people.

With many students slated to take the Scholastic Aptitude Test on Nov. 7, and with the number of Saturdays limited before the Nov. 14 end date of the fall sports season, MPA cross country committee members chose Veterans Day to help resolve the time crunch.

The use of the holiday also prevents student-athletes from losing class time at a time when the beginning of Daylight Savings Time on Nov. 1 brings nightfall earlier.

“We knew we were going to have to do two days with the shortness of daylight for all six races,” MPA Assistant Executive Director Mike Bisson said.

That allows time for teams to arrive at the course no earlier than one hour before their race, compete and then leave the site immediately after the awards ceremony in order to keep the venue under 100 people at any given time, Bisson said.

No fans will be allowed on site, but the MPA is working to provide a live stream of all state championship races.

Large regional qualifying meets that normally advance top runners and teams to states will be replaced this year by smaller conference qualifying meets around the state. That will help with the gathering limit and will reduce travel for many schools.

“Our committee worked with each league’s representatives trying to get a sense of how many schools have full teams and how many of the schools in their leagues would want to compete at the state championship,” Bisson said. “We looked at those numbers and are taking a percentage [from each conference].”

The Kennebec Valley Athletic Conference Class A qualifier, which will include Bangor, Brewer and Hampden Academy — will be held Oct. 31 at Cony High School in Augusta, while the league’s Class B schools will seek to qualify on the same date in Belfast.

The Aroostook League will hold its Class C qualifying meet at 10 a.m. on Oct. 24 at Caribou High School. The County’s two Class B schools, Caribou and Presque Isle, will run in the PVC qualifier.

With York County schools now eligible to compete, the Southwestern Maine Activities Association that includes those programs will advance the top five teams from its qualifying meet and the top two individuals from non-qualifying schools to the Class A state championship.

The KVAC will send its top four Class A teams and top four individuals from non-qualifying schools to states.

In Class B, the PVC, KVAC and the Western Maine Conference each will qualify its top three teams and two individuals from schools that don’t advance.

“We can’t exceed nine teams [in any class] because when you start adding in your course workers, timing crew, athletic trainers, the chase vehicle, and you’ve got nine coaches plus the individuals, it really limits it quickly,” Bisson said. “Nine is our magic number, really.”