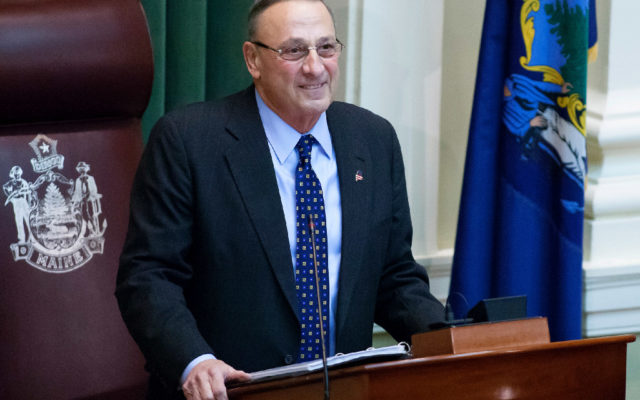 Jessica Piper, Bangor Daily News Staff • July 6, 2020
Former Gov. Paul LePage is out of office, but his seal of approval is on the ballot in next week’s Republican legislative primaries, backing three insurgents over the candidates preferred by party leaders in the Maine Senate.

Former Gov. Paul LePage is out of office, but his seal of approval is on the ballot in next week’s Republican legislative primaries, backing three insurgents over the candidates preferred by party leaders in the Maine Senate.

Republicans have only nine contested legislative primaries on the July 14 ballot across Maine as they look to make inroads against Democrats who stormed to full control of Augusta in the 2018 election. Since then, the party has been frustrated and unable to exert much influence in the State House, particularly since the Legislature adjourned in mid-March due to coronavirus.

LePage, who recently returned to Maine after a brief stint as a Florida resident, has long floated challenging Gov. Janet Mills in 2022 and told the Bangor Daily News last month he was “99.9 percent” certain he would face her then. He was often frustrated by a more moderate group of Republican lawmakers — particularly in the Senate — during his eight-year tenure.

His three endorsements could be seen as trying to shape an arch-conservative group of Republicans or settling scores. Here are the major races and themes to watch for. You can also use the interactive tool below to see if you have a competitive Republican primary in your area.

LePage has backed a controversial figure as Senate Republicans spend to defend an incumbent.

The incumbent perhaps most in danger is Sen. Kim Rosen, R-Bucksport, in a district stretching from Castine to Lincoln since 2012. Facing her is Rep. Larry Lockman, R-Bradley, who has a history of incendiary comments, including a letter from the 1990s asking why rape is not legal since abortion is and saying in 2018 that Democrats are waging a “war on whites.”

LePage formally endorsed Lockman at a Brewer event last summer. When asked about his past remarks last month, the former governor told the Ellsworth American that Lockman “always took the financially prudent path.”

Rosen, currently serving her third term in the Senate after eight years in the House, is backed by Republican legislative leaders. Her husband, Richard Rosen, served in the seat before her and was LePage’s budget commissioner until a sudden 2017 resignation rumored to be a firing.

The Senate Republicans’ political committee has also spent nearly $10,000 on mailers and online ads to support her, according to state data, touting her endorsement from the National Rifle Association and her support for the policies of LePage and President Donald Trump.

Republicans are hoping to avoid a repeat of 2016, when two LePage-backed challengers beat out establishment candidates in primaries but then lost to Democrats in the general election. The district leans Republican, but Democrats made Brewer a point of emphasis in the 2018 election. A Lockman nomination could lend momentum to their campaign.

LePage has endorsed in two other races, though his influence is murkier.

In a district that covers Piscataquis County and parts of Somerset and Penobscot counties, Sen. Paul Davis, R-Sangerville, is facing former Sen. Doug Thomas, R-Ripley. In 2014 as a representative, Davis challenged Thomas, who was the incumbent senator, and won.

This time, Davis said he was surprised to see Thomas run against him. Thomas said he did not realize Davis was running when he announced his campaign. The senator was listed as the treasurer for a Republican candidate who later dropped out. After that, LePage endorsed Thomas. That support has sparked a strange controversy.

In a June exchange of letters to the Piscataquis Observer earlier this month, a Davis supporter accused Thomas of misrepresenting the governor’s support for his campaign. LePage’s support is meaningful in the district, which is among the most conservative in the state.

A spokesperson for LePage said although the governor was not aware that Davis was running when he endorsed Thomas, he has not withdrawn the endorsement. Davis said LePage gave him permission to use several of the former governor’s statements about him, including one referring to him as the “best friend he ever had in the state legislature.”

The incumbent, a former state trooper who is term limited after 2022, said his priority for his next two years in office would be addressing the budget crisis created by the pandemic to ensure that municipalities do not have to raise property taxes. Thomas, who owns a firewood business, wants to improve infrastructure and access to vocational education.

LePage has also endorsed John Linnehan, a businessman running under the slogan “Make America Godly Again” over former state Sen. Brian Langley, R-Ellsworth, a restaurant owner, in a swing district that was easily won by Sen. Louis Luchini, D-Ellsworth, in 2018.

Linnehan has focused his campaign around his concern that the country has strayed from its founding principles and that constitutional rights, such as freedom of religion, are being eroded. Langley said he was unconcerned by LePage’s endorsement and that the pandemic has highlighted the need for candidates with policy experience to “help get our state back on track.”

There are a handful of other primaries notable for other reasons.

The only other incumbent facing a primary challenge is Rep. John DeVeau of Caribou, who called for Gov. Janet Mills’ impeachment despite opposition from party leaders. He is faced by  Sue Bernard of Caribou, a former hospital administrator and spokesperson for the Roman Catholic Diocese of Portland in a heavily Republican district.