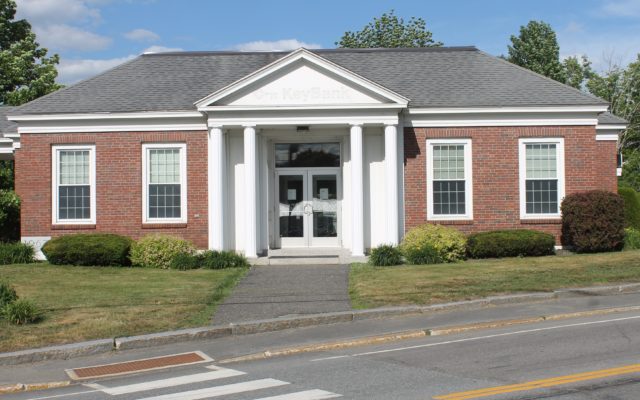 Stuart Hedstrom • June 30, 2020
MILO — When county residents head to the polls on Tuesday, July 14 they will be voting on a pair of state bond questions, political party primaries when applicable and a question concerning a bond to purchase the former Key Bank building in downtown Guilford to be the new home of the sheriff’s office patrol and investigation divisions. The $145,000 purchase price, which would have come with an additional $29,100 in interest over a decade, will be covered by a benefactor giving back to the county.

MILO — When county residents head to the polls on Tuesday, July 14 they will be voting on a pair of state bond questions, political party primaries when applicable and a question concerning a bond to purchase the former Key Bank building in downtown Guilford to be the new home of the sheriff’s office patrol and investigation divisions. The $145,000 purchase price, which would have come with an additional $29,100 in interest over a decade, will be covered by a benefactor giving back to the county.

“We have an anonymous donor that on the seventh of July will present us a check for $145,000,” Piscataquis County Commissioner Wayne Erkkinen said during a June 29 public hearing on the bond question at the Milo Elementary School. “That’s the confidence they have in our sheriff’s department.”

County Commissioners Chair James White said after the last commissioners meeting, the donor contacted Piscataquis County Sheriff Bob Young about their willingness to pay the purchase costs so county residents would not have to. White said the benefactor did request that the former bank building at 2 Hudson Avenue always remain a home for patrol deputies.

The commissioners chair said county officials wish they could reveal the identity at the present time, but are waiting until the next regular meeting on Tuesday, July 7. 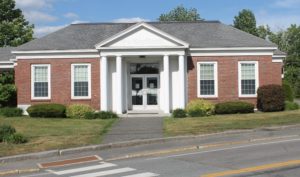 Observer photo/Stuart Hedstrom
POTENTIAL SHERIFF’S BUILDING — On Tuesday, July 14 Piscataquis County residents will be voting on a bond question for the county to purchase the former Key Bank building on Hudson Avenue in Guilford to become the new home of the patrol and investigation division of the Piscataquis County Sheriff’s Office. An anonymous donor has come forward and is planning to cover the $145,000 purchase cost.

County Manager Michael Williams began the public hearing — the third of four held across the region — by reading the question which was written several months ago. The question reads, Do you favor a $145,000 bond issue to purchase the former Key Bank building, located at 2 Hudson Avenue in Guilford, Maine, in order to relocate and provide infrastructure for the patrol division of the Piscataquis County Sheriff’s Department?

In his presentation Piscataquis County Sheriff’s Office Chief Deputy Todd Lyford explained the downtown Dover-Foxcroft home of the department was built in 1901 and the jail began as an attachment to the residence occupied by the sheriff. He said in 1989 a new jail opened and the communications division of the sheriff’s office moved inside the new corrections space while the patrol division occupied the former jail living area.

Lyford said the building cellar was used for evidence storage. “It gets wet and it’s not very much space, and it wasn’t really made for people to be down in there,” he said.

“In 2015 the sheriff’s department and the county hired an architect to design a new building,” the chief deputy said. Using crews from the Charleston Correctional Facility for some interior work, the cost would have been around $700,000 but a bond question for a new facility on the East Main Street county campus was voted down.

“Our jail is very unique as we have our communications center in the jail,” Lyford said, saying this department could move to the Key Bank building in the future.

Young mentioned in 1989 9-1-1 calls would be answered by officers working in the jail but “since then it’s been much more complicated.” He said the two dispatchers working answer 9-1-1 calls, which involve going through a series of questions, while also answering the inmates’ intercoms and “keeping eyes on corrections officers to make sure they’re safe.”

Lyford said two years ago the patrol and investigations division moved to the former Guilford Primary School building. “Although this is an upgrade, it still lacks a lot for our needs,” he said, such as lack of storage space, evidence collection area and space for private interviews.

The chief deputy said the courts are looking at alternative sentencing to alleviate crowded jails for lesser crimes, such as shoplifting. He said law enforcement agencies need to provide educational programs classroom space, something the sheriff’s department lacks at the present time.

“We feel this building has the potential to do everything we need,” Lyford said. He said the approximate 7,200-square feet between the first floor and lower level will provide room for deputies to work, evidence processing and storage and expansion if need be.

“The other issue is it’s in Guilford,” Young said. “For us 70 percent of our calls are in that general region.”

“We think it’s just an ideal building for now and to provide for future needs,” the sheriff said, saying he and Lyford would remain based out of Dover-Foxcroft.

“The building is in ready to move in condition,” White said. “Key Bank never closed the building down, it was heated over the winter and the lawn was mowed on schedule.”

“Our goal is to find a permanent home and that’s a permanent home as long as any of us work there and well beyond that,” Young said. “This will allow some good working room and make their job a whole lot more efficient.”

The sheriff said he has been asked about officers needing an office when their job is to be on the road. He explained that there is a significant amount of paperwork for policing, such as search warrants, and this cannot be done from a patrol vehicle.

White explained that the July 14 referendum question asks residents to approve the issuance of bonds for the structure. “Either way, if we are defeated that doesn’t prohibit us from accepting that donation,” he said about the $145,000 to cover the purchase costs.

While the ballot question was written and approved by the Secretary of State well before the donor came forward, county officials are working to get the word out to voters before they head to the polls.